Max Verstappen about his future: 'Everything that comes now is a bonus'

Published on 17 December 2021 by Mike Motilall 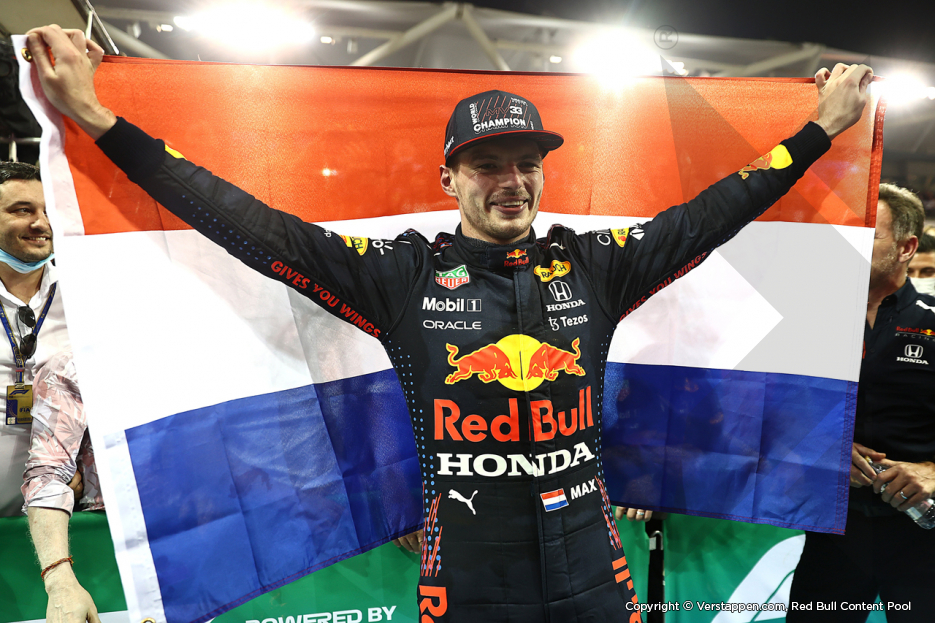 After a short night and with almost closed eyes, Max Verstappen and his father Jos were featured in the podcast of their partner CarNext a few days after the season’s finale in Abu Dhabi. Host David Coulthard reflected with the newly crowned world champion and his ‘proud as a peacock’ father on a tumultuous season with a glorious finish.

Jos how do you feel after the championship of your son?
Jos: ‘I almost can’t believe that we did it, but it’s a great feeling. Especially after a year like this. If you look at everything that happened during this season, all the bad luck Max has had, that made it so intense. And then it comes down to the final race of the season, even the final lap. You cannot write a script with such a result. It’s insane. I am very proud of Max. To see your son achieve something like this, it’s so emotional.’

Max, you are the Formula 1-worldchampion. How do you look back on the season?
Max: ‘It was a very busy season, so I am happy that it’s over, but it was of course a fantastic end of the season. Nobody could have written this better, but if I would have to do this again, I would not choose for this. I don’t need to improve on this. It doesn’t need to be like this every single year. I don’t think you will last that long in Formula 1. A lot of unpredictable things happened. Two teams fighting against each other, that is always more exciting that when only one team is dominating and only the two team mates are fighting each other.’

How did you deal with the tension before the final race?
Max: ‘Normally I am not nervous for any race, but now I was. Everyone was tensed and was looking forward to the race. The race itself was not looking great, we really didn’t have the pace, but everything went upside down on the last lap. On the final lap you saw me make the move, but I had a cramp. I could almost didn’t go full throttle, because my leg was really painful. You are very tensed and your muscles are cramping up, so I had to deal with that on the last lap. It was very tough.’ 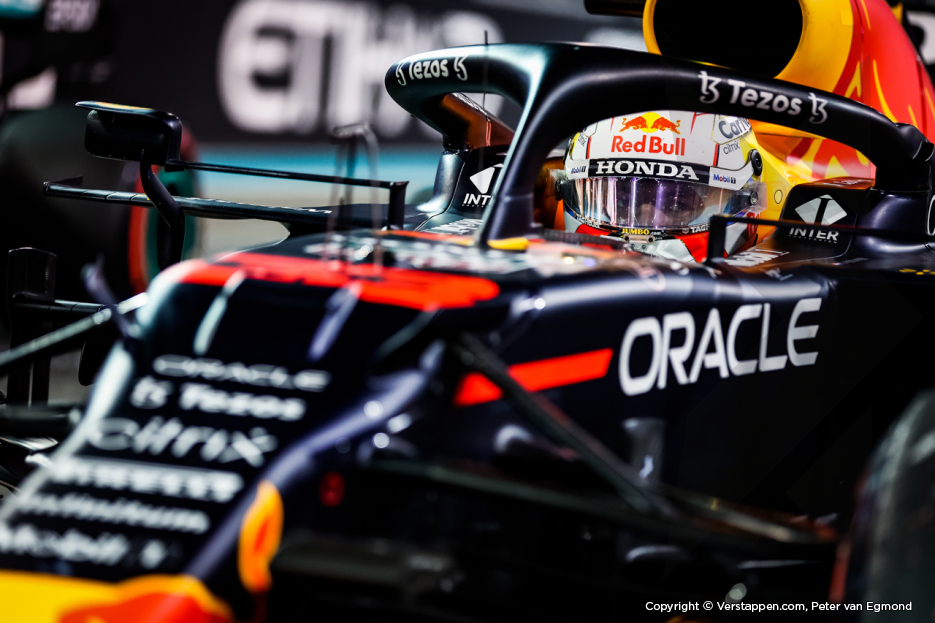 Did you ever think that the championship was slipping away from you?
Max: ‘Of course it didn’t look good throughout the race. Hamilton was clearly faster, but I said to myself: it doesn’t matter, I am just going to push regardless and I’m not going to give them a big gap. Basically because of that, because of the small gap, they never had a free stop to get back on track ahead of us. It gave us that flexibility even though we were too slow, we were always in their pit window. That gave us the opportunity to put on new tyres. I was hoping for a miracle and it came. At the end I was able to change to the soft tyres while Hamilton was still on his old hard tyres.’

On the final lap in Turn five, you went for it, before the straight. From the outside it appeared too soon because two more straights followed.
Max: ‘I knew I had better topspeed. So I thought, as soon as I am ahead then I can control the defense. When you are behind someone, he can always close the door, you are then not fully in control. So I needed to send it in Turn five and then I am in control.

How were the final laps for you Jos?
Jos: ‘During the race I left the Red Bull Racing pitbox and went somewhere else where it was quiet. Eventually Raymond (Vermeulen) came to join me. I also didn’t have the feeling that it was going to happen. Then Nicholas Latifi crashed with still five laps to go. We were hoping again and were jumping and were happy. Then the backmarkers were allowed to overtake and there was just one more lap to go. Everyone knows that Max would try something, whatever happens. We were thinking where he would do it and he did it at Turn five, what I didn’t expect. Then Lewis came alongside him at the new fast corner. It was so exciting. I had tears in my eyes.’

As you were celebrating, there was of course disappointment for Lewis Hamilton. Do you have respect for Lewis and the way he dealt with losing?
Max: ‘The whole team was going crazy, but you also have the other side where the whole team is disappointed. What was nice of Lewis is that he immediately came to me to congratulate me and I said to him: ‘Thank you very much for an amazing season’, because at the end of the day it was an amazing season. We did push ourselves to the limit but also the cars and the teams too. Everyone is happy that the season is over and that we can have a bit of a break, because it was very intense and tough on everyone, but it was definitely great rivalry.’

Jos adds to that: ‘When I was sitting with Max before he went up to the podium, Anthony (Lewis Hamilton’s father) came there too and congratulated us. That was really nice. Also during the season I had some conversations with him over Whatsapp. He is nice and respectful. They have won seven titles already, so for him it was different than for us winning our first title.’ 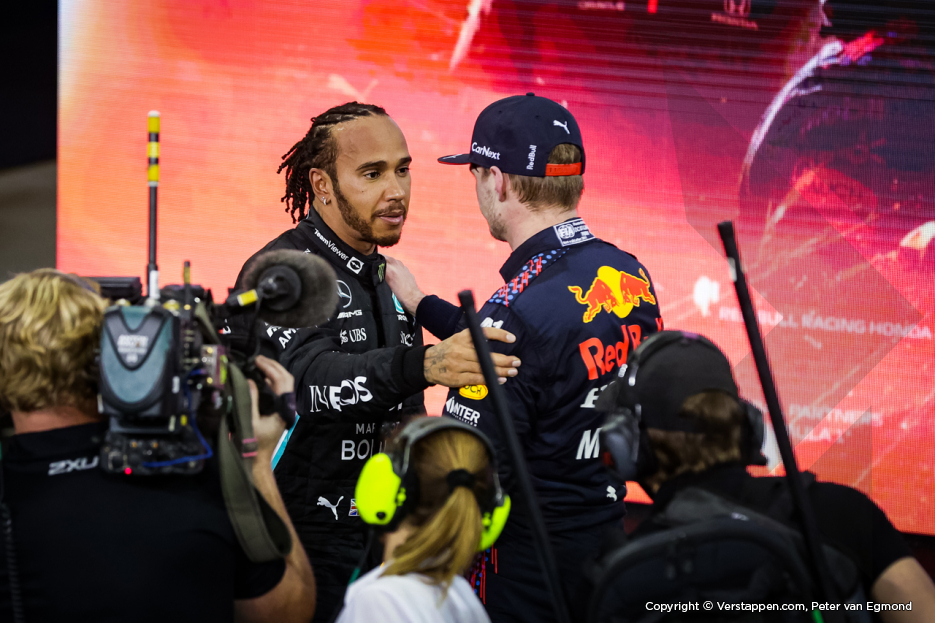 Beside the many fans you have worldwide, there are of course also people who aren’t. How do you deal with criticism?
Max: ‘I always try to stay neutral. When people are very positive, that is of course nice to hear, but I don’t take a lot out of it and also when people are negative I do the same. I always try to stay levelled so nothing can really disturb me. Especially throughout this year that was very important. Of course you have the two sides in general, so when you stay very neutral nothing can really affect you.’

How do you view the future now that you have achieved your main goal? Do you also want to achieve seven championships like Lewis?
Max: ‘Everything that comes now is a bonus. I am just going to enjoy it. You also need a bit of luck to be able to fight for seven championships. You need a very dominant team to be able to do that. You don’t always have that luck. I always wanted to win a championship and then see where I go from there. And like I said, everything that comes now is a bonus, that doesn’t mean if I lose a race I still won’t be disappointed, but it will maybe last for a couple of minutes after then I will be like ‘it’s okay’.’

The video of the entire interview can be watched here: