Max Verstappen finishes testing in Bahrain as quickest: 'Everything is positive' 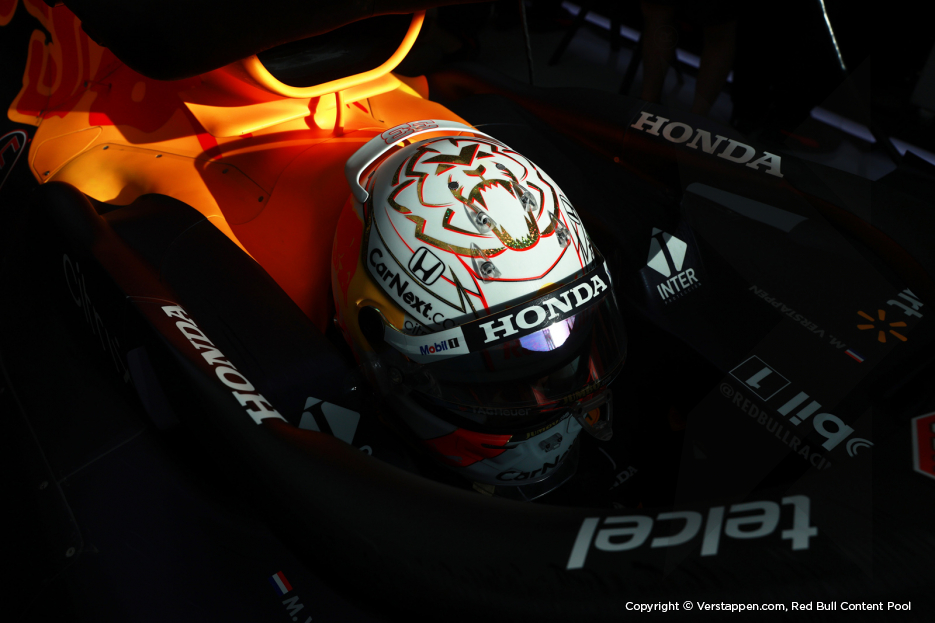 Max Verstappen finished pre-season testing in Bahrain with the quickest time. During the third and final testing day before the start of the season, Max took his seat in the Red Bull Racing RB16B in the afternoon session. The focus of the first half of the afternoon was mainly on race pace, during the last part of the afternoon the pace was increased, and Max set a 1:28.960 on the soft C4 compound tyre. In the end the quickest time of all three days of pre-season testing. The Dutchman did 64 laps during the session. Yuki Tsunoda, the Japanese debutant for AlphaTauri, was narrowly slower than Verstappen and finished second, while Ferrari driver Carlos Sainz finished third.

After the session Max says: “We did our programme and I have a positive feeling about the car. The car is a bit more predictable, and I like that. We did not have any issues and we will leave here without major question marks. The balance of the car was good. That can be different in a race weekend, and we do not know what the other teams are doing with fuel, but at least the feeling was positive.”

Questioned if Max will pace himself in the opening race, he says: “I am always calm. You can only get the best from yourself and the rest is up to the car you have on the grid, but up to now everything is positive.” 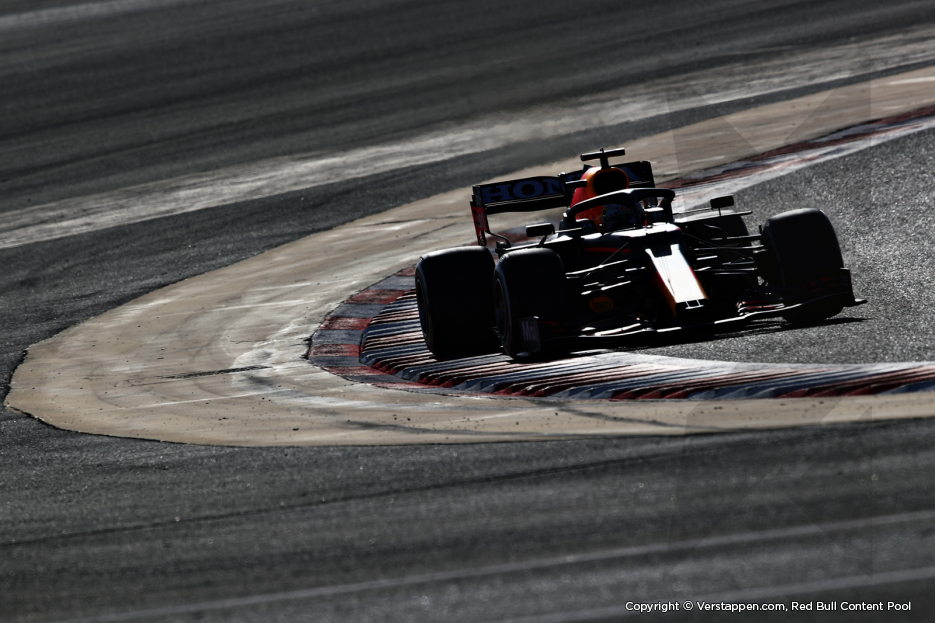 In the afternoon session Max Verstappen takes over from his new teammate Sergio Perez, who set the quickest time in the morning session. Most other teams also change driver after the lunch break. Only Kimi Raikkonen and George Russell drive all day. Daniel Ricciardo in his McLaren is the first to enter the track after the lunch break, quickly followed by Kimi Raikkonen and Sebastian Vettel. After ten minutes Max comes out on track for the first time today with a set of the medium C3 compound tyres on his RB16B. Max has a small ‘aero rake’ fixed to the right barge board of his car to analyse the air flows around the car. Max returns to the Red Bull pits after seven laps.

Max returns to the track after a short stay in the garage. With a set of hard C2 tyres he sets his first lap time, a 1:31.733 puts him in ninth position. At the start of the afternoon the Mercedes engineers are busy working on the W12 of Lewis Hamilton. The Brit finally comes out on track, when the session is already an hour underway.

Yuki Tsunoda spins his AlphaTauri in Turn seven. The Japanese rookie can continue without issues and returns to the pits with flat spots on his tyres. Meanwhile Max comes out on the hard C2 tyres. There is ‘flowviz’ on the right sidepod of his RB16B to identify the air flows. Max improves his time (1:31.426) but stays in ninth position. Max diligently continues driving laps on the hard tyre; he does 32 laps with more than two hours to go before returning to the pits. 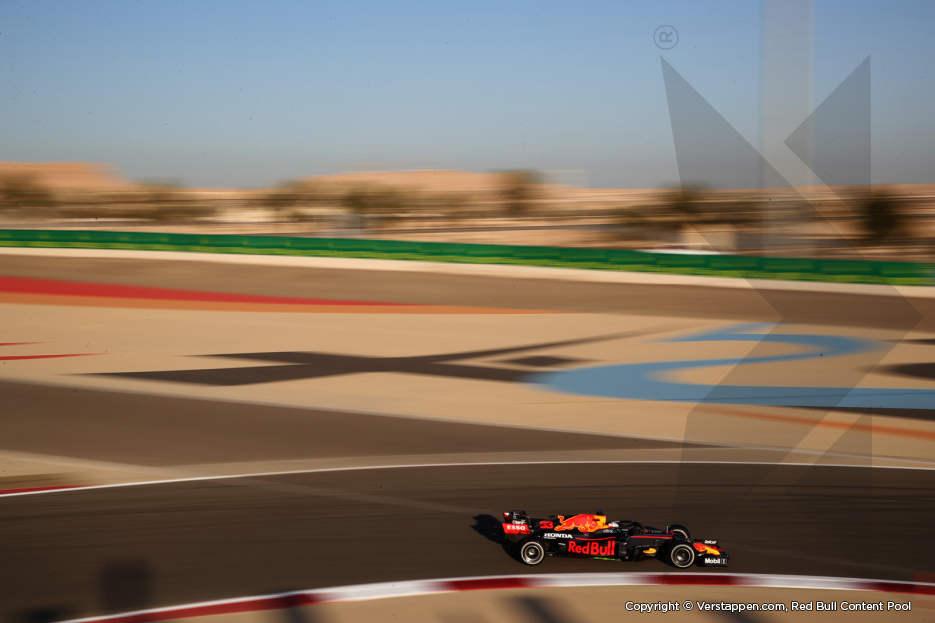 Max comes out on track with the C3 prototype tyres from Pirelli when the afternoon session is past the halfway point. Straight away Max goes quicker than the time set by his teammate Perez. With a time of 1:29.942 he is the first driver during pre-season testing to dive under the 1 minute 30. The Dutchman returns to the pits after six laps on the prototype tyres. Then Daniel Ricciardo goes to second position on the soft C4 tyres, two tenths slower than Verstappen.

With less than one and a half hours to go, Max comes out on track again on a set of the C3 prototype tyres. The Red Bull driver improves his time by one and a half tenths to a 1:29.792 in a solid first position. The Aston Martin team has issues for the second day in a row. Yesterday Vettel could only drive ten laps before having issues with the gearbox, today the German stays in the garage for the last two hours of the session with technical issues.

Even though Max can improve his time by a couple hundredths of a second in a new run on the C3 tyres, both Yuki Tsunoda (AlphaTauri) and Kimi Raikkonen (Alfa Romeo) decide to put the soft C5 tyres on their cars, going quicker than the Dutchman. Then Verstappen goes quicker again on the soft C4 tyres and sets a time of 1:28.960, putting him back in first position.

At the end of the session nobody gets close to Max’ time, who finishes the pre-season testing as quickest. Yuki Tsunoda is a fraction slower than Max and finishes second. Carlos Sainz sets the third time, followed by Kimi Raikkonen in fourth. At the end of the session Sainz and Raikkonen clash, even touching lightly in Turn ten. Lewis Hamilton completes the top five in his Mercedes. With Max going 64 times around the Bahrain International Circuit, Raikkonen does the most laps. The Finn does no less than 166 laps. George Russell is also driving well with 158 laps during his only testing day for Williams. The AlphaTauri team does the most laps of the day with 91 laps for Yuki Tsunoda and 76 laps for Pierre Gasly. 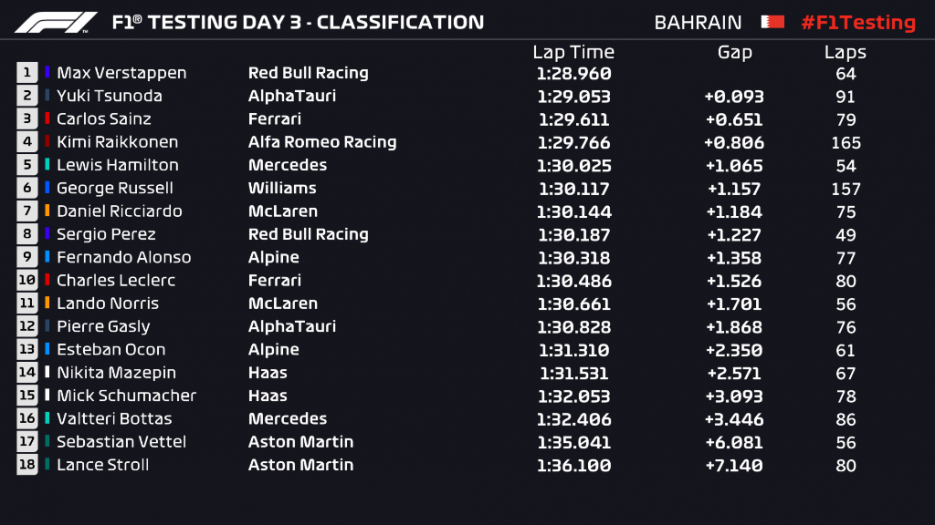