Max Verstappen second in Bahrain GP: 'You have to see the positive' 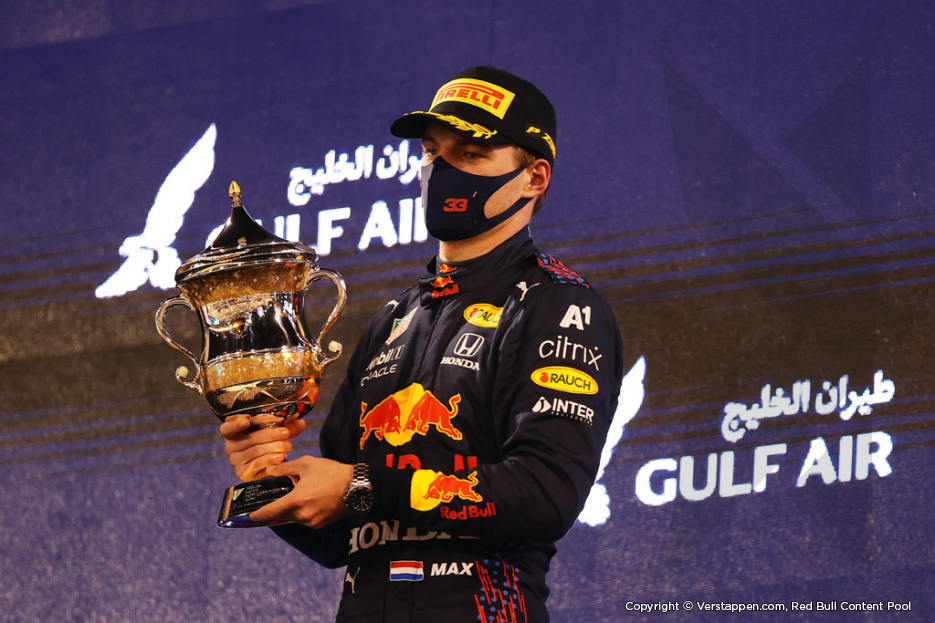 Max Verstappen finished second in a thrilling season opener. Starting from pole, Max stays in the lead for the first part of the race. Because Hamilton is on a different strategy than the Dutchman, the Brit gets into the lead. At the end of the race Verstappen was eating into Hamilton’s lead. With three laps to go Max overtook Hamilton, but race control tells him to give the place back to the Mercedes driver because of running too wide. Subsequently Max does not get another opportunity and has to settle for second position behind Hamilton. Valtteri Bottas completes the podium.

After the race Max says about his second place: “Of course it is a shame, but you have to see the positive. We are really putting the fight on Mercedes and it is great to start the season like that.”

Early in the race Max reports issues with his differential over the radio. The Red Bull Racing driver explains the issue: “When accelerating, one wheel spins a bit more than the other. It improved a bit after making some changes, but I do not think we completely solved it for the slower corners. It is not what you want, so we have to look into that. In the end we finished the race and scored good points.”

Verstappen was on a different strategy than Hamilton and came out behind the Brit each time after his pitstops. Verstappen says: “It is hard to overtake here as it turned out. Normally you always have to make sure you keep track position, but we could only take this strategy, while Mercedes had a bit more choice. For next time we have to see how we can do this better concerning the tyres.”

Immediately after passing Hamilton the team instructs him to give the place back because the Dutchman went wide, Max would have liked to do it differently: “I had rather finished first and getting a penalty afterwards, than finishing second like this. That is how I see it, but you do not have to agree with me. In the end this is only the first race of the season. That it hurts so much now is a good sign. Last year we would have been very happy with a result like this.” 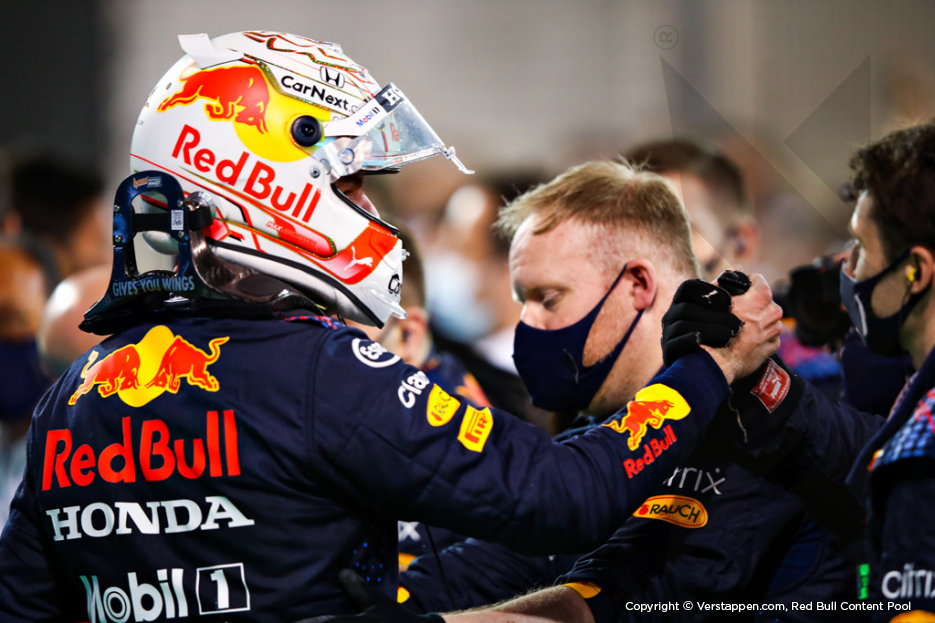 There is a strong wind at the start of the first race of the season at Bahrain International Circuit. It is the debut race for Yuki Tsunoda (AlphaTauri), and the Haas drivers Mick Schumacher and Nikita Mazepin. During the formation lap Sergio Perez comes to a halt in his Red Bull just before the last corner. Perez can get the car moving again but must start the race from the pitlane.

Max has a good start from pole and stays in the lead when entering the first corner. Mazepin’s debut race ends quickly when he spins of the track in turn three and smashes into the wall. The Russian can step out of his Haas unharmed and is the first retirement of the year. The Safety Car comes out on track. Max is in the lead with Lewis Hamilton and Charles Leclerc behind him.

In lap four the Safety Car goes back in and at the restart Max stays in the lead. Further back Pierre Gasly touches the rear of Lando Norris, losing his front wing and having to go to the pits. Mick Schumacher spins in turn four but can continue.

There is a short Virtual Safety Car situation, after which the race gets underway again quickly. Max reports issues with the differential over the radio, but it does not stop him to set the fastest lap in the following laps. The Ferrari of Charles Leclerc is overtaken by Valtteri Bottas for third position, after which also Lando Norris overtakes the Monegasque. 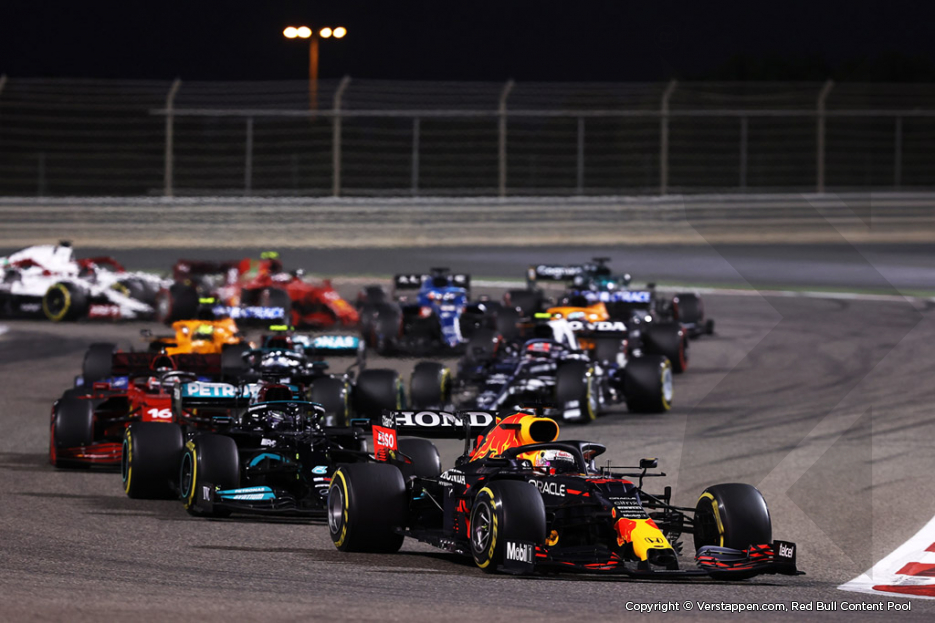 Fernando Alonso opens the pitstop dance in lap twelve. Multiple drivers are on the soft tyres and follow his example a lap later. Hamilton comes in for a tyre change to the hard tyres in lap fourteen. The Brit returns to the track in fourth position. Hamilton quickly overtakes Carlos Sainz for third position and closes in quickly on Bottas and Verstappen. The Finnish teammate of Hamilton goes in for a pitstop in lap seventeen, after which Hamilton is in P2. Max goes in the pits in lap eighteen and changes his medium tyres for a new set of the same compound. Verstappen comes back on track in second position, seven seconds behind Hamilton.

Verstappen is within two seconds of Hamilton when the Mercedes driver goes into the pits for the second time in lap 28. Again the Brit gets a new set of hard tyres. Now Max is in the lead again. Bottas goes in for his second pitstop in lap 31, but because the right front tyre does not come off the stop for the Finn takes more than ten seconds. Alonso has to park his Alpine in the pits with braking issues. The Spanish world champion of 2005 and 2006 is the second to retire.

Max goes in for his second pitstop in lap 40. The Dutchman gets a new set of the hard tyre on his RB16B and comes back on track in second position, more than eight seconds behind Hamilton in the lead. Verstappen closes in quickly on Hamilton. Meanwhile, Perez who started from the pits, has moved up the pack and is in sixth position when he overtakes Daniel Ricciardo in lap 44. Meanwhile in turn one Sebastian Vettel ploughed into the rear of the Alpine of Esteban Ocon. Both drivers spin but can continue the race.

In the final phase of the race Verstappen closes in on Hamilton. With only five laps to go Max is within one second of Hamilton, allowing him to use DRS. In lap 53 Max takes the lead from Hamilton in turn four but is forced by race control to give up his position because he went wide when overtaking. Max does not get another opportunity in the final laps of the race. Max finishes in second position only seven tenths of a second behind Hamilton who wins the race. Bottas finishes third and takes the point for the fastest lap. Norris finished fourth, while Perez finished in fifth position. Leclerc is sixth followed by Ricciardo and Sainz. Rookie Tsunoda takes two points in the debut race in nineth position, as Lance Stroll completes the top ten.