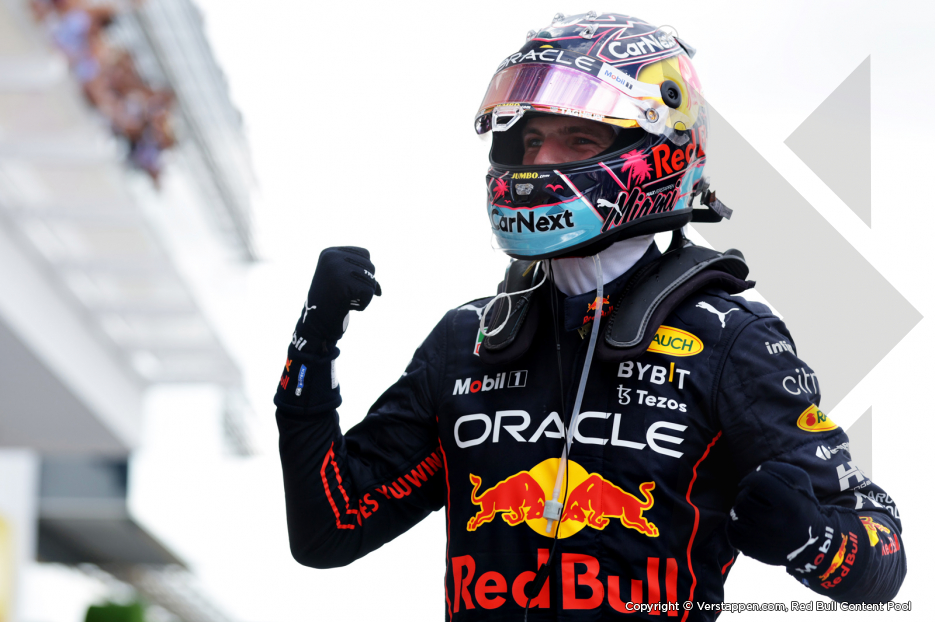 Max Verstappen won the first Miami Grand Prix. From third place on the grid Max could overtake Carlos Sainz immediately at the start for P2. Next Verstappen closed in on leader Charles Leclerc to overtake him in lap nine in the first corner. From there on Verstappen steadily increased the gap during the rest of race. But this lead was wiped out by a Safety Car, after which Verstappen had to work hard in the last ten laps to keep Leclerc behind. Max succeeded and won his third Grand Prix of the season. The Ferraris of Leclerc and Sainz finished in P2 and P3, while Sergio Perez finished as fourth.

After the race Verstappen says: “Incredibly happy with winning here in Miami and an incredible Sunday for us. This victory was great, but very hard. After fifteen laps I started to count down laps, it was very hard physically.”

In the first phase of the race Max was clearly quicker than the Ferraris. The first stint was the key to the victory, according to the Dutchman: “We won the race because of the medium tyre. We had a better pace and were able to create a gap. On the hard tyre we were much closer. But it also was very hard to stay consistent, I did not want to push too hard and ending up having tyre issues in the last ten laps.

Verstappen continues: “The Safety Car at the end did not help, otherwise we would have controlled the race, but it made it exciting for everyone. In the end it was quite difficult the first couple of laps after the Safety car, but when I had some temperature in the tyres it went well again.” 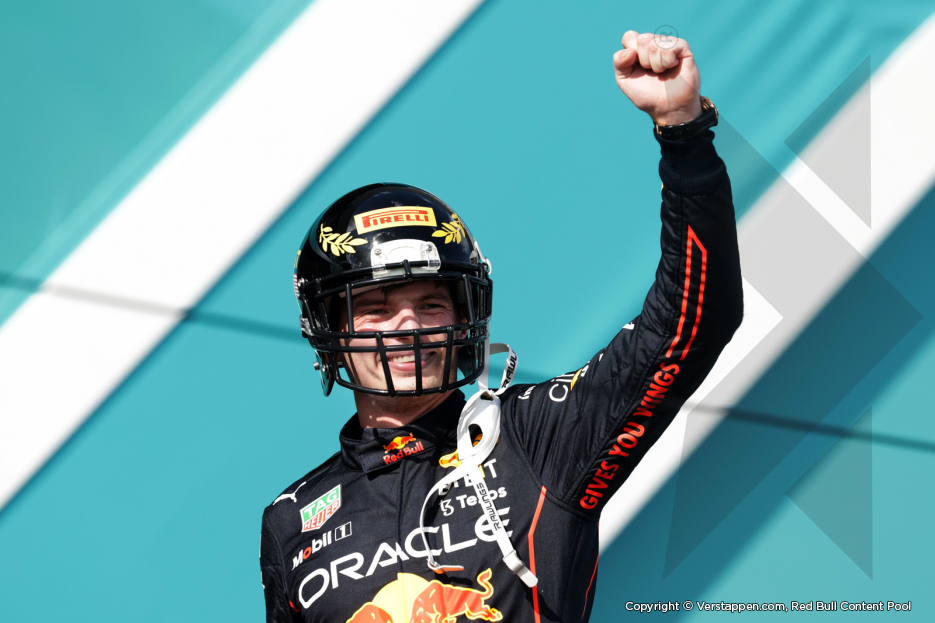 With an outside temperature of 32 degrees Celsius it is very warm ahead of the first Miami Grand Prix on the 5.412-meter-long Miami International Autodrome. All top ten cars start on the medium compound tyres, while both Aston Martins start from the pitlane as a fuel problem was detected in the cars of Lance Stroll and Sebastian Vettel.

Max has a good start from third on the grid. He brakes late and overtakes Carlos Sainz on the outside of turn one, putting himself in second position right behind Charles Leclerc who started from pole. Sergio Perez in is in P4, with Valtteri Bottas behind the Mexican in P5. The whole field gets through the first lap without incidents. Lewis Hamilton falls back from sixth to eighth position, but the Brit moves back up to sixth in the next six laps. Zhou Guanyu must park his Alfa Romeo in the pits with technical issues and is the first to retire form the race.

Verstappen can stay close to Leclerc, and in lap eight is Max within DRS range of the Ferrari driver. This gives Max the chance one lap later to overtake Leclerc on the inside of the first corner. In the following laps Verstappen increases the gap to Leclerc who is not able to keep up with the Dutchman. Perez in P4 suddenly suffers from a power loss in lap 20 and loses five seconds, but after getting instructions over the radio the Mexican seems to fix the issues of his RB18 and regains his pace.

Charles Leclerc is in lap 25 the first of the front runners to make his mandatory pitstop. Verstappen follows two laps later. After a faultless pitstop comes Max back out on track in second position with a new set of hard tyres on his Red Bull Racing RB18. One lap later Max regains the lead when Carlos Sainz goes in to make his pitstop. After the stops is Verstappen more than seven seconds ahead of Leclerc in P2. Sainz and Perez follow in P3 and P4. 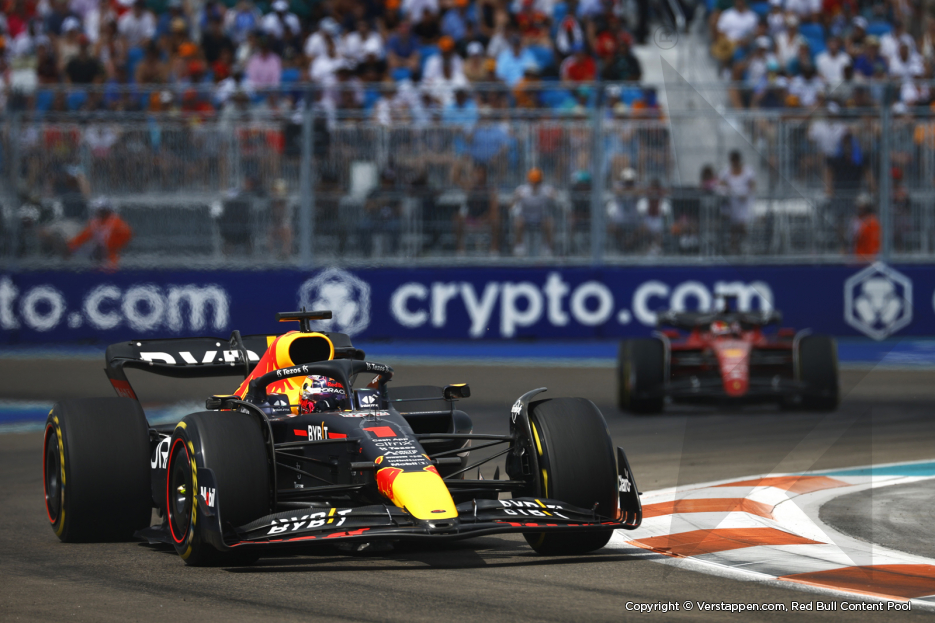 Fernando Alonso makes a daring move on Pierre Gasly in lap 39 for P9. The Spaniard touches the rear of Gasly in turn one, causing Gasly to lose his position to Alonso. It goes from bad to worse for Gasly when he goes wide in turn seven and when moving back on track hits the oncoming Lando Norris. The right rear tyre from Norris car comes of the rim and while spinning the McLaren driver comes to a stop, becoming the second driver to retire from the race.

Because of the stranded McLaren the Safety Car comes out on track. The big gap to Valtteri Bottas gives Perez an excellent opportunity to come into the pits for a new set of medium tyres, giving him an advantage against the Ferraris and Verstappen who are still on old hard tyres.

With ten laps to go the field is released. Max has a good restart and stays in the lead ahead of Leclerc, Sainz and Perez. Leclerc stays within one second of Verstappen which means the Monegasque gets DRS after two laps.

In lap 55 makes Mick Schumacher a move on the inside of Sebastian Vettel in turn one. The two Germans touch and Vettel spins, while Schumacher loses his front wing and again finishes outside the points. Verstappen in the lead can shake of Leclerc to win the race with a three second gap. Leclerc and Sainz finish in P2 and P3 while Perez finishes in fourth place. The Mercedes of George Russell and Lewis Hamilton finish in fifth and sixth, with behind them Valtteri Bottas in P7. Esteban Ocon, Alexander Albon and Lance Stroll complete the top ten.

Because Verstappen also sets the fastest lap, he scores this weekend again the maximum 26 points, narrowing the gap to championship leader Leclerc to nineteen points.