Published on 30 December 2022 by Mike Motilall 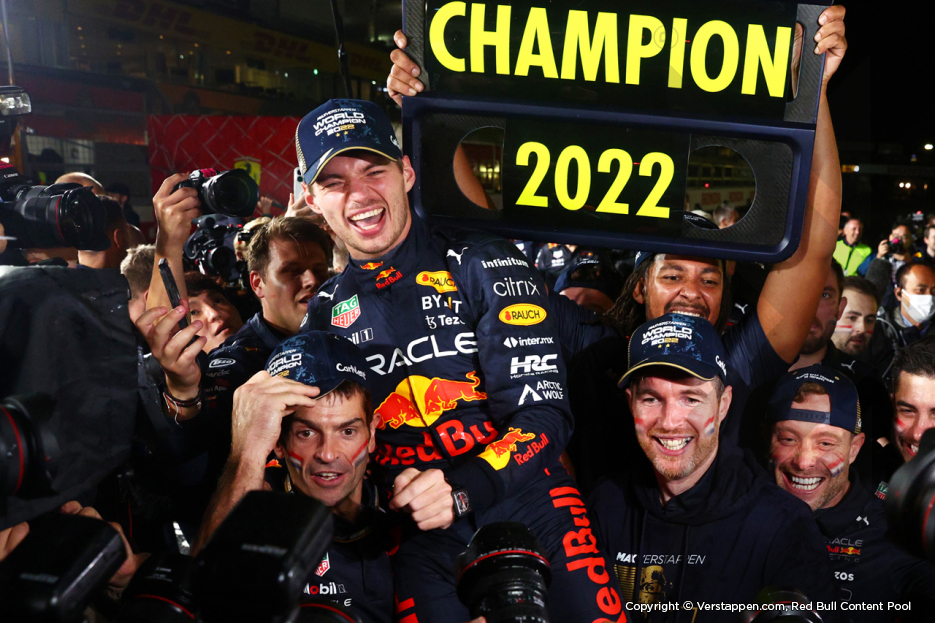 After Max Verstappen won his first Formula 1-title in 2021 in nothing short of a thrilling season, the Dutchman rose above himself to quite dominantly lay claim to his second world title in 2022. For Max 2022 was his most successful year in Formula 1 so far. Here we’ll have a look at Max’ most remarkable statistics of the championship.

Max Verstappen became world champion in 2022 by a large margin. After a confusing finish of the Japanese Grand Prix, Max was informed after the race that he had become champion. But also not after his rival Charles Leclerc had been given a time penalty and it was also announced that full points would be awarded. With still four races to go, this was the earliest championship won since Sebastian Vettel in 2011; there were also four races left to go then.

Max is the seventeenth driver with a minimum of two world titles and the eleventh driver who has won at least two titles in a row. Apart from that, Max won his two titles within ten months’ time. Only Jack Brabham was faster in winning two championships. The Australian celebrated in 1959 and 1960 both championships within eight months.

After the first three races the championship seemed very far away for Max. Having received two DNF’s within three races, the Dutchman was trailing championship leader Charles Leclerc by no less than 46 points. This was the largest points deficit ever by a driver who eventually still won the championship.

Max won in 2022 a record breaking 15 victories in one single year. With this he surpassed the old record of 13 wins in a single season from Sebastian Vettel (2013) and Michael Schumacher (2004). On the list of most Grand Prix-wins of all time, Max is ranked sixth with 35 wins to his name. Next on the list is Ayrton Senna with 41 Grand Prix-wins.

In 2022 Verstappen achieved his longest streak of consecutive wins in a row, five so far. Max achieved these five wins starting from five different positions on the grid. In France from P2 on the grid, in Hungary he started from tenth. In Belgium he started from P14 due to a grid penalty, in Zandvoort from pole and in Italy from seventh as a result of a grid penalty. It’s never happened before that a driver starting from five different positions has ever won five consecutive races. The last time a driver won a race starting from lower than the fourteenth position was in 2018 (Lewis Hamilton in the German Grand Prix). 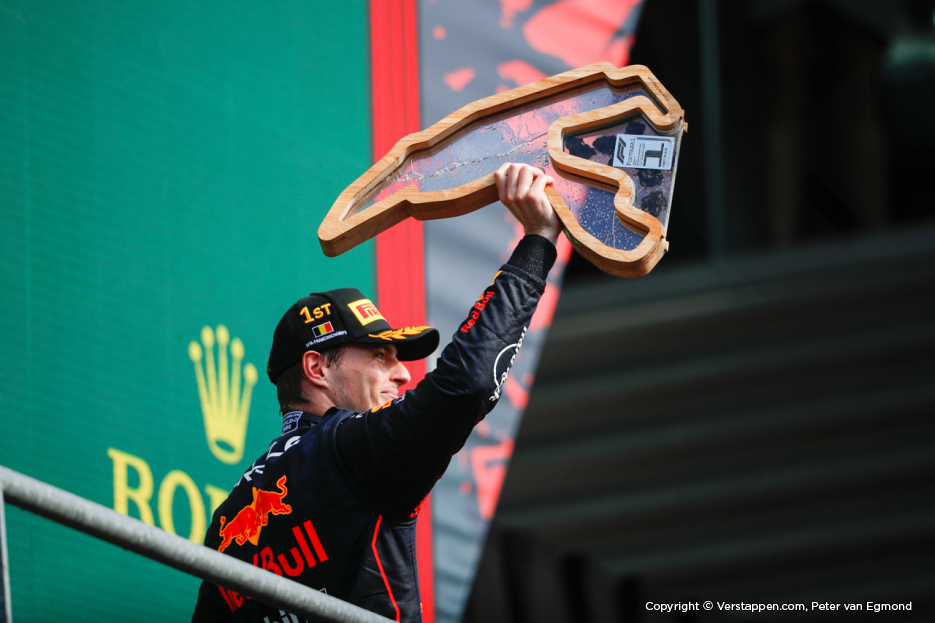 With two wins in the two home races that Max has so far driven in Zandvoort, he is so far the only driver in F1-history who has won all the home-Grands Prix he has competed in. Apart from that, Max has won two of the three sprint races this past year. Which means he has won three of the six sprint races ever held in F1-history.

Verstappen was no less than seventeen times on the podium in 2022, even though this was one podium less than he scored in 2021, which is still a Formula 1-record. With 77 podiums to his name, Max is ranked eighth on the all-time list and once again behind of Ayrton Senna (80 podiums). Especially during the last three years, Max has quite literally been building a track record as he has been winning podium after podium. With no less than 46 podium-finishes since the beginning of 2020, Verstappen has been in well over three quarter of the races, in the past three years, on the podium; the most of all the drivers.

Despite the fact that Lewis Hamilton was not able to pose any threat to Max in the championship this year, both gentlemen ended up four times in a one-two after the race; every time Max as the winner and Lewis second fastest. This means that Verstappen and Hamilton have shared the two top-steps of the podium 33 times together already in the entire F1-history. With that they have broken the record of 31 one-two’s from Hamilton and Nico Rosberg.

Max scored 454 world championship points this year, surpassing Lewis Hamilton’s record of the most points in one season. The Briton scored in 2019 no less than 413 points; however, in that year one race less was driven compared to 2022 and there were also no sprint races. After his win in the final race in Abu Dhabi, Verstappen passed the 2000-world championship points mark. With a total of 2011,5 points, Verstappen is now fourth in the all-time rankings list, right behind of Fernando Alonso.

Verstappen started seven times from pole this year while Charles Leclerc has achieved two poles more this season. The counter is now on 20 poles in total for Max, putting him fourteenth on the all-time list, together with Damon Hill and Valtteri Bottas. Also, Max drove this season five times the fastest lap, putting his total now on 21 fastest laps. Good enough for a shared thirteenth spot with Gerhard Berger on the all-time ranking list. 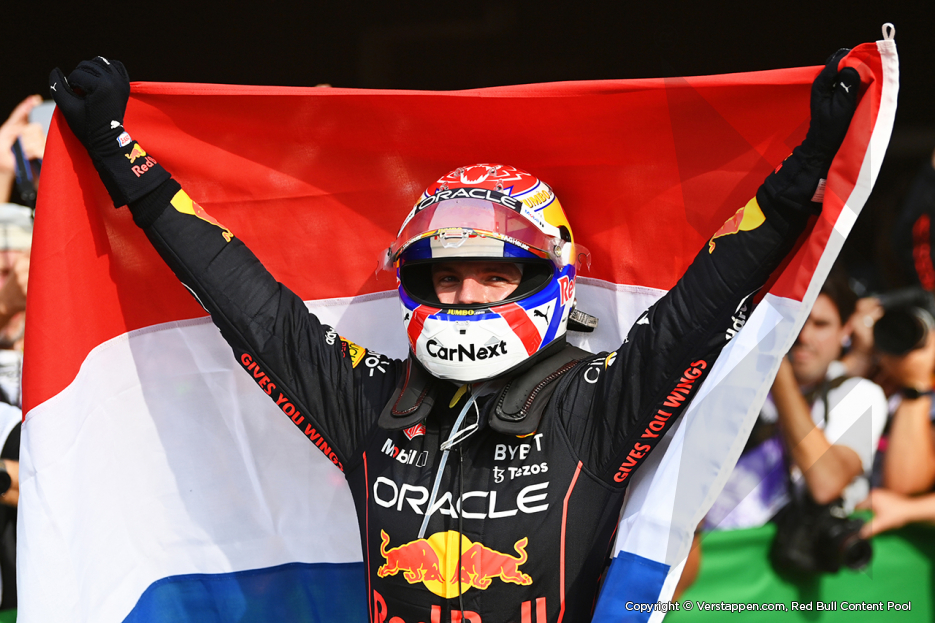 Max lead a total of 616 laps, almost twice as much as his closest competitor Charles Leclerc with only 311 laps to his name. With that, Max also completed the most laps of all the drivers this season. With no less than 1271 laps, Max drove 98.22% of the possible amount of laps to be driven.

Also for the Red Bull Racing team 2022 was an exceptionally successful year. The RB18 was the most successful car in the history of the Milton Keynes based squad with a whopping 17 wins (fifteen for Verstappen and two for Sergio Perez). For the first time since 2013, the Constructors’ title has once again returned to Red Bull Racing; their fifth in total now.

In Imola Max Verstappen and Sergio Perez scored their first one-two for Red Bull Racing since the 2016 Malaysian Grand Prix, when Daniel Ricciardo won and Verstappen came in second. The Red Bull-drivers took home a total of five one-two’s this season. Which means that in the history of the team, in one single season, the most one-two’s were scored.

Red Bull Racing now has a total of 91 victories in the books, which means they have surpassed Lotus’ fifth spot on the all-time ranking’s list. Max has now driven 140 Grands Prix for Red Bull Racing, which means he is the driver with the highest amount of Grand Prix-starts for the team. He is with 77 podiums also the driver with the highest amount of podiums for Red Bull. Regarding wins, he is only second best to Sebastian Vettel. The German was victorious 38 times for the Milton Keynes based squad.

Finally, Nyck de Vries made his Formula 1-debut during the Italian Grand Prix. The Frisian-driver replaced Alexander Albon at Williams who was out due to appendicitis. This meant that for the first time since the 2006 Brazilian Grand Prix, two Dutchmen together started in a Formula 1-race. By chance, both Max and Nyck started from the fourth row. As Max managed to win the race without any issues, Nyck managed to secure two championship-points by finishing in P9. For the first time ever in the history of Formula 1, two Dutchmen finished in the points during the same race. The coming year de Vries has managed to secure a seat at AlphaTauri and for the first time since 1962, two Dutchmen will be partaking in the Dutch Grand Prix at Zandvoort.