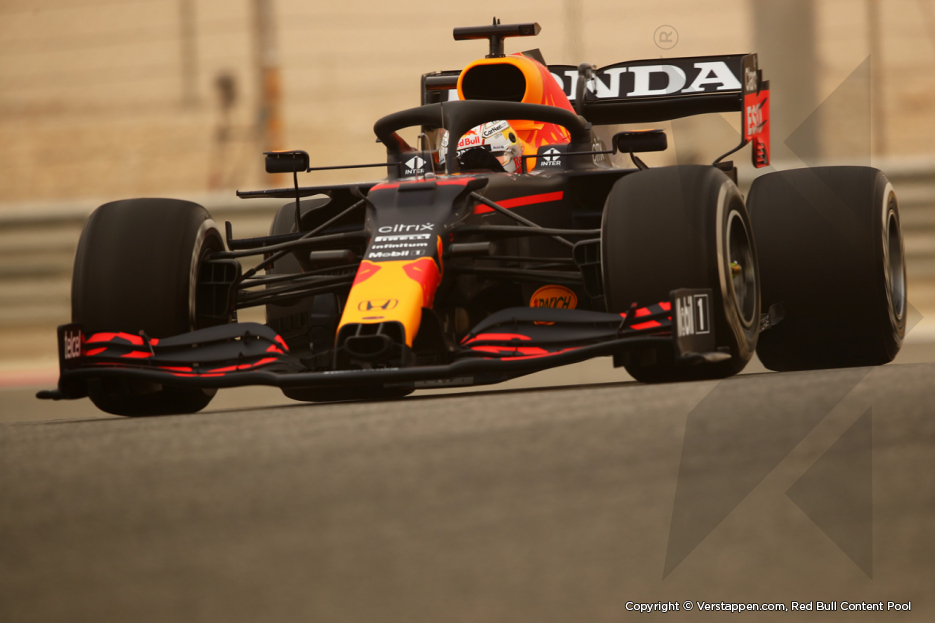 Max Verstappen enjoyed a successful start to the only pre-season test of the 2021 Formula 1 season. The Red Bull Racing driver was quickest around the Bahrain International Circuit and completed a productive 138 laps. Lando Norris (McLaren) and Esteban Ocon (Alpine) completed the top three, followed by Lance Stroll’s Aston Martin and Carlos Sainz in his Ferrari.

“We had a very positive day”, said Max after the first of three days of testing. “We were able to complete a lot of laps, even though the track conditions weren’t always that great. It was very warm, with a lot of wind and a lot of tyre degradation. So it’s not easy to complete so many laps after another so I’m very happy with today. We don’t have to worry about the pace yet, we’ve just focussed on our program. The car felt good and it’s good to start a test this way.”

The Dutchman added: “Driving in this heat is usually a bit more challenging but because of the dust I only changed my visor. You always hope for a day like today, so the finish it off like today, means we’re all very happy. In terms of pace, we’ll wait to Q3 of the first Grand Prix. That’s when you see the true performance of all the cars.” 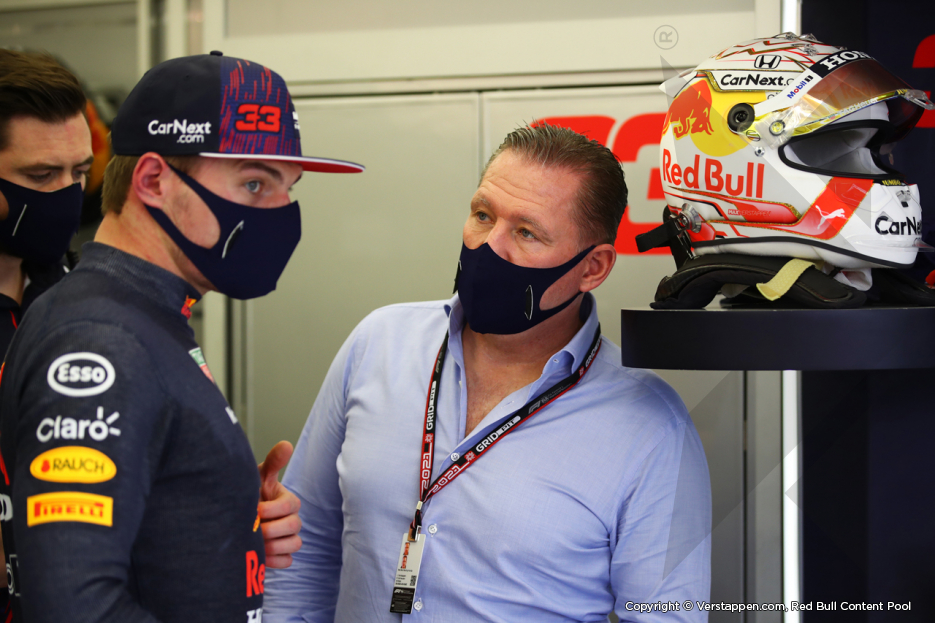 Ahead of the afternoon session, a few driver swaps have taken place. Lando Norris took over driving duties from Daniel Ricciardo at McLaren, whilst Lance Stroll swapped with Sebastian Vettel (Aston Martin), Carlos Sainz drove the Ferrari instead of Charles Leclerc, Antonio Giovinazzi replaced Kimi Raikkonen at Alfa Romeo, Mick Schumacher made way for Nikita Mazepin at Haas and reigning champion Lewis Hamilton handled the wheel of the Mercedes as opposed to Valtteri Bottas.

At the start of the afternoon session, the circuit is enveloped in a sandstorm, meaning the teams are holding back to hit the track. Ten minutes in, the action finally gets underway with Esteban Ocon leaving his garage in the new Alpine.

From the 45-minute mark, it is getting busy on track with most teams now committed to running their new cars despite the sand on the circuit. The result is ever dropping lap times as the session progresses. Max, on a set of the C2 Pirellis, the only compound Red Bull have used thus far in the test, sets his quickest lap of the session up until then, and tops the leader boards by a comfortable margin to Ricciardo’s fastest effort of the morning session. 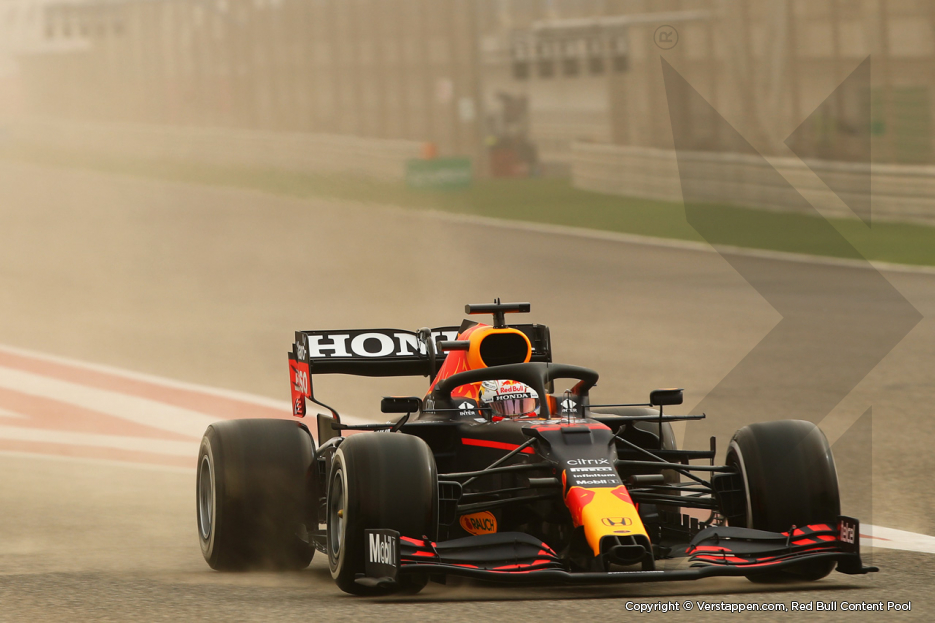 With an hour and a half to go, the flood lights around the track are switched on as the sun sets.

Ocon is the first driver of the day who tries a lap on the soft Pirelli compound. Using the extra grip, the Frenchman improves his lap time, but him and his Alpine remain two tenths adrift from Max.

With 60 minutes remaining, Max heads out on a set of medium C3 tyres. After three purple sectors, he sets the quickest lap of the day (1.30.674), extending his gap to Ocon to almost a second.

The Frenchman improves his lap time again (1.31.4) but will ultimately be the third quickest driver of the day as Lando Norris pips him to second in the closing stages in his McLaren. 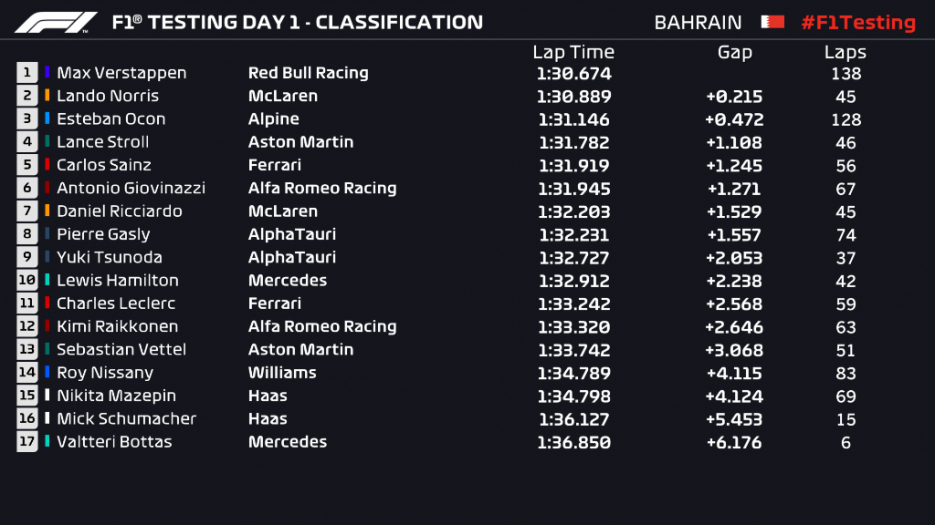