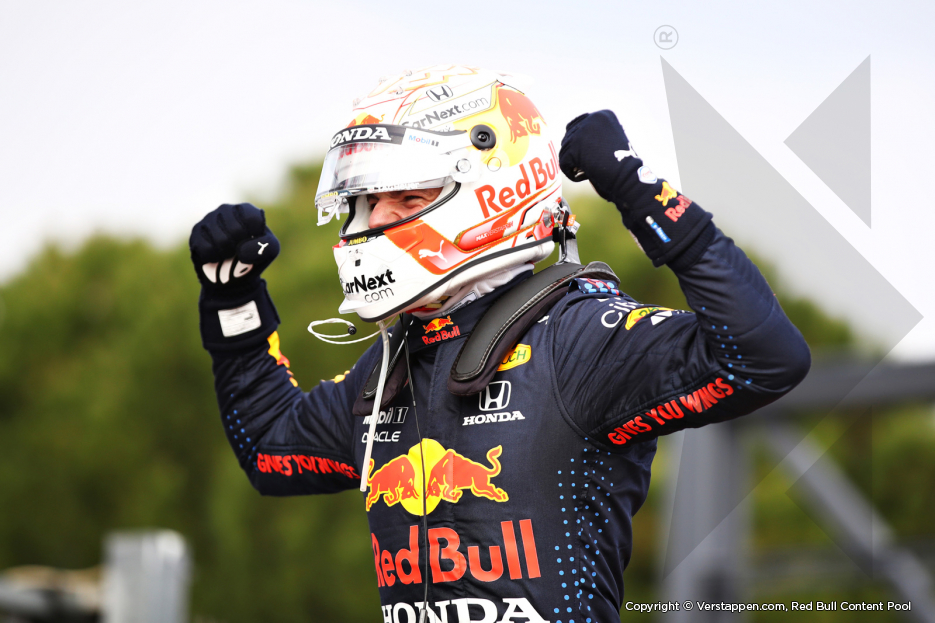 Max Verstappen quite magnificently took the victory home of the Emilia-Romagna Grand Prix. The start of the thrilling race took place on a wet track. Max got well off the line from third and took the lead from Lewis Hamilton at Turn two. The race was halted due to a severe crash between Valtteri Bottas and George Russell, but even after the restart the victory was never a question for Max. He was able to pull a 22-second gap towards Hamilton and subsequently took the win home. Hamilton went off track halfway the race and damaged his front wing, but after the re-start he managed to fight his way back all to second place. Lando Norris rounded out the podium for McLaren by finishing third fastest.

After the race a very delighted Max said the following: “It was a great race and I am very happy with the victory. The key was the great start, I was also surprised by it. Last year we were having some issues with the starts but the team has worked hard to make that better. You already saw that in Bahrain, but under these tricky conditions we really did a great job.”

The conditions at the beginning of the race were tricky according to Max: “It was very challenging out there especially in the beginning. It was very hard to stay on track to be honest, it was very slippery. And then of course with the tyres degrading in the wet. And choose the right moment to go onto slicks is never easy. You never want to be the first to change to slicks on a difficult track with just only one dry line. I think that we made the call to go for slicks on the right lap. One lap earlier and it would have been more difficult.”

After the re-start, Max almost spun out at the penultimate corner, but he managed to keep his car under control and on track. “I had a little moment in my restart.  It was a secret maneuver to warm up the tyres”, the Dutchman jokingly shares. “Luckily we got away with it but this goes to show how tricky it is on cold tyres. Be a little too aggressive on the throttle and you’re off the track. Apart from that everything went well today.”

Regarding the question whether it was a dominant win or not, Max answers: “I don’t think we were dominant. Lewis was able to keep up with me and that he was able to fight back from ninth all the way to second, this shows that they still have enough speed. Today we did everything right in these conditions. We had a good start, a good strategy and kept our nose clean, that’s how you win a race. But, there are no guarantees and we still need to work hard to keep improving ourselves. The differences are minimal, but for now I am especially happy with this result and the good start of the season.” 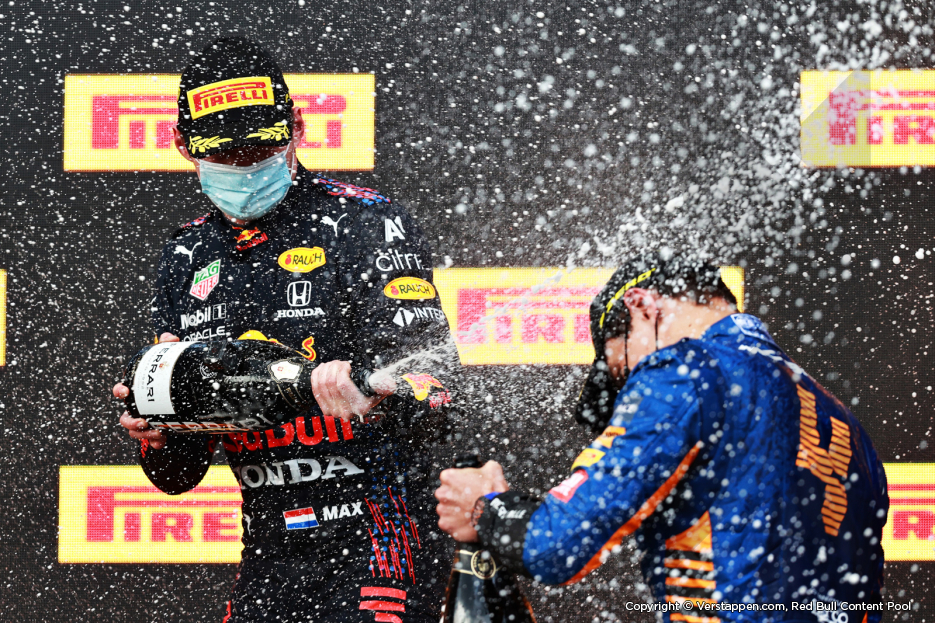 Prior to the race the Heavens open up and the Imola circuit gets soaking wet, especially the first part of the track. Fernando Alonso, on his way to the grid, spins out at Tosa and damages the front wing of his Alpine. The Spaniard is able to head back to the pits and have his wing replaced. The Aston Martin drivers also have their share of misfortune. Lance Stroll’s rear right-brake on his Aston Martin catches fire and his mechanics barely manage to fix the car on time for the start. Team mate Sebastian Vettel is forced to start from the pits due to some technical issue. Almost all the drivers head out on the intermediates, except Pierre Gasly, Esteban Ocon, Mick Schumacher and Nikita Mazipin who all start on the full wets.

Max gets well off the line from third and is side-by-side with Lewis Hamilton, who started from pole, into the second corner. Max takes over the lead while Hamilton runs wide on the kerbs. At the back of the pack Nicholas Latifi and Nikita Mazepin hit each other between Turns thirteen and fourteen. Latifi hits the wall on the right pretty hard but the Canadian walks away unhurt from his Williams. The incident triggers the Safety Car. At that moment Max is leading the pack, followed by Hamilton, Charles Leclerc, Sergio Perez and Daniel Ricciardo.

On lap four and under Safety Car conditions, Mick Schumacher hits the wall on the straight at start-finish while he was busy warming up his tyres. The German is able to continue on but because the pit lane was briefly closed, he is forced to do two more laps before being able to have his front wing replaced on his Haas. Sergio Perez briefly went off track during the Safety Car and re-takes his lost positions, the Mexican is later penalized for this with a 10-second time-penalty. 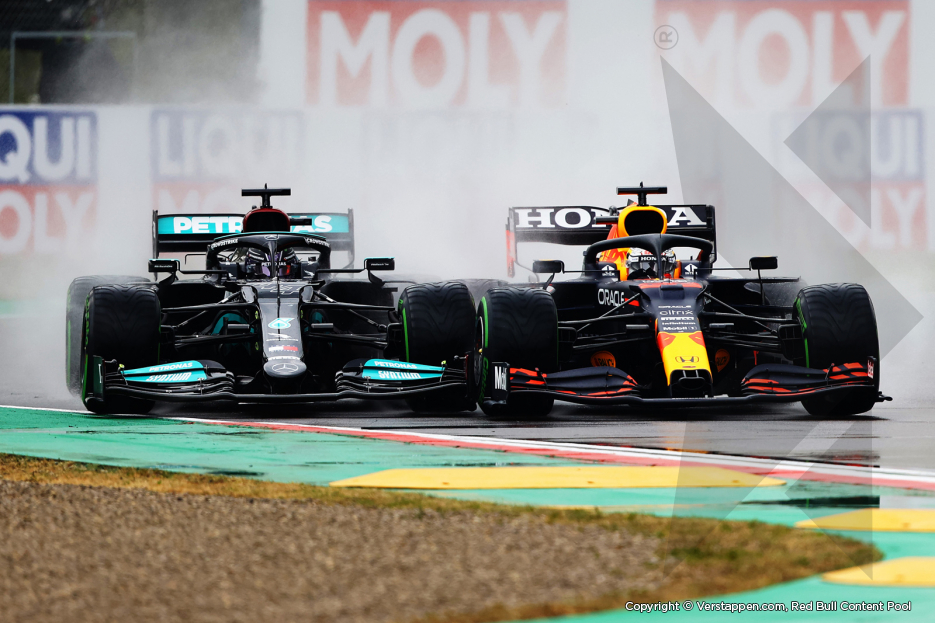 On lap seven the pack is let loose again. Despite the fact that Hamilton is able to get next to Verstappen, the Dutchman retains his lead entering the second corner. The track is too dry for full wets and Gasly drops way back because of this before he decides to head back in for intermediates. The track starts to dry up and Vettel is the first driver who is brave enough to switch to slicks. The unfortunate German gets, shortly after that, a stop-and-go penalty. Prior to the race his tyres hadn’t been mounted on his Aston Martin on time.

Hamilton is gradually gaining on Verstappen, but before they tangle Verstappen heads in to the pits for slicks on lap 28. Verstappen rejoins in third on the medium compound tyre. Because Hamilton and Leclerc also head in to the pits one lap later for slicks as well, Max re-takes the lead.

On lap 31, Hamilton locks up his front and beaches his Mercedes at Tosa when trying to overtake some backmarkers. The Briton hits the tyre wall with his front wing and it takes an eternity before he is able to back up out of the gravel trap and is able to continue on. While Hamilton is heading to the pits to have his front wing replaced a major crash happens between Valtteri Bottas and George Russell on the straight. Russell tries to overtake Bottas with DRS but gets on the grass during his attempt and hits Bottas. Both drivers spin out uncontrollably into the tyre walls. Despite the severe damage to both cars, both Bottas and Russell walk away unscathed. First the Safety Car is deployed but then it is decided to red flag the race. 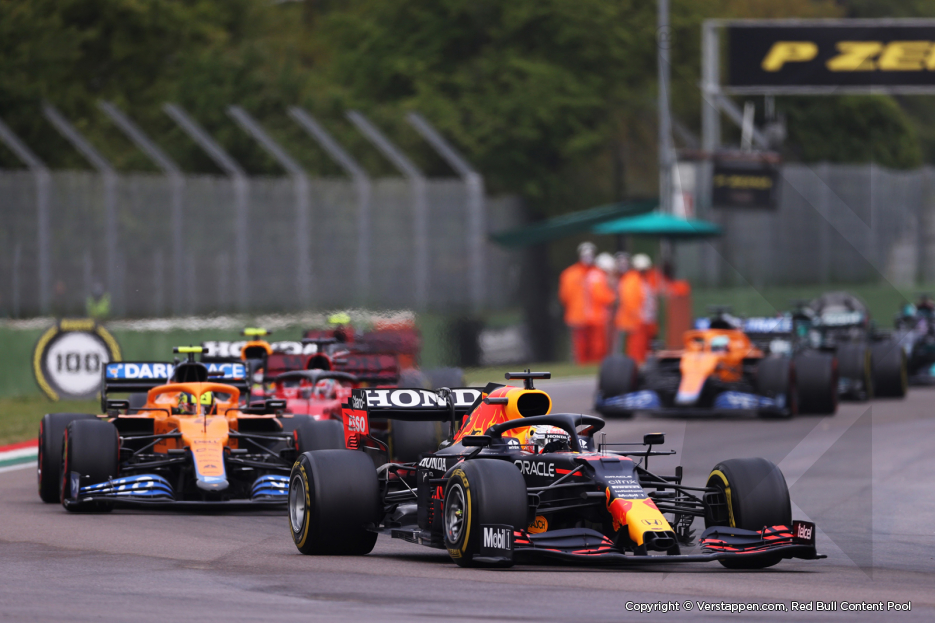 After almost half an hour, the race is resumed. Race Control decides that there should be a rolling start. Max almost spins out at the penultimate corner but he is able to keep his RB16B on track and despite the treacherous moment, the Red Bull-driver retains the lead after the re-start. Lando Norris passes Leclerc to take second place on his softs. Yuki Tsunoda spins out at Turn three but manages to continue on.

On lap 38 Perez spins out at the Villeneuve chicane. The Mexican is able to get out of the gravel trap on his own, but has dropped all the way back to fourteen. Meanwhile Hamilton has moved up to P6. A few laps later, the Mercedes-driver overtakes Ricciardo for fifth place. Hamilton continues his push forward by overtaking Sainz on lap 50 for fourth place. The Briton makes little work of Charles Leclerc on lap 55. And even Lando Norris is forced to bow his head for Hamilton on lap 60. The Briton has now worked himself all the way back up to second place.

At the front it’s plain sailing for Max and with a 22-second lead on Hamilton he most convincingly takes the victory home. Lando Norris comes in third fastest and takes his second F1-career podium. Ferrari running Charles Leclerc and Carlos Sainz are fourth and fifth in their home race. Daniel Ricciardo finishes in sixth place while Lance Stroll, Pierre Gasly, Kimi Raikkonen and Esteban Ocon round out the top ten.