Max Verstappen wins French GP: 'Had to work hard for it' 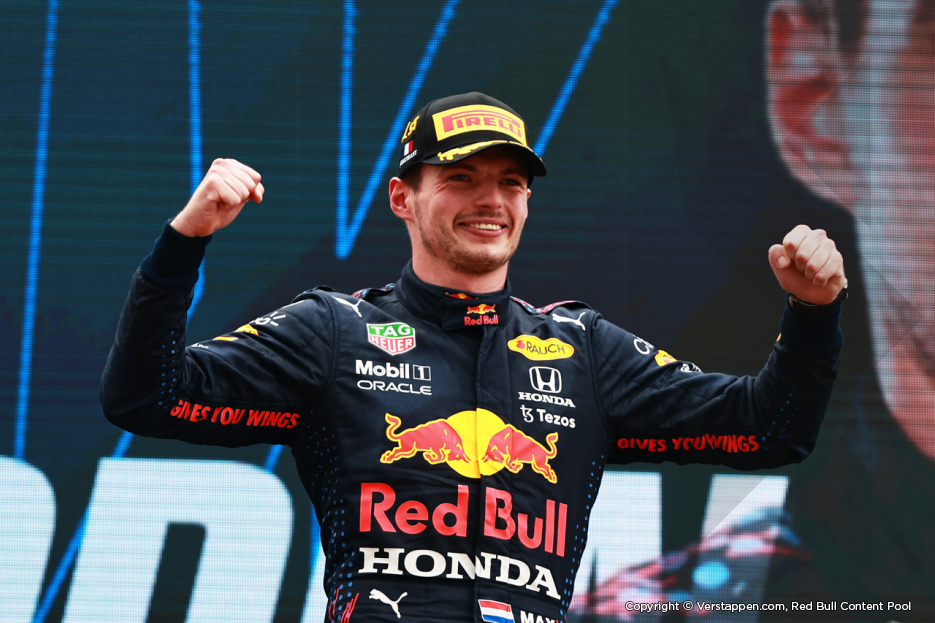 Max Verstappen spectacularly won the French Grand Prix. The Dutchman, starting from pole, lost the lead to Lewis Hamilton after turning into the first corner, but fought back during the first pitstops and regained the lead. Then Verstappen was the only one in the top four to make a second pitstop and was able to overtake teammate Sergio Pérez and both Mercedes – of which Lewis Hamilton in the penultimate lap – to take his thirteenth victory of his Formula 1 career. Pérez completed the party for Red Bull Racing by overtaking Valtteri Bottas and to finish on the podium.

“It was super difficult out there with the wind”, says a happy Verstappen after the race. “One lap the balance was okay, and the next the car was sliding everywhere. It was really difficult to keep the car stable. After the first pitstop Mercedes on the hard tyre were pushing me hard, so we made the call to do a two stop. Luckily at the end that paid off, but we had to work hard for it.”

Max takes us back to the first lap of the race. He explains what exactly went wrong: “I braked just as normal, but suddenly lost the rear. I tried to correct, but the car just kept going. The rest of the stint I did not have much grip.”

After the first pitstop the Red Bull Racing driver finds himself in front of the Mercedes of Lewis Hamilton, contrary to expectations: “I do not think anyone expected the undercut to make such a massive difference. I saw Lewis coming out of the pits, and used a bit of extra battery to get in front of him. That was great, but after that it was hard to keep the Mercedes behind. When the wind became less I was able to pull away a bit as things felt a bit more normal.”

In the final phase it looked like the gap to Lewis Hamilton was perhaps to big, but that was not the case. “There were quite a few backmarkers between me and Lewis, but luckily they all did well, and we could have a good fight to the end. It was tense, but in the end it worked out well.” The Dutchman also increases his lead on Hamilton in the championship with eight points. Max is very positive on what is coming: “We were the whole race in the fight, I am sure that will continue during the rest of the season.”

It is just after three in the afternoon when the lights on the circuit in Le Castellet go out for the seventh race of the season. Max Verstappen has a good start and seems to stay ahead of Lewis Hamilton when turning into the first corner, but the Red Bull Racing driver goes of the track, losing the lead to the Brit. Verstappen joins in second position with Valtteri Bottas, Sergio Pérez, Carlos Sainz and Pierre Gasly behind him forming the top six after the first lap.

After five laps the gap between Max and race leader Hamilton is one and a half seconds. But the Dutchman does not have much breathing space, with Valtteri Bottas only a second behind the RB16B of Verstappen. Teammate Sergio Pérez follows in fourth position over three seconds behind.

The first drivers make their pitstops from lap fifteen. Valtteri Bottas changes his tyres three laps later and comes out back on track in fourth position. Max Verstappen makes his pitstop one lap later. The Dutchman comes out in front of Bottas after a pretty impressive job of his pit crew. He even overtakes Lewis Hamilton, who changes his tyres one lap later than Max and just comes short to keep the lead. But with the top three so close together the pressure is fully on the Red Bull Racing driver.

Half way the race the top six is formed by Max Verstappen, Lewis Hamilton, Valtteri Bottas, Sergio Pérez, Sebastian Vettel and Lance Stroll, but both Aston Martins still need to make their pitstops. Hamilton keeps the gap to Verstappen within a second, and also Bottas stays very close to his teammate. Max reports over the radio that he cannot keep up this pace till the end of the race. 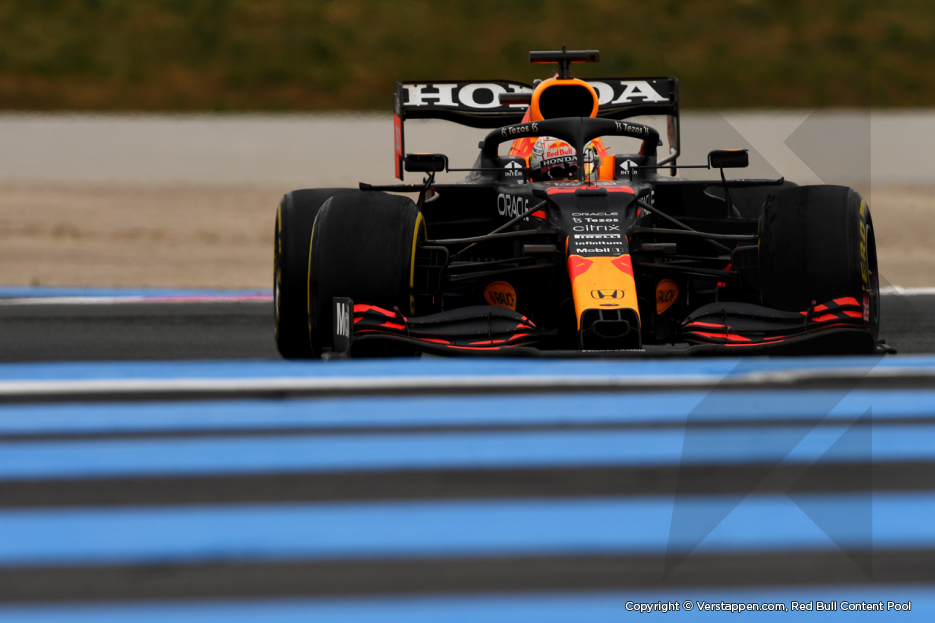 At the end of lap thirty-two we see Verstappen entering the pitlane for a new set of medium tyres, he comes back out in fourth position. From third position, Sergio Pérez seems to go for a one stop, as are both Mercedes, who stay out on track.

In the following period Max is closing in on the black cars. With ten laps to go the gap to Valtteri Bottas is only a second. When exiting turn nine Verstappen places his car next to the Mercedes and overtakes Bottas for second position.

Then Max turns his attention to race leader Lewis Hamilton. The gap gets smaller every lap, and Verstappen gets within DRS range of the Brit in the penultimate lap. Max overtakes seven times world champion on the straight after turn seven, and wins the race. He also takes the extra point for fastest lap and can add twenty six points to his total, increasing the lead for the championship to twelve points. Sergio Pérez can overtake Valtteri Bottas and finishes in third position. The Mercedes driver completes together with Lando Norris in P4 and Daniel Ricciardo in P5 the top six.