Published on 05 September 2021 by Kees-Jan Koster

Max Verstappen won the Dutch Grand Prix at Zandvoort. The Red Bull Racing driver had a good start from pole and stayed in front of Lewis Hamilton the whole race. Mercedes made multiple strategic calls to try and win, but Max countered them all and won in front of thousands of fans and retook the lead in the championship. Lewis Hamilton and Valtteri Bottas completed the podium.

“It is amazing to win here”, says a happy Verstappen to the cheers of the Orange Army. “The expectations were very high going into the weekend, and that is never easy to fulfill. I am so happy to win here and take the lead in the championship as well. It is just amazing, with this crowd. Incredible.”

Max takes us back to the start of the race: “The start was very important, we did that well. Mercedes tried to make it very difficult for us, but we countered them really well. We can be very pleased with the whole team performance today.”

Looking ahead to the Italian Grand Prix, the Red Bull Racing driver says: “It has not been our best circuit, but we are overall more competitive this year. Everything has to be right for us to compete at the front.” The same is true for the other races this year, according to Verstappen: “We have many different circuits to go, the penny can drop either way. We have to keep pushing and continue to improve the car.”

It is just after three when the five red lights go off and the first Dutch Grand Prix for thirty-six year gets underway. Max Verstappen has a good start and stays in the lead when entering the Tarzan corner in front of championship leader Lewis Hamilton. At the end of the first lap – which surprisingly all drivers get through unharmed – Max has increased the gap to the Mercedes of Lewis Hamilton already to almost two seconds.

At the end of lap twenty goes Lewis Hamilton into the pits, the first of the top three, his pitstop is not flawless and he loses some time. A lap later it is Max Verstappen’s turn. The Red Bull Racing driver comes out on track in second position, but the gap to Lewis Hamilton is now only two seconds.

Valtteri Bottas continues and it looks like he is going for a one-stop race, but the pace of the Finn plummets as the laps go by. Max can close the gap quickly and is within a couple of laps in striking distance of the Mercedes. Verstappen is close enough at the end of lap thirty and overtakes the Finnish driver with DRS on the straight. Bottas does not get in the way of teammate Lewis Hamilton and lets the Brit overtake easily. 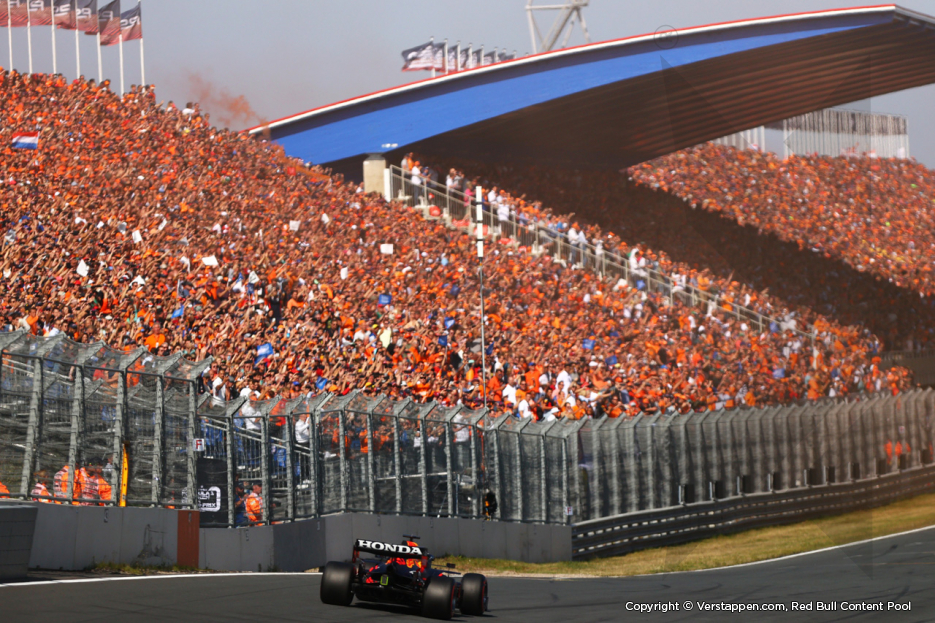 Lewis Hamilton goes into the pits for a second time in lap thirty-nine. The seven-time world champion changes to the medium tyres, this time a used set. Max comes into the pits a lap later as Red Bull reacts, and changes to a new set of the hard tyre. He comes back out on track three seconds ahead, and even increases the gap in the following laps. With only a third of the race to go the gap is four seconds.

Lewis Hamilton does not admit defeat and pushes hard in the final phase of the race to try and close the gap to Verstappen. It does not work for the Mercedes driver and he decides to go for another pitstop like his teammate Valtteri Bottas and changes to soft tyres. In the end Hamilton takes the point for fastest lap, but the big winner of the day is Max Verstappen, who takes his seventh win of the season in front of an ecstatic crowd.

Lewis Hamilton en Valtteri Bottas complete the podium, taking P2 and P3 respectively. Pierre Gasly, Charles Leclerc and Fernando Alonso form the rest of the top six. Sergio Pérez, who had a difficult weekend, finishes in eight position after a good catch-up race. Nikita Mazepin and Yuki Tsunoda did not finish the race after technical issues.