Max Verstappen second fastest in Qatar Grand Prix: 'I never give up'

Published on 21 November 2021 by Mike Motilall 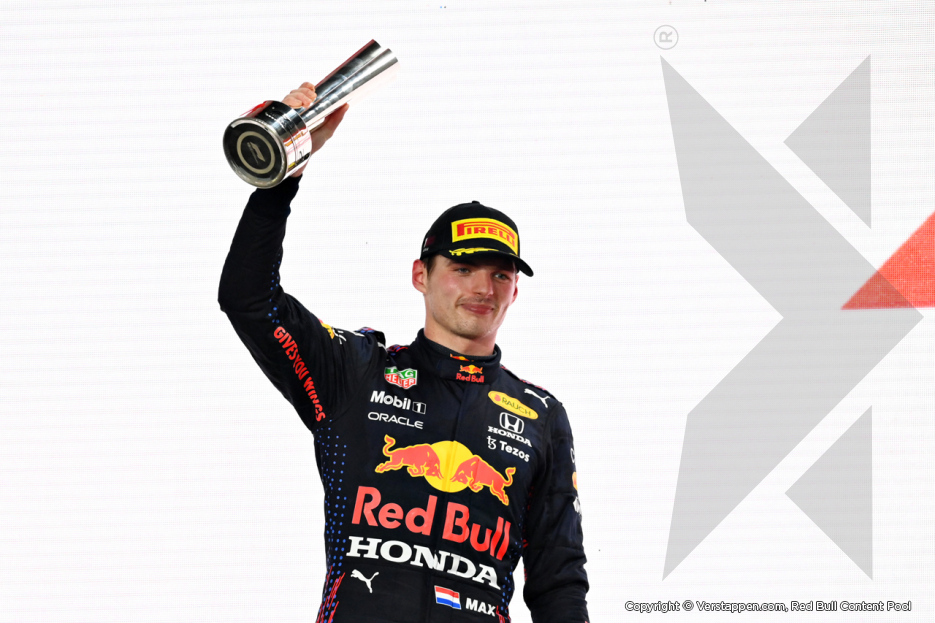 Max Verstappen finished second fastest at the Qatar Grand Prix. The Dutch ace was given a five-place grid-penalty before the race, resulting in him having to start from seventh place. Max got well off the line after which he was already running in fourth after the first corner. A few laps later, Verstappen managed to move up all the way to second place, but he fell short in being a viable threat to Lewis Hamilton. Hamilton took the win home quite commandingly. Verstappen came in second and also took the extra point for the fastest lap but saw his lead in the standings drop to just eight points. Fernando Alonso surprisingly finished third fastest and scored his first podium since the 2014 Hungarian Grand Prix.

After the race, Max had the following to say: “Our starting position was a bit compromised. Because of the penalty I was of course motivated, but they will never get the best of me. The first lap was very important and luckily I had a really good start. Then we were quite quickly back into second but you could obviously see we were lacking pace. I tried to keep the gap to Hamilton small so they were not in a position to do an extra stop. That worked out well and I am happy to eventually take the point for the fastest laptime.”

The Losail circuit, where their first ever Formula 1-race was driven today, had Verstappen’s seal of approval: “This track is a lot of fun to drive, it’s really quick. And degradation wise the tyres were holding up pretty well. It was cool. I knew it was going to be difficult to the end. Especially the final laps, when I was going for the fastest lap, did have an impact, but I think that’s nice and keeps it exciting.”

The championship will be decided after the final two races and Max is brimming with a fighting spirit: “The entire race we were still too slow. But, I never give up and we are not planning on doing that till the end of the season, then we’ll see where we stand. So far we are still leading the standings and hopefully we can keep that. It’s going to be a tight battle to the end and we’re going to give it our all.” 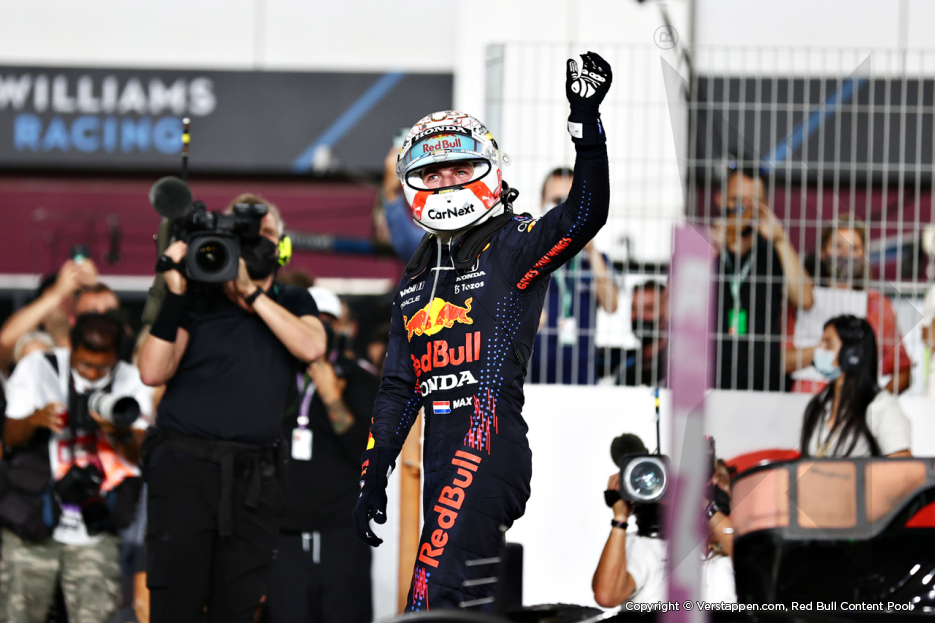 An hour and a half before the race it is announced that Max has been given a five-place grid-penalty. According to Race Control he did not slow down sufficiently during double yellow flags on his final flying lap during qualifying. This means the Dutchman will start the race from P7 on the Losail International Circuit. Verstappen gets well off the line from seventh, he finds the inside of Turn one and exits the corner fourth fastest. Pole sitter Hamilton manages to keep the lead, followed by Fernando Alonso and Pierre Gasly. All the drivers get through the first lap without a hitch. Verstappen is already showing his intent to the drivers in front of him and on lap four, with the aid of his DRS, he overtakes Pierre Gasly at Turn one. Verstappen makes little work of Fernando Alonso one lap later, putting him second, some four seconds a stray from race leader Hamilton.

Sergio Perez, who started from eleventh after a disappointing qualifying, fights his way through the pack and on lap sixteen he overtakes Gasly for fifth. Valtteri Bottas started from sixth due to a three-place grid penalty, but the Finn has a poor start and only on lap seventeen is he able to move back up the pack to sixth.

Verstappen does his first stop on lap eighteen. After a flawless 2,2 seconds pit stop, Max rejoins just in front of Alonso in second on a fresh set of the hard compound tyres on his RB16B. Hamilton stops one lap later and emerges on track, leading the race well ahead of Verstappen. Bottas is by then third fastest and decides to keep on going. Bottas wears his medium compound tyre to the bone and the Finn suffers a left front puncture on lap 34. With a shower of sparks coming from the back of his Mercedes, Bottas heads back to the pits for new tyres and to have his front wing changed as he rejoins in fourteenth. At that point, Verstappen is eight seconds behind of race leader Hamilton. 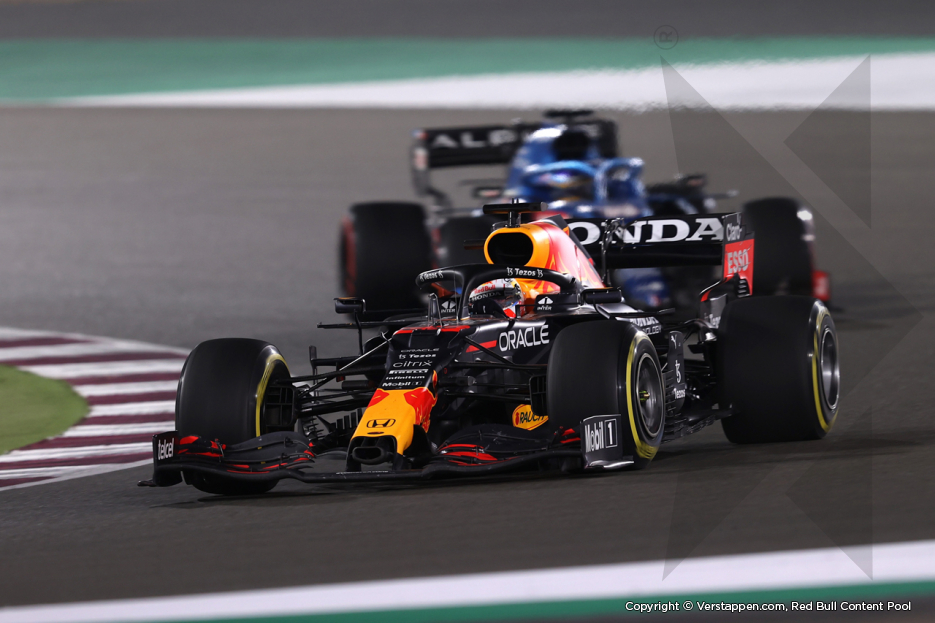 Verstappen does his second stop on lap 42. In a once again very fast 2,1 seconds stop from Red Bull Racing, they swap Max’ tyres for a new set of the mediums as he retains his second place after rejoining. Hamilton and Perez follow suit one lap later. Hamilton rejoins with well over an eight second lead on Max, while Perez drops back from third to seventh. On his fresh tyres Perez quickly moves up to fourth fastest, behind of Alonso.

On lap 51 Bottas heads to the pits. He parks his Mercedes in the garage and is the first one to retire from the race. At the same time, both Williams-drivers George Russell and Nicholas Latifi suffer a left front puncture. Russel is able to limp back to the pits to have his tyres changed, while team mate Latifi is less fortunate and has to park his car trackside.

As Latifi’s Williams has to be recovered from the track, there is a brief Virtual Safety Car-period. Max greedily uses this situation to do his third stop in an effort to secure the fastest lap on a set of the softs. While Hamilton commandingly takes the win home, Max clocks the fastest lap time on the final lap. Securing the additional point apart from the eighteen points for second place. With this Max still has an eight points lead on his title rival Hamilton in the standings, with still two races to go. Alonso finishes third fastest and scores his first podium since his return to Formula 1.

Sergio Perez falls short for the podium and comes in fourth fastest. Esteban Ocon gives Alpine another reason to celebrate by finishing fifth. Lance Stroll takes the flag in sixth, his best result this season. Behind him the Ferraris of Carlos Sainz and Charles Leclerc are P7 and P8, while Lando Norris and Sebastian Vettel round out the top ten.