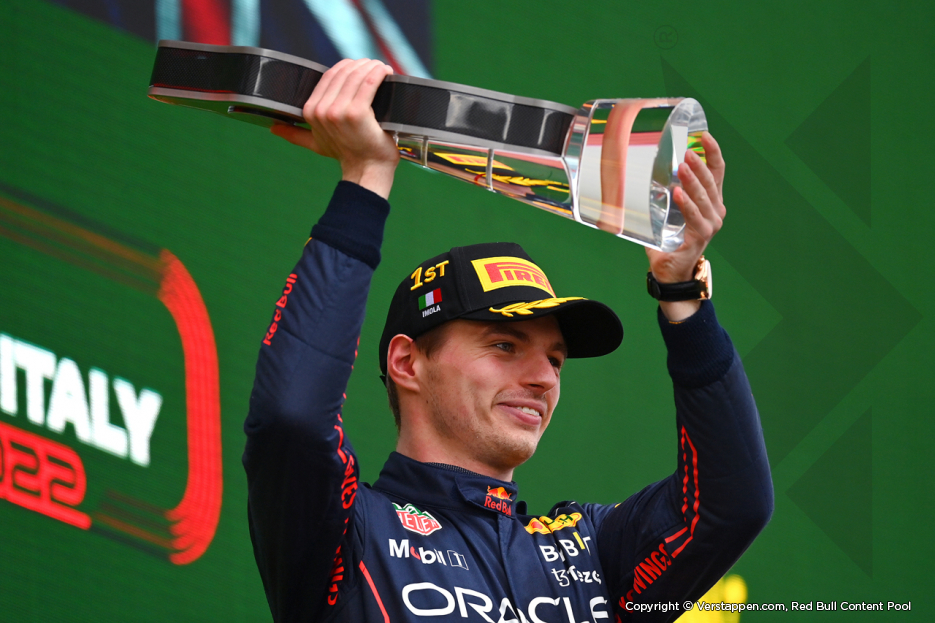 Max Verstappen convincingly won the Emilia-Romagna Grand Prix. He took the maximum points available by finishing first and setting the fastest lap. He had a good start from pole position and finished eventually more than sixteen seconds ahead of teammate Sergio Perez. With that Oracle Red Bull Racing took the first one-two of the season on the wet but drying track in Imola. McLaren driver Lando Norris took the third place on the podium. George Russell and Valtteri Bottas completed the top five. It was not a good Sunday for the tifosi, Carlos Sainz had to retire after getting stuck in the gravel after only a few corners. Charles Leclerc made a rare mistake and spun of the track against the tyre barrier ten laps before the end of the race. He could continue the race and finished sixth.

“It is always tough to achieve something like that”, says Max after winning the race today. “Yesterday and the day before we were on it, it was looking like a strong weekend. Today you never know with the weather how competitive you will be. As a team we did everything well. This one-two is very deserved.”

Max makes a comparison with the race last year: “The situation was a bit like last year’s race. We started on inters and just did our thing. That is not always easy. You must make the right choice on when to change from inters to slicks. When you are in the lead you do not want to take too much risk. The cars behind you have to push more and take more risk. I drove my own race until the lines became a bit wider. But you must continue to pay attention. When backmarkers are not getting out of the way enough, then you end up on the wet part of the track. Then it can go wrong very quickly. So, you need to stay alert.”

About the late change to soft tyres Max says: “There was quite a gap, so it was easy to make an extra stop. Checo had to, otherwise he would have been overtaken if he had come in a lap later. Our medium tyres were not in top condition, so we did not want to risk it driving them to the end of the race. It was the right call.”

Despite all the points the Dutchman gained he is not thinking about the title fight just yet: “Last year there were a lot of positive moments after which we were quite a bit ahead in the championship, but one DNF and you are back. So it can go up and down very quickly. You want to be constant every weekend. We will have to see how things go in Miami, as it is a new track. But we really needed a weekend like this, after having so many DNFs. That is not what you want when fighting for the championship, but this was a great boost for the team.” 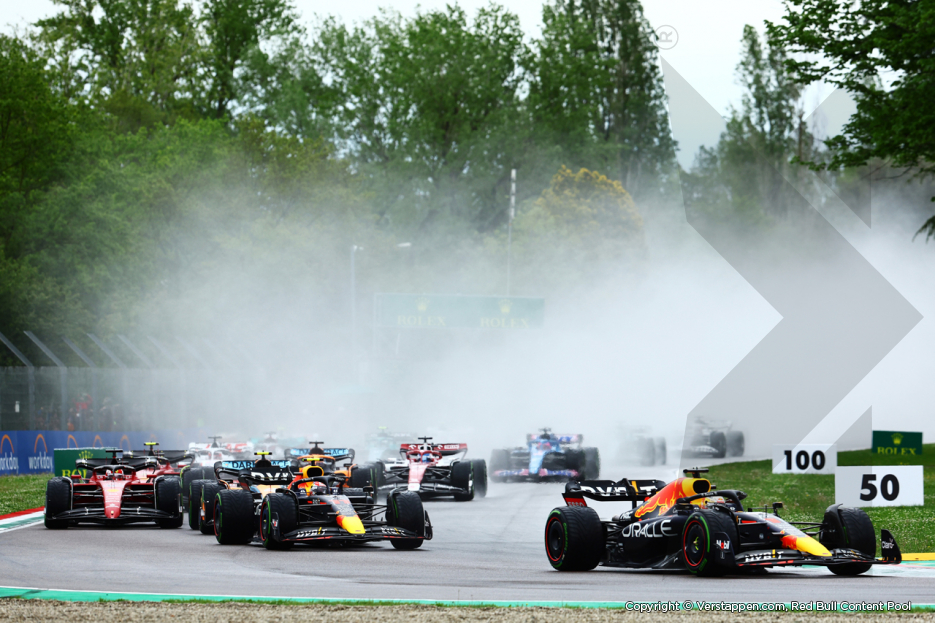 At three o’clock the lights go out for the Emilia-Romagna Grand Prix. It is the thirtieth Formula 1 race on this circuit. While it is dry now, the track is still wet from earlier rain. Race control therefore decided that DRS will not be enabled. All drivers start on intermediate tyres. Verstappen and teammate Perez get away well. Max stays in the lead and Perez moves up from third to second position. Leclerc did not have a good start and falls back into fourth. Norris takes advantage and moves up to third position. Amidst the hustle and bustle of the opening lap pushes Daniel Ricciardo Ferrari driver Carlos Sainz in a spin. Sainz came out on the losing end and got stuck in the gravel, having to retire from the race after only a couple of corners in. The Safety Car comes out on track so the Spaniard’s car can be recovered. Ricciardo can continue after the incident, though he was hit by Valtteri Bottas who could continue with some light damage to his front wing.

The race is restarted four laps later. Everyone gets away well and there are only a few changes in position. In lap seven Fernando Alonso’s sidepod suddenly blows of his car. He was hit when Mick Schumacher spun in the opening phase of the race. The Alpine driver is forced to retire from the race. Leclerc shows that overtaking is indeed possible on the narrow Imola track, he overtakes Norris under loud cheers from the tifosi. Meanwhile Russel’s first attempt to overtake Kevin Magnussen fails, but the second time the Brit gets past. A lap later overtakes Bottas the Danish driver also. Verstappen has increased the lead in lap fourteen to almost six seconds.

Ricciardo is the first to change to slicks in lap seventeen. He changes from intermediates to the medium tyre. A lap later multiple drivers go into the pits for medium tyres, including Perez. Verstappen, Leclerc and Norris pit in lap twenty. Max has a good pitstop of 2.3 seconds and comes out of the pitlane, back in the lead. Leclerc is not so lucky, his pitstop takes 3.7 seconds. He comes out in second position, but a couple corners later is overtaken by Perez, who meanwhile got his tyres up to temperature. Leclerc puts pressure on the Mexican but cannot get past. bij de Mexicaan, maar kan er niet voorbij. 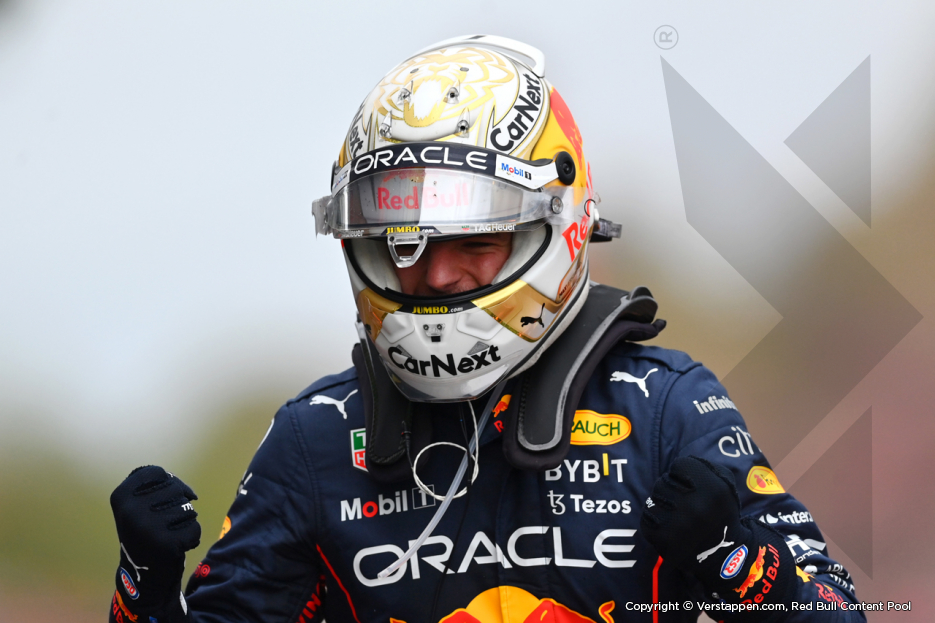 The race is not getting any better for Alpine, Ocon gets a five second time penalty because of an unsafe release, Hamilton can narrowly prevent a crash in the pitlane. The yellow flag is shown in lap 26 when Schmacher goes into the grass and spins when getting back on track. The German can resume his race. Max keeps the pace up, in lap thirty he has increased the lead to his teammate to ten seconds. Four laps later race control announces that DRS will be enabled.

Leclerc makes an expensive mistake in lap 54 while hunting for Perez. The Monegasque spins and hits the tyre barrier. With light damage he returns to the pits for a new front wing. He comes back out on track in ninth position.

In the last lap there is some light rain again in Imola, but that causes no problems for the drivers. Bottas increases the pressure on Russell in the final phase of the race. He is closing in on the Mercedes driver, but the Finn comes short to overtake. Max Verstappen is the first to come over the finish line. Winning yesterday’s sprint race, the win on Sunday and the point for fastest lap he gains 34 points and moves up to second place in the championship. Teammate Perez finishes second, followed by Lando Norris in third. Russell and Bottas take fourth and fifth position. Leclerc can move up a couple of places in the last few laps and finished in sixth place.