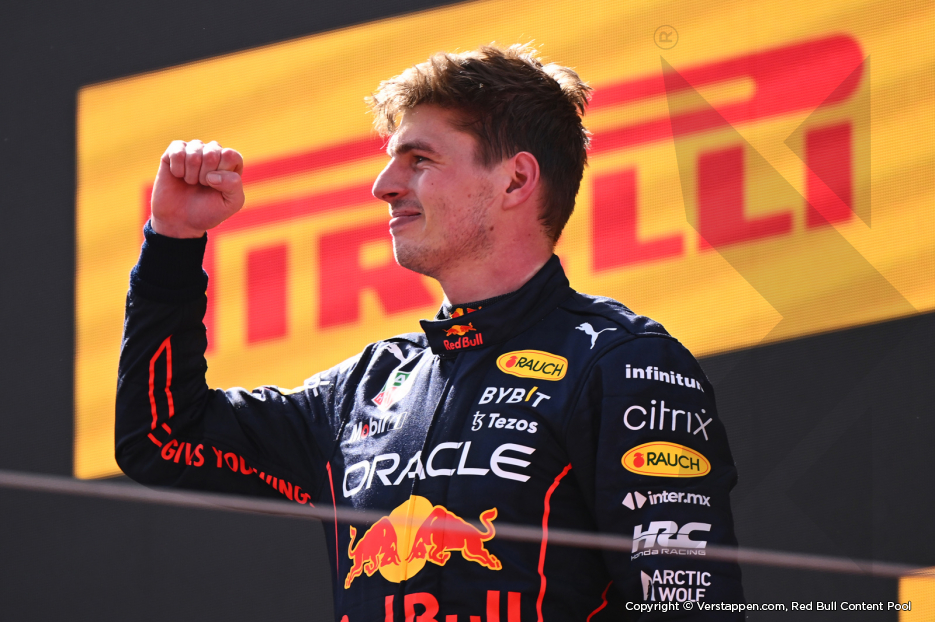 Max Verstappen sealed a 1-2 finish for Oracle Red Bull Racing by winning the 2022 Spanish Grand Prix ahead of Sergio Perez. George Russell scored a podium by completing the top three in his Mercedes. Following Max’ win and Ferrari’s Charles Leclerc failing to finish, the Dutchman takes the lead in the world championship.

“I went off in turn four after a sudden gush of tailwind. After that, I was stuck in a train. It was frustrating because my DRS wasn’t always working. That made it very tough to overtake”, said Max when reflecting on the opening half of the race.

“But we managed, with the right strategy, to drive our own race and eventually take the win. It was a tough start but a good ending. It was all about staying focussed, especially when I lost a lot of time and when the DRS didn’t work when I had some good opportunities to overtake Russell. But I’m happy I won the race and happy for Checo to complete a good result for the team.” 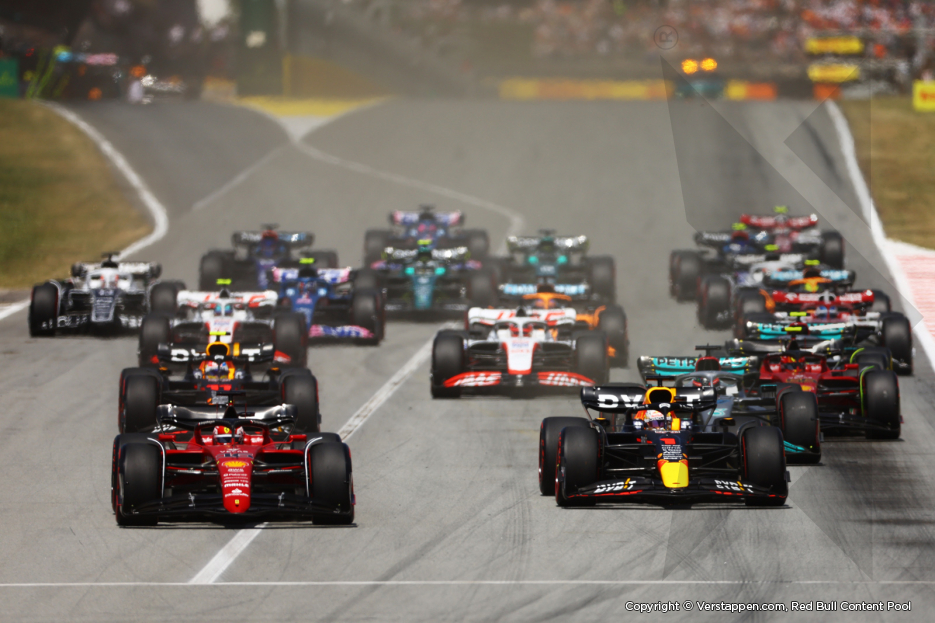 Prior to the start of the Spanish Grand Prix, Red Bull have changed several components of Max’ DRS system to prevent the issues that plagued the Dutchman in qualifying. Meanwhile, Alpine’s Fernando Alonso lines up at the back of the grid following a power unit change.

At the start, all drivers bar Lewis Hamilton, start on the soft Pirelli tyres with the Mercedes ace opting for the mediums. As the lights go out, Max enjoys a clean launch off the line, forcing Leclerc to close off the inside line. The latter leads into turn one and confidently hangs onto the lead. Further back, Hamilton suffers a puncture following a skirmish with Haas’ Kevin Magnussen.

Hamilton’s teammate George Russell enjoys a better start to the race, settling behind Leclerc and Max in third. At the front, the Ferrari driver appears in control and slowly edges away from his Dutch rival.

Besides the ambient and track temperatures soaring, the Circuit de Barcelona-Catalunya is affected by strong gusts of wind. Carlos Sainz is the first victim of these strong winds, with the Ferrari spinning in the gravel at turn four. Soon after, the same happens to Max, with the Dutchman not making the corner. After a brief excursion through the gravel traps, both drivers are able to continue but the duo have lost valuable positions.

Max has dropped to third behind Russell and is trying hard to regain second place. Although the Dutchman closes the gap sufficiently to be within DRS range, the DRS-flap on the RB18 appears temperamental, often quickly closing or not opening at all.

Mercedes and Red Bull call their leading drivers in on lap 14 with both teams pulling off solid pit stops, meaning the pair reappear on the racetrack in the same order.

At the start of lap 24, Max makes a move on Russell going into turn one, but the Mercedes driver tenaciously hangs in on the outside of the first corner, holding onto the position. In the meantime, Perez has closed the gap to the battling duo and asks the team if Max can make way for him.

In a surprising turn of events, Charles Leclerc’s Ferrari loses power and the Monegasque is forced to retire his car, meaning the scrap for second between Russell and the two Red Bulls is now a fight for the lead. 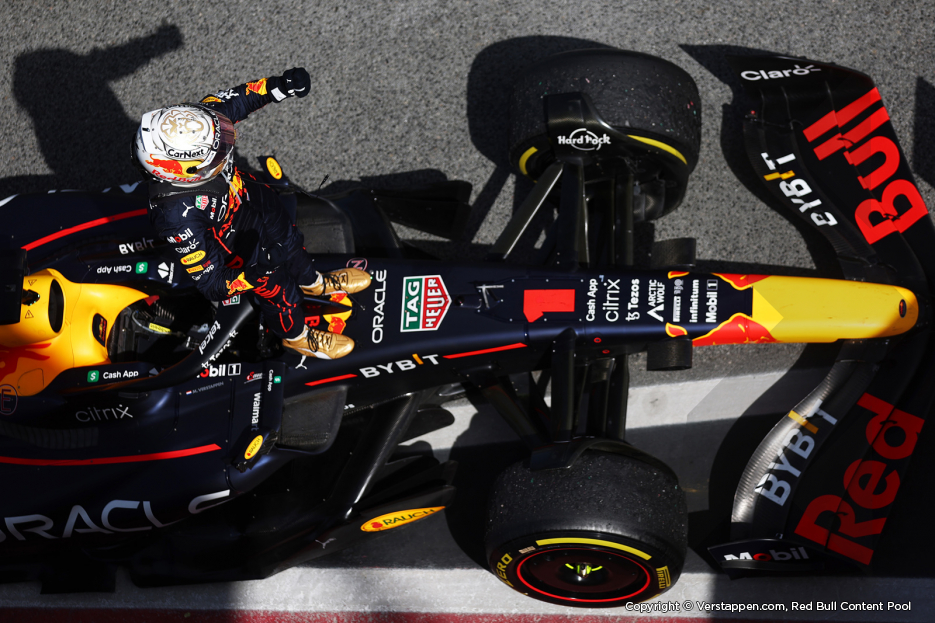 Red Bull opt to put Max on an aggressive three-stop strategy and call him in on lap 29 for a set of soft Pirellis. Max rejoins the race in fourth, behind Bottas. At the front, Russell and Perez fight for the lead. The latter successfully overtakes the former with a move into turn one. Meanwhile, Max has found a way past Bottas and is back in third with his sights set on Russell’s P2. The gap between the Red Bull and Mercedes evaporates quickly and just as Max is within DRS range, the Brittish driver heads into the pits for a set of medium Pirellis.

In lap 38, Perez comes into the pits for his second stop. As the Red Bull mechanics bolt on a set of mediums on the Mexican’s RB18, Max regains the lead of the race. Seven laps later, Max serves his third and final stop of the afternoon, exchanging his worn softs for mediums for the final twenty laps.

With fresh tyres, the Dutchman sets about closing the gap on Perez, who took the lead during Max’s final stop. In a matter of laps, he’s on the tail of the Mexican, who is informed by the team that “you’re on a different strategy than Max, so if he’s faster, just let him through”. Perez responds with “That’s not fair, but okay”, followed by him letting Max by in lap 49.

After Russell completes his final pitstop of the race, Red Bull opt to call Perez in too for a switch to the soft tyres in the hope of taking the point for fastest lap off Hamilton. The number 11 successfully completes his mission by setting the quickest time of the race.

In the closing stages Sainz, Bottas and Hamilton tussle for fourth place with the red side-walled Ferrari and Mercedes comfortably passing the Alfa Romeo on the older medium Pirellis. With Bottas dropping off, Sainz and Hamilton continue to battle. The seven-time champ draws first blood passing the Ferrari on the main straight. However, a couple of laps from the end, Mercedes inform Hamilton about cooling issues forcing the silver arrow driver to trundle home with Sainz claiming fourth place.

At the very front, Max leads home a 1-2 finish for Red Bull ahead of Sergio Perez and George Russell. The win also hands the reigning champion the lead in the standings.