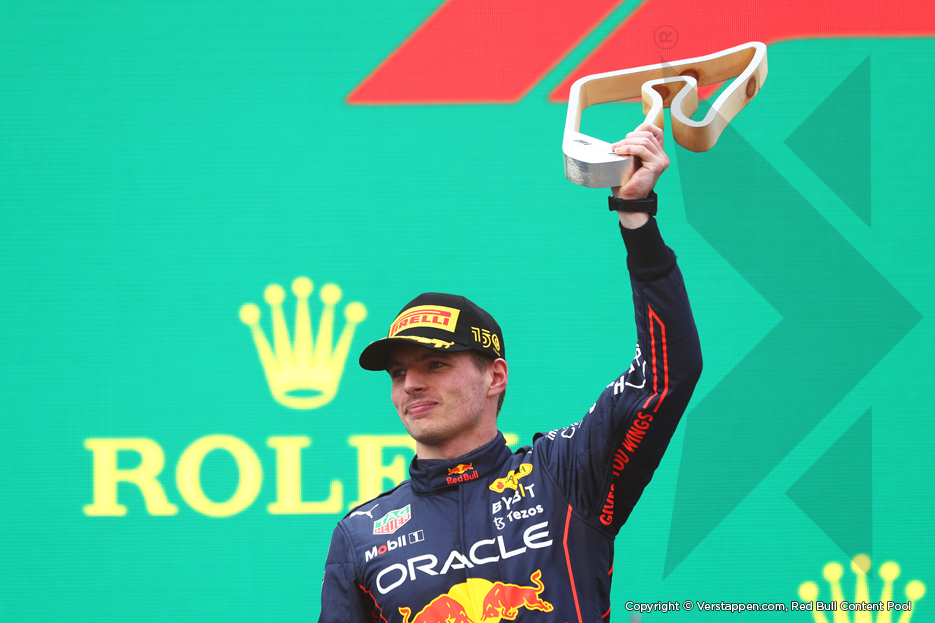 “It was a difficult day”, says Max after the race. “It was not a good race. We had a hard time with the tyres. I did not make any difference what compound we used. There was just too much tyre degradation to be able to attack, especially Charles. Already after two laps in every stint I lost a lot of speed. It felt a bit like an ‘off-day’. Second position is a good result on a difficult day.”

Asked if he was hindered by the orange smoke, Max answers: “Not at all, the orange smoke was fun. It is a great colour. I do not mind driving through that”, says Max. “It is great to see so many fans coming to Austria. Unfortunately, I could not give them the victory, but I think second position is still a good result.” 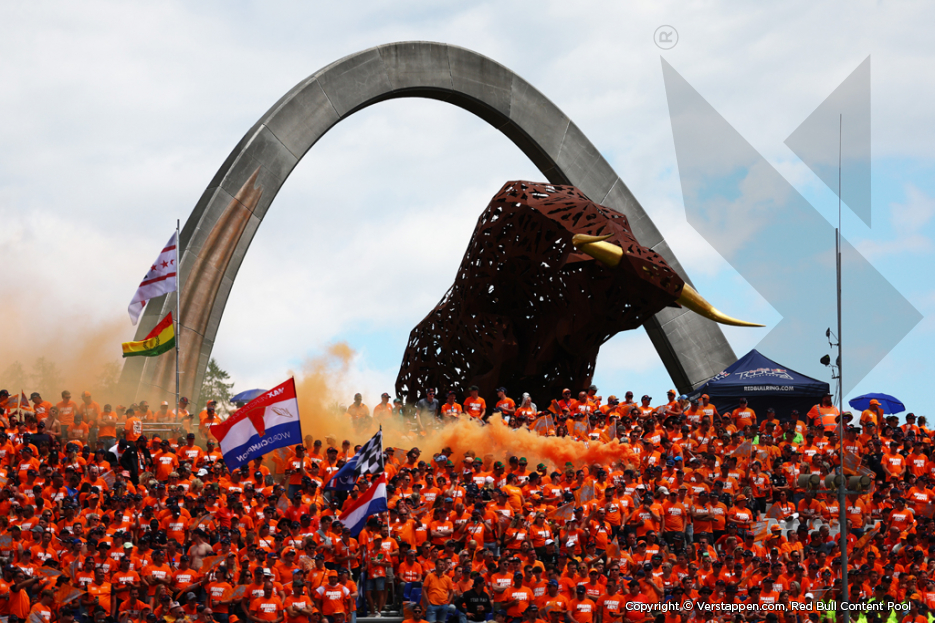 Max starts on pole at the Red Bull Ring, thanks to winning the sprint race. When the lights go off, the Dutchman has a good start. His teammate also has a good start, but Pérez ends in the gravel after only a couple of corners when touched by George Russell. After a pitstop he can continue his race but is now at the back on hard tyres. Russell is given a five second penalty for the incident. Leclerc can stay close to Verstappen and stays within DRS range. Carlos Sainz, in third position, is losing some ground.

In lap ten the Monegasque starts the attack. He puts his car next to Max but cannot overtake. Max reports on the radio that he cannot stay ahead for long. Two laps later he is overtaken by Leclerc in turn four. Max responds by going into the pits. Oracle Red Bull Racing seems to go for a different strategy than Ferrari. Verstappen comes back out on track in eight position with hard tyres on his RB18. He moves back up quickly and in lap eighteen he is fighting with Hamilton for third position. It does not take long for Max to overtake Lewis. In lap twenty the top five is formed by Leclerc, Sainz, Verstappen, Hamilton and Lance Stroll. Of these five only Max has made a pitstop.

While Verstappen is closing in on the Ferraris, there is a nice battle going on in the midfield between Kevin Magnussen, Lando Norris, Fernando Alonso, Mick Schumacher and Zhou Guanyu. At times there are three cars next to each other on the track. Magnussen comes out on top after he overtakes two of the other drivers. Zhou gives up and goes in for a pitstop. 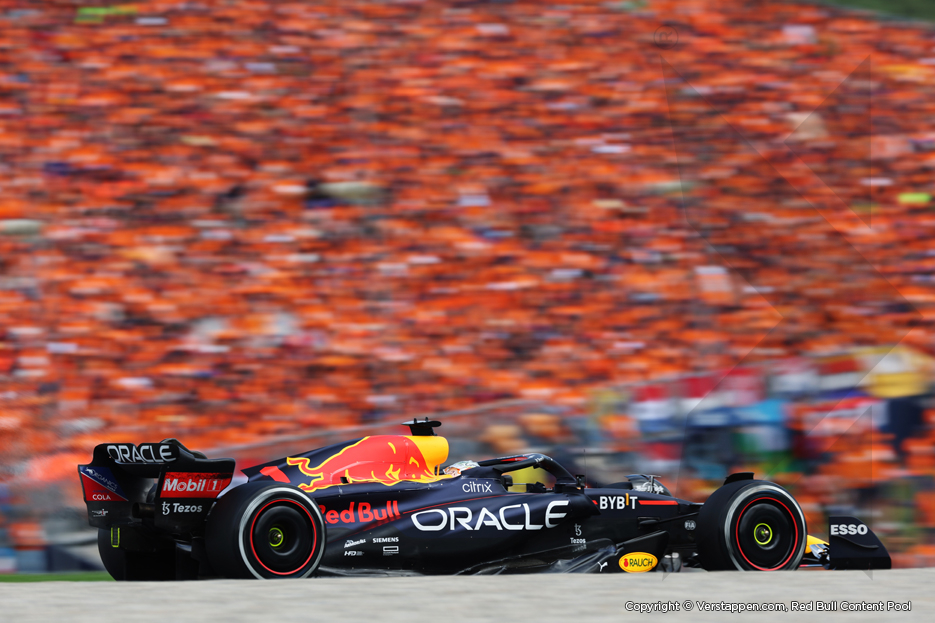 The damage for Pérez is too much and he parks his RB18 in the pit box in lap 26. At the same time, the leader of the race, Leclerc comes in. He comes back out on track in third position on hard tyres. One lap later Sainz also comes in for hard tyres. Verstappen takes the lead again. Leclerc quickly closes in on Verstappen and he overtakes the Dutchman in lap 33. Max reports on the radio that the grip of his car feels a bit unpredictable.

Meanwhile there are many warnings about track limits. Both Gasly and Norris get a five second penalty in lap 35. Verstappen gets under pressure from Sainz. But before the Spaniard can attack, comes Max in for another pitstop. He changes to another set of hard tyres and comes back out on the Red Bull Ring in third position.

In lap 40 the top five is formed by Leclerc, Sainz, Verstappen, Hamilton and Esteban Ocon. In that same lap Vettel gets pushed into the gravel by Pierre Gasly. The Frenchmen gets a five second penalty. Leclerc makes another pitstop in lap 49 and changes to new hard tyres. His teammate also comes in for a new set of hard tyres. With twenty laps to go after these pitstops, the top five is now formed by Verstappen, Leclerc, Sainz, Hamilton and Alonso. Latifi parks his Williams in the pit box and is the second driver to retire from the race. 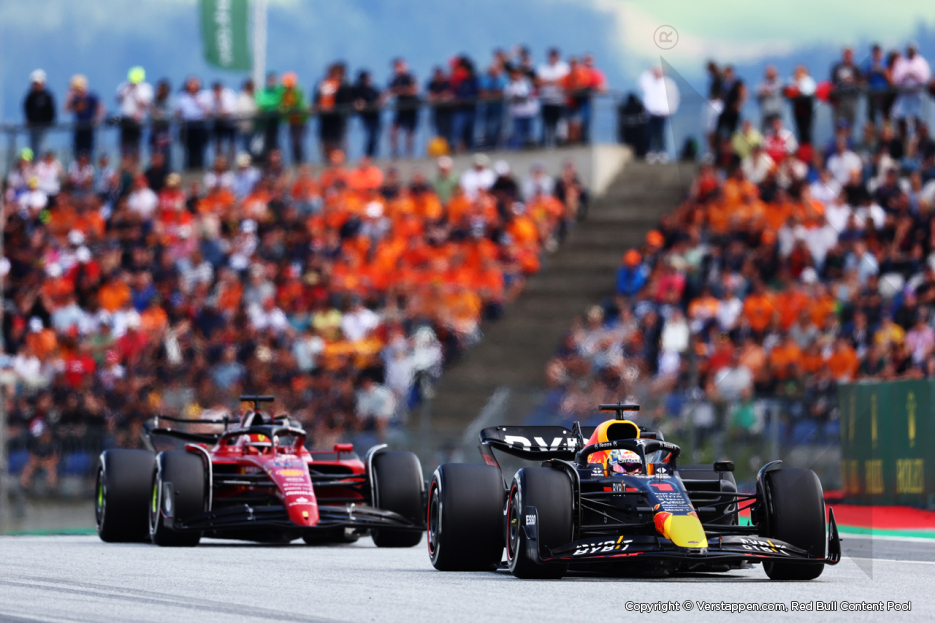 Again, Leclerc closes in on Verstappen quickly. Soon he takes the lead after an overtake in turn three. Max complains over the radio about the traction of his car. Sainz is also closing in on the Red Bull of Verstappen. It seems inevitable that he is going to overtake the Dutchman, until this dream goes literally up in flames. The Spaniard is forced to park his car with the engine on fire. Sainz can get out of the car unharmed. The burning Ferrari causes a Virtual Safety car and both Leclerc and Verstappen come in for medium tyres. Max is four seconds behind Charles when the Virtual Safety car ends. Leclerc reports that his throttle feels strange. The team says that it looks like the pedal gets stuck sometimes. Despite his throttle problems he stays in the lead.

Leclerc is the first to finish the race after 71 laps. Max takes second place, one and a half second behind. Hamilton finishes third and takes the final podium place. Russell and Ocon complete the top five. This brings us to the end of an exciting race in the Austrian mountains, and half way the 2022 Formula 1 season.