Published on 28 August 2022 by Mike Motilall 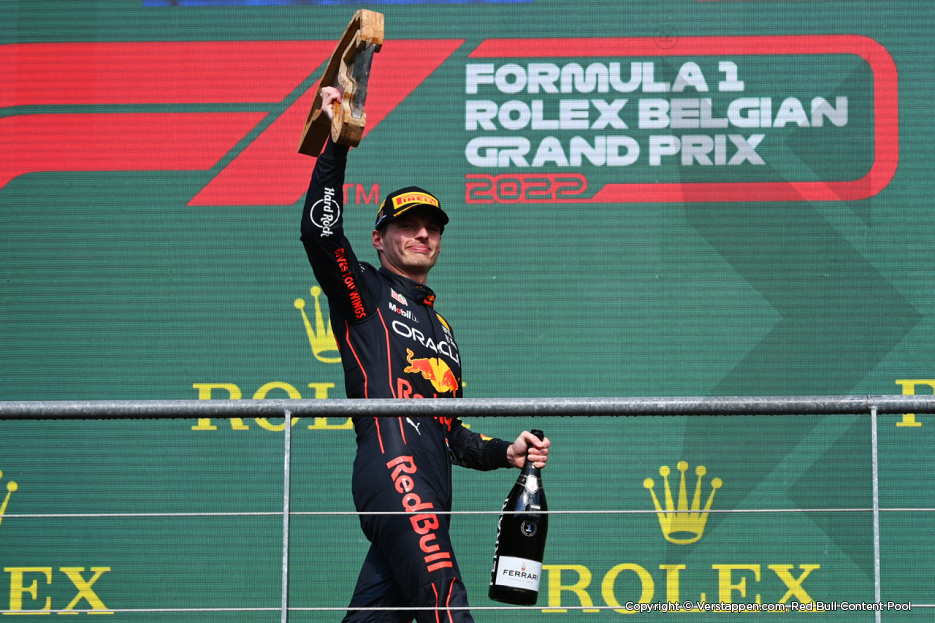 Max Verstappen took the victory of the Belgian Grand Prix magnificently home. Despite the fact that Max was without a doubt the fastest during qualifying on Saturday, the Dutchman was forced to start the race from P14. Max quickly worked his way up to P8 on the first lap, after a short Safety Car period, Max then passed five other drivers over four laps. Due to an excellent strategy, Max was able to also overtake team mate Sergio Perez without any problem after which Verstappen took off and left Perez in the dust. With a 17-second lead on his team mate, Max raked in his ninth victory of the season. The cherry on the cake was Max also taking the extra point for fastest lap. Perez added to the festivities by taking second place for Red Bull, while Carlos Sainz rounded out the podium for Ferrari.

While his fans cheered him on, Max had the following to say after the race: “It was a hectic first lap and also difficult to stay out of trouble. So many things were happening in front of me. Once we settled in after the Safety Car, the car was really on rails. I picked the right places to pass people and we could look after our tyres well. That’s how we made our way forward. Once we were in the lead it was about managing everything. This whole weekend was incredible. It was a weekend I couldn’t have imagined before, but I think we want more of them so we’ll keep on working hard.”

After an excellent result on circuit Spa-Francorchamps, Max is looking with high hopes to the coming Grands Prix on Zandvoort and Monza: “The engine is running fine, we also have less drag on the car which has been very different compared to previous years. That’s why I think we will be able to also do well on Monza. However, I cannot promise we will also be that strong on Zandvoort like we were here. Looking at the layout of the circuit I think that Ferrari will be strong there. After winning here I am looking forward to Zandvoort and hopefully we will be able to score some good points there. But first I am going to enjoy today and we’ll see what we can do next week.” 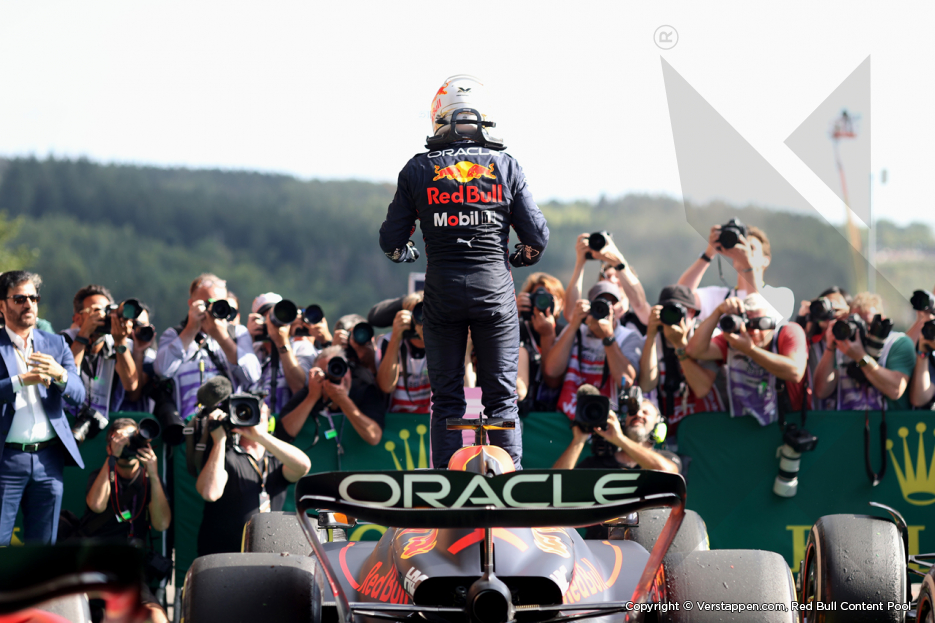 It rained penalties after qualifying finished on Saturday. Despite the fact that Max was the quickest by far during qualifying, he had to start the race from P14 due to him exceeding the amount of engine parts allowed to be used. Just like Valtteri Bottas and Charles Leclerc, Max starts on the soft compound tyre. The Monegasque is starting immediately behind of Max in P15. Carlos Sainz, Charles' team mate at Ferrari, starts from pole and also on the soft compound, while the rest of the drivers start the race on the medium compound tyre. Even before the start of the installation lap, Pierre Gasly is missing on the grid. The Frenchman, who would be starting from P8, starts the race from the pit lane, just like team mate Yuki Tsunoda.

At the start, Sainz maintains his lead, while Perez gets poorly off the line from P2 and is overtaken by both Alonso and Hamilton. Hamilton and Alonso run into each other at Les Combs. The Mercedes-driver is airborne because of Alonso’s left front wheel and returns back to Earth with a serious thud. It then becomes obvious that Hamilton has damaged his suspension and the Briton needs to shut down his Mercedes track side. He is the first to drop out from the race while Alonso is able to continue on without any problem. Behind him, Max is having an excellent start and after a chaotic first lap, he is running in P8.

On the second lap, Nicholas Latifi spins at Les Combs and hits the unfortunate Valtteri Bottas. The Finn spins back-to-front into the gravel trap, as he is unable to get out he subsequently becomes the second one to hit the showers. Latifi is able to continue on. Because of Hamilton’s and Bottas’ beached cars, the Safety Car is deployed.

The field is released again on lap five. Max immediately engages his front runners. On the first lap after the re-start, Verstappen overtakes Alexander Albon and Daniel Ricciardo. In the following lap he makes small work of Vettel and after just another one he trades places with Alonso. Verstappen maintains his push forward by taking down Russell on lap eight for third place. 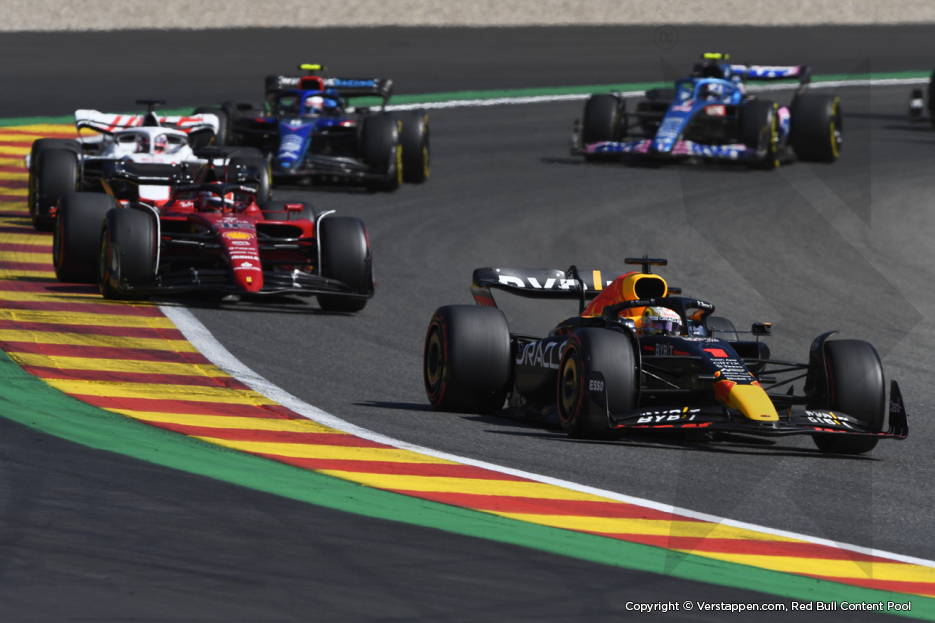 Lap twelve sees race leader Sainz take his first pit stop. The Spaniard swaps the soft compound tyres for the medium ones. Because of Sainz stopping, Perez takes the lead. However, he isn’t able to really enjoy the moment as Verstappen overtakes the Mexican on Kemmel Straight which puts Max in the lead of the race.

After Perez does his first pit stop on lap 15, Max also comes in one lap later. Verstappen changes from the medium compound to the soft one and rejoins on track in second place, some four seconds behind of race leader Sainz. On his new tyres, Verstappen is quickly gaining on Sainz and on lap eighteen, he overtakes the Spaniard on the Kemmel Straight with the aid of his DRS. The Ferrari is clearly no match for the speed of the Red Bull Racing RB18, because on lap 21 it’s Perez’ turn to overtake Sainz. This puts the Bulls in first and second place.

Verstappen pits for a second time on lap 31. With a fresh set of the medium compound tyres, Max remains at the front, unchallenged. During the rest of the race, Verstappen keeps building his lead to eventually win the race ahead of his team mate Perez by as much as 17 seconds. This is Verstappen’s 29th Formula 1-career Grand Prix-win. With Perez’ second place, Red Bull scores their fourth one-two of the season, while Perez also takes over second place in the championship, well behind of Verstappen though. Carlos Sainz comes in third fastest, with behind him George Russell in P4. Charles Leclerc crosses the line in fifth but is given a five-second time penalty for speeding in the pit lane and subsequently finished sixth fastest, behind of Fernando Alonso. Esteban Ocon, Sebastian Vettel, Pierre Gasly and Alexander Albon round out the top ten.