Published on 11 September 2022 by Mike Motilall

Max Verstappen has won the Italian Grand Prix and with that has also won a straight five races in a row. The world champion has never been on the Monza podium before. Max had a great opening of the race, starting from seventh, but was able to pull out a bit more than the Ferraris. The tifosi were quite displeased when the race finished behind the safety car. Charles Leclerc took the second spot while George Russell came in third. For the first time since 2006, we were able to witness two Dutchmen in Formula 1 due to Nyck de Vries making his Grand Prix-debut. He finished ninth fastest and took home some valuable points as well.

“We had a great race”, says Max. “We really had the pace to win today. We were the quickest on every compound and the degradation was also good. So we had a really good race car. Unfortunately we didn’t get a re-start after the safety car came out. Overall, we had a really good day.”

The Dutchman was running in second place, immediately after the start, behind Leclerc’s Ferrari. Max: “The start was very good. Initially you don’t expect to get such a start and I also had a clean chicane. I could quickly get back into my rhythm and get back into second. The car was really good on the tyres. It was really enjoyable to drive today, even though it was quite hot out there. It was just a great day for us.”

It’s the first time ever that Max stood on the Monza podium. “It took a bit of time to be on a great podium like this. But finally we're on it”, says a happy Max.

Max is also visibly happy for his fellow countryman Nyck de Vries, who took home points on his Formula 1-race debut. Max: “This was of course Nyck’s first race. He will be feeling his neck for sure tomorrow. But a great result for Nyck.” It’s the first time in Formula 1 history that two Dutchmen finish in the points. “That is quite positive”, says Max. “Hopefully that will happen more often.” 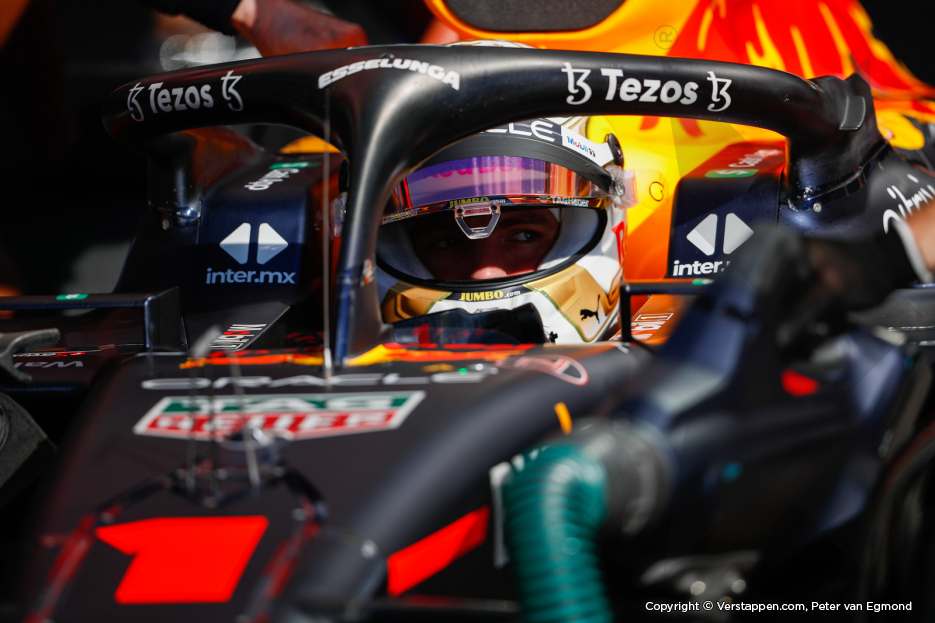 Once again it’s a sunny day on Monza with an ambient 27 degrees beating down and a track temp of 44 degrees. Max Verstappen takes off from seventh on the grid. During qualifying he finished second fastest but was dropped to fifth because of an internal combustion engine change. He starts the race next to country man Nyck de Vries, who makes his Formula 1 race debut. He is driving Alexander Albon’s Williams who is suffering from appendicitis. Max is most definitely not the only one who has been slapped with grid penalties. No less than eight other drivers have also received grid penalties, including Sergio Pérez, Carlos Sainz and Lewis Hamilton.

Max manages to immediately take down two of his opponents at the start of the race. On lap two, he is already running in third, behind Russell and Leclerc, the latter maintaining his lead from pole position. On lap five, Max is chasing down Russell and manages to overtake him with the aid of his DRS. The opening stages of the race are without any major problems. Pérez, Max’ team mate at Oracle Red Bull Racing, runs into a problem on lap eight. After a pitstop, flames can be clearly seen coming from his right front tyre. Luckily, these don’t pose any real threat for the Mexican any more.

On lap twelve, we see a short Virtual Safety Car. It’s Sebastian Vettel who parks his Aston Martin track side with an issue. Charles Leclerc seizes this opportunity to make a pitstop. He straps on the mediums as he drops back to third fastest on track. Verstappen stays out and takes over the lead. Leclerc pulls out a couple of fastest laps. He is then told on the radio not to short shift when exiting the corners. Apparently this doesn’t even slow him down. Team mate Sainz has mean while moved up from eighteenth on the grid to fourth. De Vries is running nicely in ninth, well in the points. On lap 25, Max comes in for a set of the mediums. He rejoins ten seconds behind of Leclerc, who re-takes the lead. On lap 32, Fernando Alonso is called in by his team due to an issue with his car. He doesn’t make it back to the track and drops out. Ferrari opts for a different strategy for Leclerc, he heads back in for a second time to strap on a set of the softs. He rejoins in second, twenty seconds a stray from Leclerc. Leclerc keeps closing the gap to Verstappen by some tenths but that is not enough to really pose a threat for the Dutchman. Not much later, things take a turn for the worse for the men in green: Lance Stroll gets called in by his team due to some issue. Just like his team he also drops out.

On lap 46, Daniel Ricciardo’s McLaren calls it quits. This triggers a safety car situation. The tifosi are up for an exciting finale as the grand stands suddenly come alive. Many drivers head in for a pitstop, including the numbers one and two in the race: both Verstappen and Leclerc come in for the softs. De Vries choses to remain outside and is the only one in the field on the mediums. Because of a mistake by the FIA, the race finishes behind the safety car. The safety car has falsely picked up car number three, Russell, in the race. This means that the safety car needs to let a great many cars by. They also need to overtake the front runners in order to be able to rejoin the pack. This is impossible to be done before the end of the race. Because of the mistake, the cheering by the tifosi quickly turns to anger. They have been robbed of the chance to see Leclerc engage an attack on Verstappen. With this the Italian Grand Prix finishes in a very remarkable manner. Verstappen comes out on top followed by Leclerc and Russell. Sainz and Hamilton round out the top five. Nyck de Vries is able take home some valuable points on his Formula 1-debut while he has also been voted Driver of the Day.