Max Verstappen finished eighth in qualifying for the Singapore Grand Prix. On a drying track in the final phase Max seemed well underway to pole position, until just before the end of the lap he was told by the team to abort and box because of the RB18 running out of fuel. Therefore, Verstappen had to settle for eighth position. Charles Leclerc took pole, with Sergio Perez in P2 and Lewis Hamilton in P3.

After qualifying a disappointed Verstappen says: “Incredibly frustrating and this should not happen. When the car is fuelled for five laps and you want to drive six, then that is not right. The lap before went well, but they told me to abort. Then in the final lap they told me to box because we ran out of fuel. We should have completed the previous lap when you know it is not going to work in the next. But somehow, we found out too late.”

Max continues: “We had good pace, and everything looked good. Especially under the circumstances, it is great when you have to find the limits. I am not happy at all at the moment. It is always a team effort, I can make mistakes and the team can make mistakes, but it is never acceptable. Of course, you will learn from it, but this is not good.”

Is a victory still possible from P8? “Here in Singapore, it is difficult. It is a bit like Monaco, it is super hard to pass. You can maybe do a little bit with strategy, but at the moment I am not really in the mood to think about the race tomorrow. Of course, once I jump in the car, I will always give it my very best, but at the moment I am just super frustrated about what just happened.” 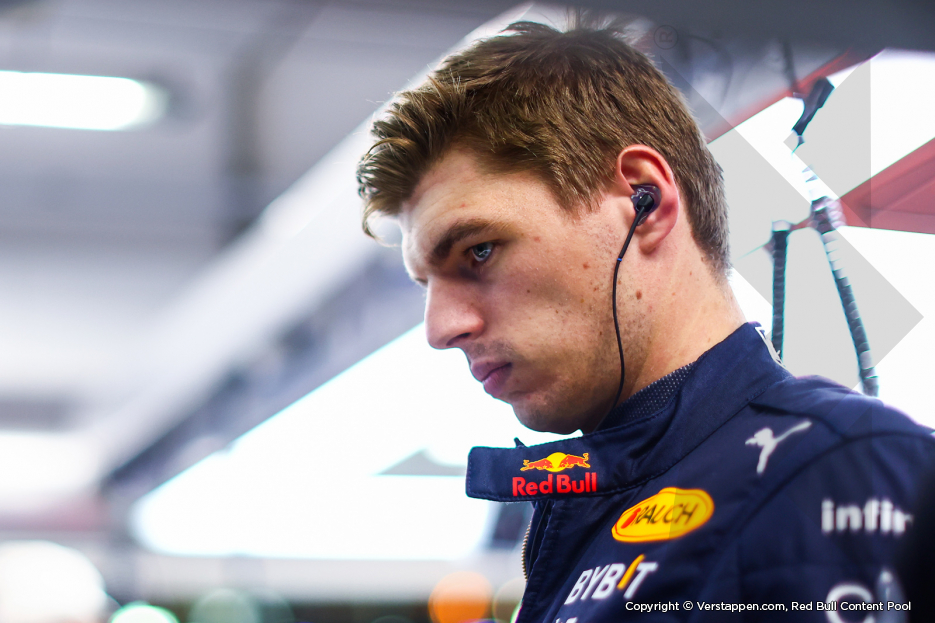 Prior to qualifying it has rained a lot in Singapore, and despite it not raining anymore at the start of Q1, the Marina Bay Street Circuit is still very wet at places. All drivers decide to come out on intermediate tyres. Max has to abort his first flying lap because of a yellow flag, but in his second quick lap he sets the fastest time (1:54.395), but Charles Leclerc goes faster not much later. After a short stay in the pits Max comes out again for one more quick lap. He improves his time to a 1:53.057 and finishes Q1 as fastest. After the first qualifying sessions the following drivers drop out: Valtteri Bottas (P16), Daniel Ricciardo (P17), Esteban Ocon (P18) and the Williams drivers Alexander Albon and Nicholas Latifi will share the last starting row on the grid.

At the start of Q2 it is still too wet for slicks, so again all drivers come out on intermediates. Verstappen sets a 1:52.723 in his first flying lap of Q2, good for second position. With just under five minutes to go both Aston Martin drivers dare to change to slicks. Max does not do any more timed laps and finishes in third place, safely through to Q3. The following drivers drop out of qualifying after the second session: George Russell (P11), Lance Stroll (P12), Mick Schumacher (P13), Sebastian Vettel (P14) and Zhou Guanyu (P15).

At the start of Q3 Verstappen decides to come out on soft dry weather tyres. Only Yuki Tsonoda and Kevin Magnussen are still on intermediates. As the tyres need to warm up and the track continues to dry the lap times come down after each lap. With four minutes to go Max sets a 1:51.395, putting him in second position behind Hamilton. The Dutchman starts his final flying lap just before the flag comes down to benefit from the best possible track conditions. Verstappen is well under the fastest time of Leclerc and seems to be underway to take pole position, until just before the end of the lap he is told to abort and come into the pits. The RB18 was running out of fuel.

Max finishes qualifying in P8. Charles Leclerc takes his ninth pole position of the season, with Sergio Perez only 22 hundredths of a second behind in P2. Lewis Hamilton finishes third and Carlos Sainz in P4. Fernando Alonso finishes in fifth position with behind him Lando Norris in P6 and Pierre Gasly in P7. Behind Verstappen complete Kevin Magnussen and Yuki Tsunoda the top ten.