Max Verstappen second in Spanish GP: 'Not much more we could have done' 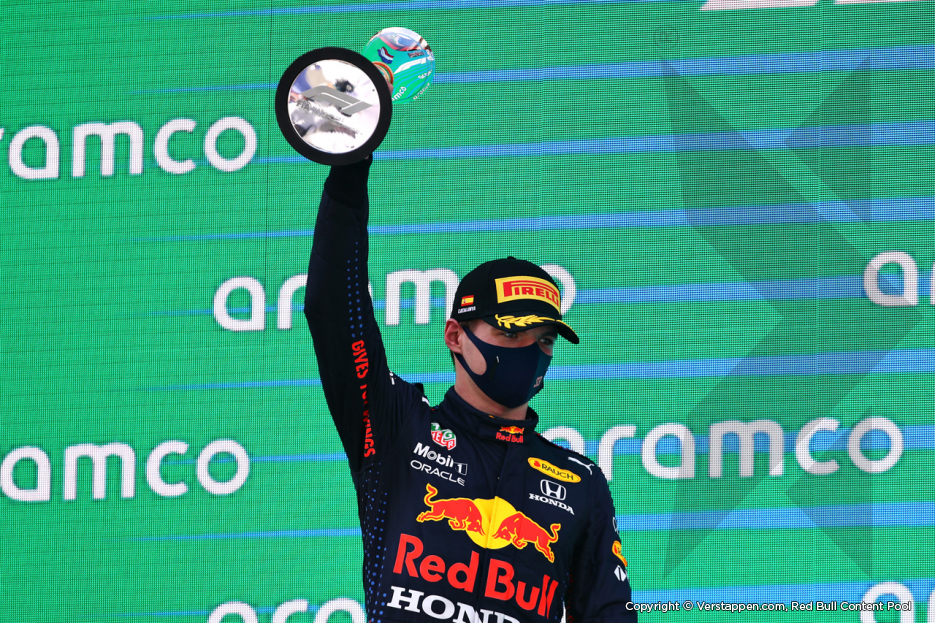 Max Verstappen finished second fastest in an exciting Spanish Grand Prix. Starting from second, Max made a bold move by out braking Lewis Hamilton to take the lead at Turn one. Both before and after his pit stop, Verstappen was kept under pressure by Hamilton. While Max stayed out, the Briton decided to do another pit stop with still 23 laps to go. On his older tyres Max was not able to compete with Hamilton and with just six more laps to go, he was quite simply overtaken by the Mercedes-driver. Max went in for his second stop and rejoined in second behind Hamilton who won the race eventually. The Dutchman also grabbed the final point for the fastest lap. Valtteri Bottas rounded out the podium.

Despite the fact that Max was leading the major part of the race, afterwards he indicated that he could see what was coming: ‘In a way I could see it coming. Already with the softs he was faster and on the medium compound he clearly had more pace. There was not much we could have done. I tried as best as possible to drive my own race and manage my tyres, but for some reason we are a bit slower and wear our tyres slightly more. So when Hamilton went for another stop, I knew it was over. I was already struggling with the tyres and you could see that per lap they were getting closer and closer. So I was kind of a sitting duck.”

At the start of the race Max boldly took the lead. The Dutchman explains his lightning start: ‘The start was fine. At the first corner, he who brakes last is the one to come out on top. I fully went for it otherwise it would have been difficult to stay ahead. When we were finally in the lead, I tried everything I could to stay ahead but today we were just not fast enough.”

Lewis decides to come in on lap 43 for his second stop, but Max stayed out. Verstappen does not share the view that it made a lot of difference regarding the outcome of the race: “When you are in the lead, you don’t want to rejoin in the middle of traffic after your pit stop. But it makes it a lot more easier when you have a clear advantage. If we had done a second stop, I am not sure if we would have been able to fight our way back. Nevertheless I tried everything I could.”

Max is determined to work hard together with the team to make life difficult for Mercedes: “It shows we are not there where we want to be, so we’ll have to push hard and catch up.  Because at the moment we are a little bit slower.  Compared to last year it’s a big jump forward.” 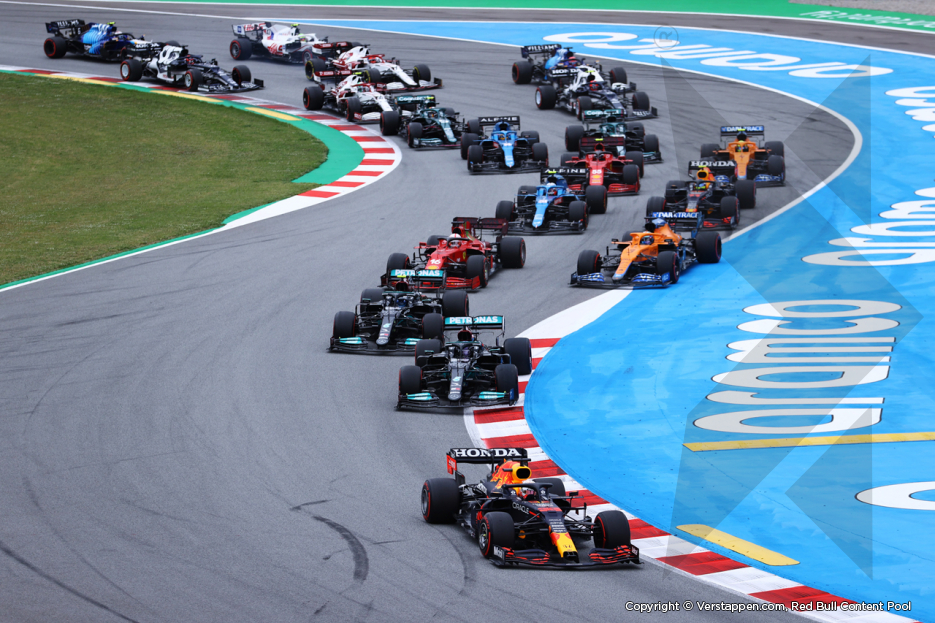 It’s cloudy with a small chance of rain before the start of the fourth race of the season on Circuit de Barcelona-Catalunya. The entire field starts the race on the softs except Kimi Raikkonen, the medium compound tyres have been strapped on to his Alfa Romeo.

At the start Max gets very well off the line from second and almost immediately is next to Hamilton who started from pole. Entering the first corner, Max brakes extremely late on the inside and with a bold move he takes over the lead from Hamilton. Charles Leclerc overtakes Valtteri Bottas for third, while Daniel Ricciardo and Sergio Perez are fifth and sixth after the start. After the first lap, the pack crosses the line without any incidents.

Yuki Tsunoda comes to a standstill on lap eight in his AlphaTauri at Turn ten. The Japanese rookie is unable to continue on and becomes the first one to retire from the race. The Safety Car is deployed and the cars are stringed together. On lap eleven the SC heads back in and Max immediately pulls a gap at the re-start. Preventing Hamilton to launch an attack at Turn one. In the following laps, Hamilton is constantly almost a second down on the Dutchman.

On lap 25 Verstappen gives up the lead and comes in for his first pit stop. He swaps his soft tyres for a set of the medium compound ones. After a somewhat slow 4.2 second pit stop Max rejoins in fifth. Behind team mate Perez who lets him by a few corners later. On lap 29 Hamilton comes in to swap his softs for a set of the mediums. The Mercedes-driver rejoins in second, six seconds behind Verstappen, who has retaken the lead again. Having stopped earlier than Leclerc, Bottas has regained the third spot from the Ferrari-driver. 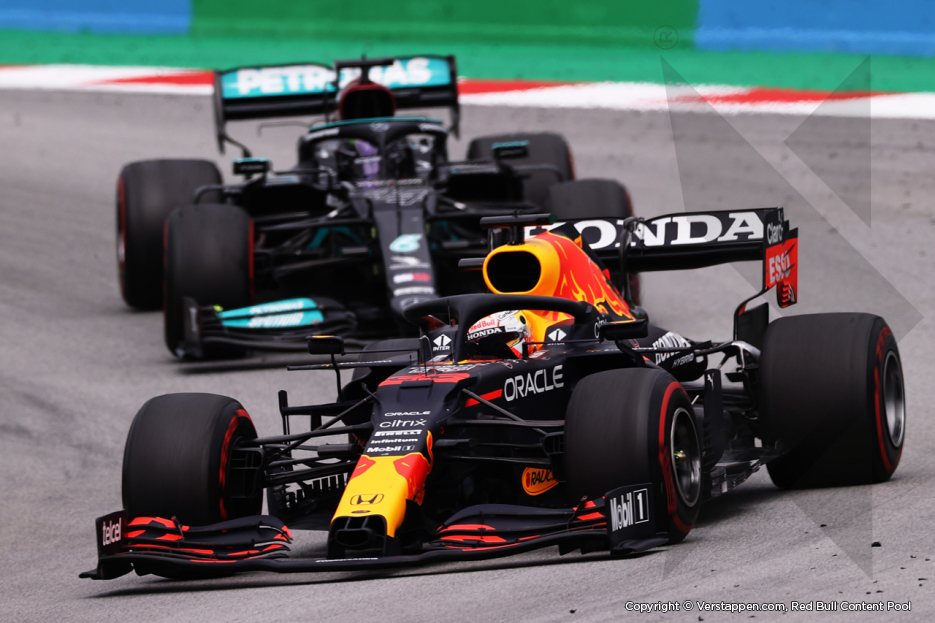 On his fresh tyres, Hamilton starts stringing fastest lap time together and the gap to Verstappen clearly starts to shrink. On lap 34, Hamilton is once more within a second from Verstappen. The Briton gets DRS on a few laps but is unable to launch an attack on Verstappen. Hamilton then decides to head back in on lap 43 for his second pit stop. On a fresh set of the mediums Hamilton rejoins in third, behind team mate Bottas and trailing leader Verstappen by some 25 seconds. He has decided not to stop for fresh tyres.

Perez overtakes Daniel Ricciardo on lap 47 with a smart move on the outside at Turn one, this puts the Mexican in fifth place. Meanwhile Hamilton is by far the fastest man on track on his new tyres and is fast gaining on Bottas and Verstappen ahead of him.

Bottas lets Hamilton by on lap 53 for second place, after having received team orders. He then decides to head in to see if he can take the fastest lap time. By then, Hamilton is at that moment just eleven seconds away from Verstappen and is visibly faster than the Red Bull Racing-driver. On lap 60, Hamilton is within DRS-range of Verstappen and on his first attempt he takes the lead from the Dutchman on the straight. Verstappen decides to head in one lap later to change his tyres to a fresh set of the softs. An attempt to lay claim to the extra point for the fastest lap time.

At the front, Hamilton wins his third Grand Prix of this season. Verstappen manages eventually to take the fastest lap time on his brand new tyres. Apart from the eighteen points for second place he can now add an extra point in his one hundredth race for Red Bull Racing. Bottas crosses the line in third, while Leclerc comes in fourth fastest for Ferrari. Perez is fifth, behind him Ricciardo in sixth place. Carlos Sainz is seventh fastest in his home race, while Lando Norris, Esteban Ocon and Pierre Gasly round out the top ten.