Max Verstappen second in Russian GP after crazy final phase: 'Did not expect this'

Published on 26 September 2021 by Kees-Jan Koster 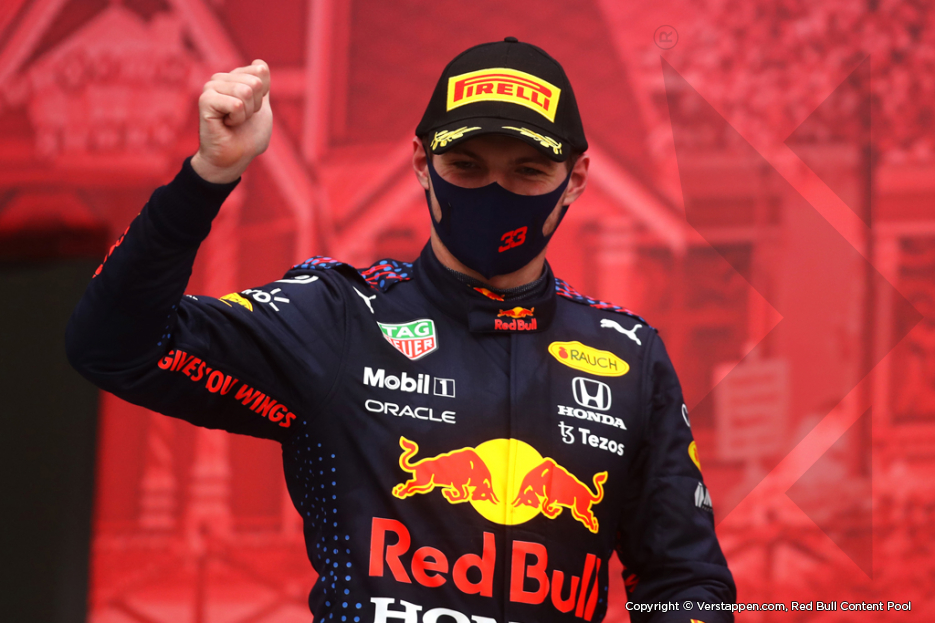 Max Verstappen finished second in the Russian Grand Prix. The Dutchman started from last on the grid and was able to work his way up into P7. It looked like that Verstappen was going to finish in that position, until the weather gods decided to weigh in during the final phase of the race. At first it seemed dry enough for slicks, but the rain persisted. Max changed to intermediates at the right time and profited optimally moving up into second position. Lando Norris who was on his way to win his first race, came out on the losing end when trying to finish the race on dry weather tyres. Lewis Hamilton did come into the pits and won the race. Carlos Sainz for Ferrari completed the podium.

“It was pretty tricky in the lap before we made the call to go for intermediates”, says a satisfied Verstappen after the race. “It was very slippery and we decided to come into the pits at the right time. If we stopped one lap earlier, we had destroyed the inters in the last sector. It is very good that we came from last to second.”

Nevertheless it was not an easy race for the Red Bull Racing driver: “It was hard to pass, once you got stuck it was very easy to damage your tyres. Especially when you start from the back, a lot can happen in the first lap and even the first stint. With other cars also fighting each other, you just have to stay out of trouble and keep it clean. I think we managed that all very well. The rain helped to make the last jump forward and the call to go to inters was crucial.”

With the victory, Lewis Hamilton takes the lead in the championship again, but the gap to Verstappen is only two points, something the Dutchman did not expect before the race on the Sochi Autodrom: “With the penalty we had, to only lose one spot is definitely not too bad. When I woke up this morning, I definitely did not expect this result.” 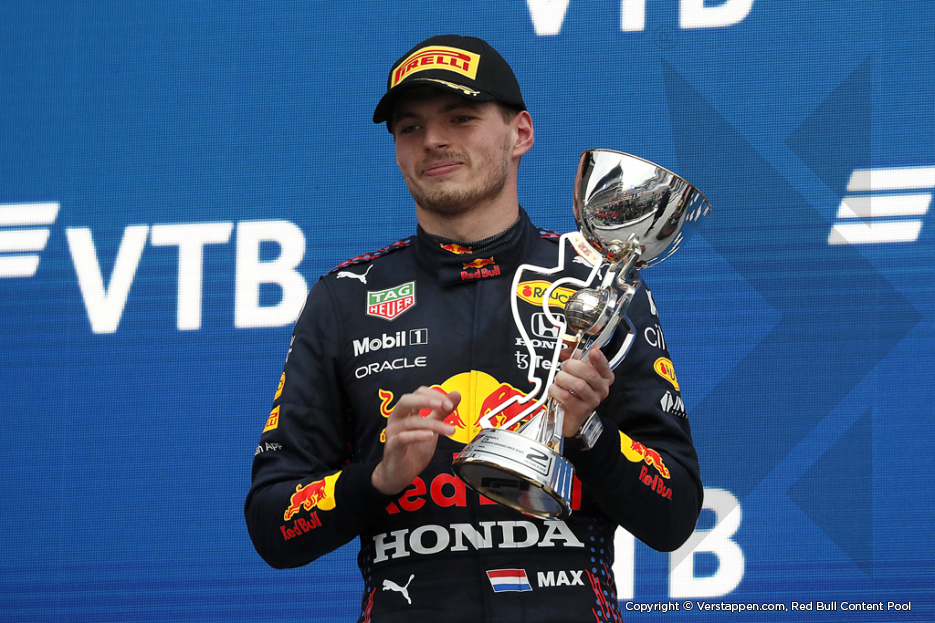 When the lights went out the fifteenth Grand Prix of the season was underway. Max Verstappen did not have a great start from last position on the grid, but he is not to far behind when entering the first corner. Because of the scuffle he chooses to take the ‘escape route’. Ahead of the field, Carlos Sainz takes the lead from polesitter Lando Norris. Lewis Hamilton has a bad start from fourth on the grid and Lance Stroll, Fernando Alonso and Daniel Ricciardo have overtaken him.

Verstappen has moved up three places in the first lap. Not much later he passes Nicholas Latifi for sixteenth position, then Nikita Mazepin for P15. After passing the Haas he turns his attention to Valtteri Bottas. In lap six Max comes into striking distance of the Mercedes and on the back straight the Red Bull Racing driver launches his attack. When entering turn fourteen Verstappen goes to the inside, and leaves the black Mercedes behind.

As the laps pass, Max moves further up: Pierre Gasly and Charles Leclerc fall prey to Verstappen. It is also excited in the rest of the field. Carlos Sainz and Lando Norris are battling for the lead. In lap thirteen the young Brit manages to overtake his former teammate, at virtually the same time as Verstappen overtakes the Aston Martin of Sebastian Vettel.

When a handful of drivers make their first pitstop, Verstappen gets a clear track in front of him and from P6 he closed the gap to the cars in front quickly. The rest of the top six is formed by Lando Norris, Daniel Ricciardo, Lewis Hamilton, Sergio Pérez and Fernando Alonso. Carlos Sainz, Lance Stroll and George Russell have made their pitstops already.

But then Max is stuck behind Fernando Alonso. When Lewis Hamilton in lap 27 enters the pits, Verstappen decides to also come in for a new set of medium tyres. The two come back out on track in ninth and twelfth position respectively. Quickly Max overtakes George Russell, and not much later Lance Stroll. 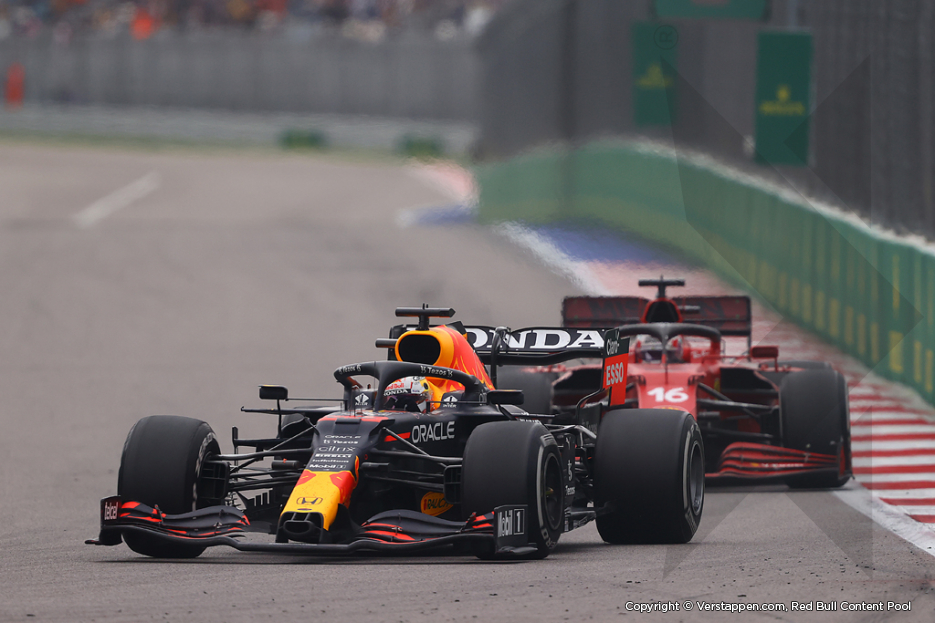 But then the progress stops when Max joins the train formed by Pierre Gasly, Carlos Sainz, and Daniel Ricciardo. Gasly comes in for a pitstop relatively quickly, but it turns out to be challenging for Verstappen to pass the McLaren and Ferrari. Sergio Pérez comes out in front of his teammate despite a slow pitstop. Then Verstappen is also overtaken by Fernando Alonso, causing the Dutchman to fall back into seventh position.

It looks like Max is going to finish the race in seventh position, until it starts to rain in the final phase of the race. At once it turns the race upside down. Lewis Hamilton closes in on race leader Norris, who decides to continue. Hamilton does come in for intermediates and it turns out that this was the right decision. The rain gets heavier, and Norris has a hard time to keep his McLaren on track. Two laps before the end Hamilton passes him, after which Norris also comes in.

Verstappen also changes to intermediates and takes his RB16B miraculously into second position. Even though Hamilton wins the race, this limits the damage for the championship. Calos Sainz finishes in third position. Lando Norris eventually finished seventh.