Published on 10 October 2021 by Mike Motilall 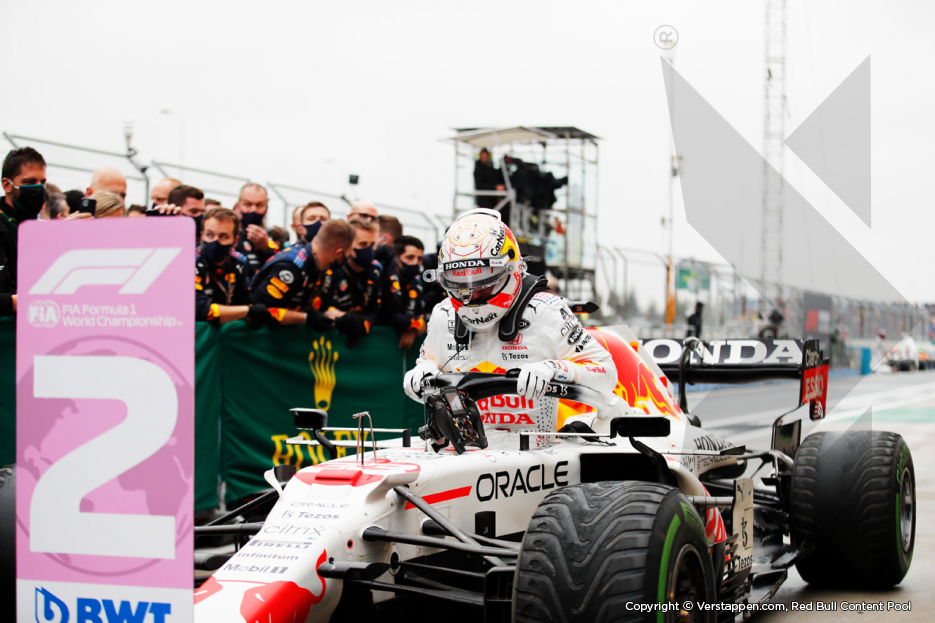 Max Verstappen finished second fastest at the Turkish Grand Prix. On the wet circuit, nearby Istanbul, the Dutchman spent almost the entire race behind Valtteri Bottas. Verstappen was not able to pose a threat to Bottas, enabling the Finn to take his first win of the season in quite a commanding manner. Finishing second puts Max back in the lead of the championship again as the other title contender, Lewis Hamilton, crossed the line fifth fastest. Sergio Perez rounded out the podium.

After the race, Max had the following to say: “It was not easy today. It also wasn’t such a pleasant race. The track was very greasy, we had to manage the tyres the whole race so we couldn’t really push. Because of the tyre wear we were eventually running on the tyre belt. It seemed that Valtteri had a bit more pace and could look after the tyres maybe a bit better as well. In these conditions it’s easy to get it wrong, overall I am very pleased.”

Despite the fact that Max has taken the lead in the championship again and that there are still six more races to go, Max takes it a race at a time: “It’s been close the whole year and I’m pretty sure in Austin it will be a good battle again with Mercedes. We are leading the championship again but I think that we are a bit too slow at this moment. So we just have to keep on pushing and keep on trying to improve and then we’ll see where we end up at the end. But so far this season has been really good.” 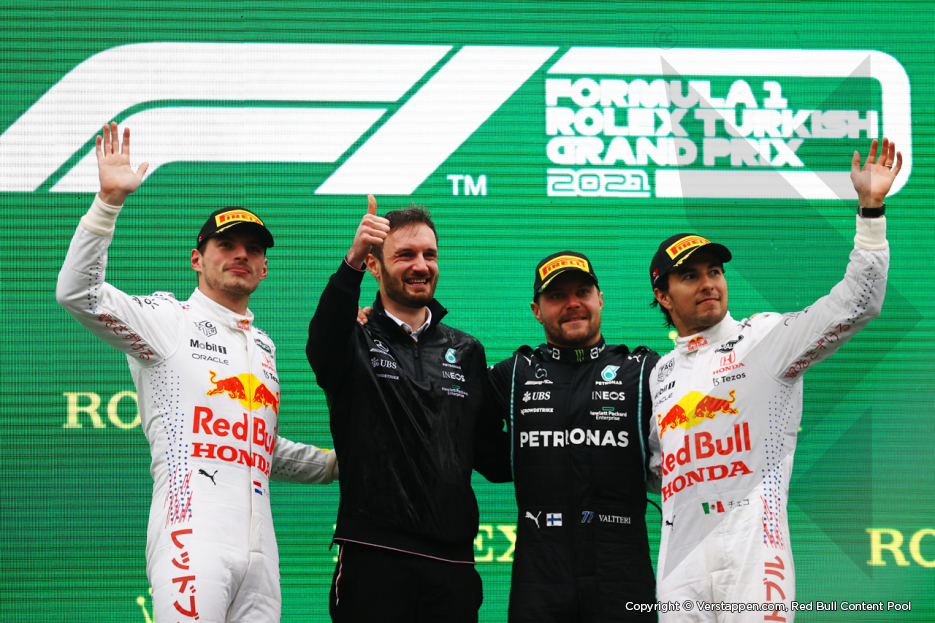 Before the start of the race it’s been drizzling continuously on the 5.338 km. long Istanbul Park circuit. This results in the whole field having to start on the intermediates. Max gets well off the line in second place and retains his position behind Bottas entering the first corner. Behind Verstappen is Charles Leclerc who is running in third place and Sergio Perez in P4. Pierre Gasly contacts Fernando Alonso sending the Spaniard spinning at the first corner. The Alpine-driver is able to continue on without any damages though. Not much later, Alonso in turn runs into Mick Schumacher, who also does a 360. The German is able to keep on going albeit that he is now running in 19th.

Hamilton, who was dropped to P11 due to a grid penalty, wins two places on the opening lap but gets stuck behind Yuki Tsunoda. It takes the Briton till lap eight before he is able to overtake the Japanese-driver, one lap later he makes little work of Lance Stroll in seventh. Hamilton continues with his push forward and overtakes his fellow countryman Lando Norris on lap eleven. Pierre Gasly becomes another victim of Hamilton’s when he is overtaken on lap 15, which puts the Briton now in P5. In the opening stages of the race, Max is not able to launch an attack on Bottas. The deficit increases up to well over three seconds, but from lap 15 onwards Verstappen starts gaining on the Finn. Tsunoda spins on lap 22 at Turn nine, dropping the AlphaTauri-driver all the way down to P13.

On lap 34, a nice battle starts developing between Perez and Hamilton for fourth place. The Mexican is having great difficulties keeping Hamilton off his back. Verstappen heads in for his first pit stop on lap 38. The Red Bull Racing-crew swap his old tyres for a new set of the intermediates on the RB16B in a lightning 2.1 seconds. As a consequence Max rejoins in third. Race leader Bottas pits one lap later and rejoins well ahead of Max. Sebastian Vettel tries his luck by switching to slicks but this has been a terrible gamble. Slipping and sliding the German returns to his team to strap on the intermediates. 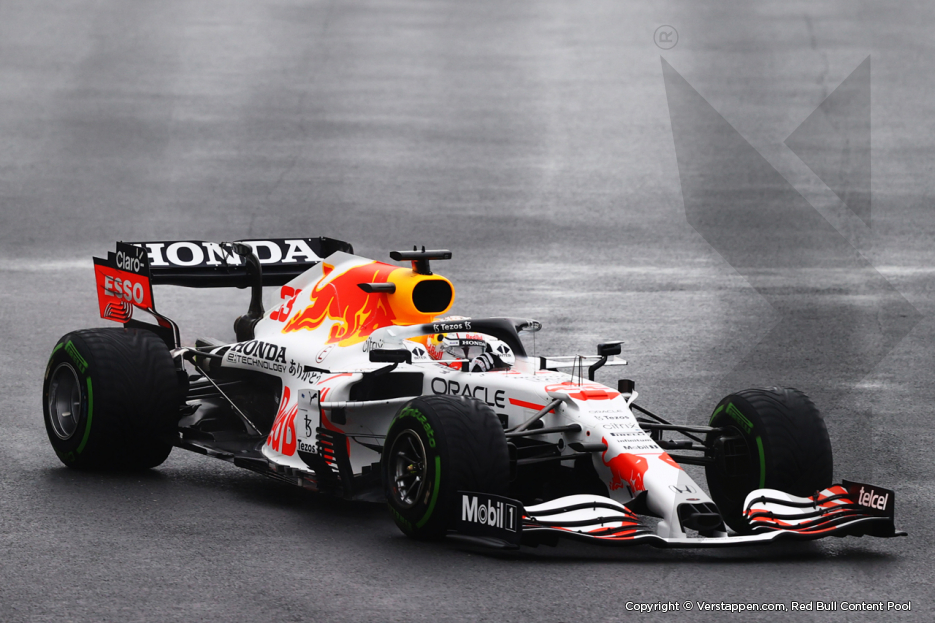 Because of Bottas and Verstappen having to do their pit stops, Leclerc becomes race leader. The Monegasque keeps on running on his worn intermediates but is unable to keep up with the pace and is easy prey for Bottas on lap 47. One lap later, Leclerc eventually decides to change his tyres for new intermediates which drops him down to P4. This results in Max being back in P2 with Hamilton behind him in third. Hamilton pits on lap 51 for a new set of the intermediate tyres and rejoins in fifth. This puts Leclerc in third while Perez is now running fourth fastest. Perez engages Leclerc on the very same lap and makes little work of the Ferrari-driver at Turn twelve.

At the front, Bottas takes his first win of the season quite commandingly. The Mercedes-driver also takes the additional point for the fastest lap. Max comes in second fastest which puts him at the top again of the championship standings. Perez crosses the line in third and gives Red Bull Racing a double podium. Charles Leclerc is fourth with Hamilton behind him in fifth. Pierre Gasly takes the flag sixth fastest, while Lando Norris, Carlos Sainz, Lance Stroll and Esteban Ocon round out the top ten. The Frenchman is the only driver to have finished the race without a pit stop.