Published on 07 November 2021 by Kees-Jan Koster 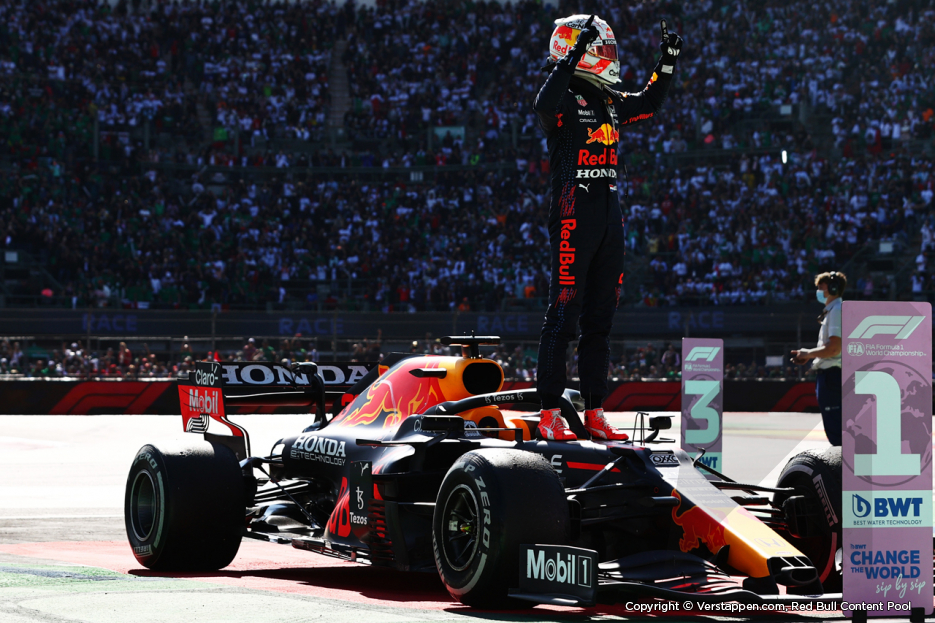 Max Verstappen won the Mexican Grand Prix for the third time in his career. Max had a great start from third on the grid and braked extremely late in turn one, overtaking both Mercedes on the outside and taking the lead. From then on Verstappen increased the gap to Hamilton and drove unthreatened to his nineth victory of the season. Hamilton finished second so Max increased his lead in the championship to nineteen points. Sergio Perez finished third in front of his home crowd.

After the race Max starts with some words of praise for the ecstatic crowd in Mexico: “It was incredible. To have ‘Checo’ as teammate here in Mexico is amazing, but even before that the fans have been incredible. They love Formula 1, so it is really nice to be here.”

Verstappen explains his blazing start: “The start was okay, but I had a good slipstream. The three of us were side by side when entering turn one, it was all about trying to brake as late as possible. I kept the car on track and went from third to first. That made my race, because then I could just focus on my myself. We had an incredible pace in the car, and so I could just do my own thing.”

The disappointment after qualifying was quickly forgotten: “Qualifying was a petty, but we did not get it right with the tyres, which is crucial on this track. I was confident that it would go alright today, but of course you will have to overtake them. When you are stuck behind another car everything overheats, so it was crucial to overtake the Mercedes straight away.”

Even though Max has increased his lead in the championship again, he is not yet thinking of being champion: “We still have a long way to go. It is looking good, but it can turn around quickly. I am looking forward to Brazil, I have very good memories there.” 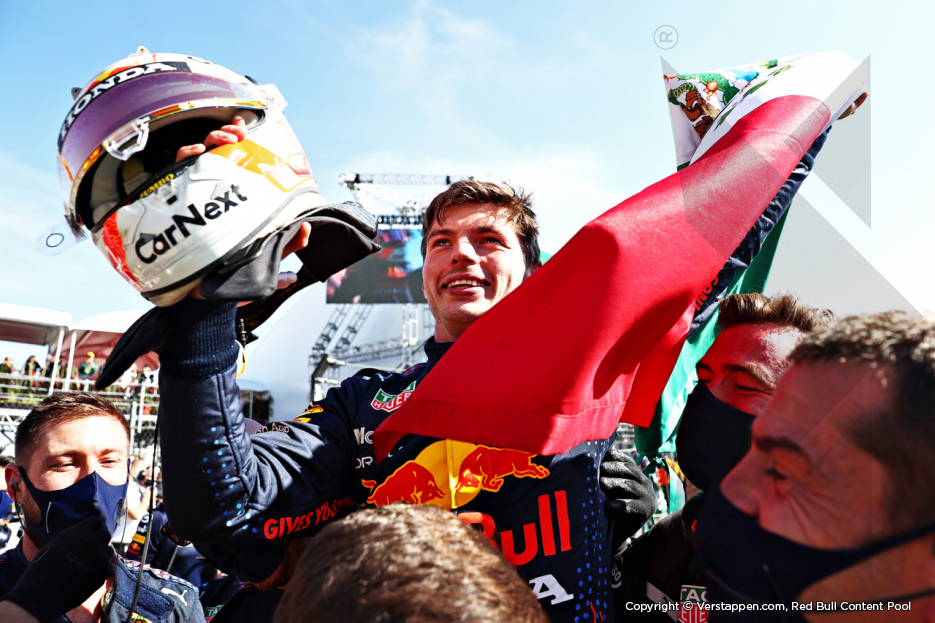 It was hot and sunny at the Autódromo Hermanos Rodríguez where the grandstands were crowded with the fans of Sergio Perez. Max has a great start from third on the grid and is straight away in the slipstream of both Mercedes. Max brakes extremely late at the end of the long run to the first corner, and overtakes Hamilton and Bottas on the outside taking the lead of the race. Bottas was hit by Daniel Ricciardo in turn one and the Finn spun around. Behind that Esteban Ocon, Mick Schumacher and Yuki Tsunoda make contact, and the rookies Schumacher and Tsunoda have to park their damaged cars alongside the track. The Safety Car comes out on track to recover the stranded cars. Verstappen is in the lead, followed by Hamilton and Perez. Pierre Gasly is in fourth position. Bottas fell back into last position because of his spin, and Ricciardo has to get into the pits for a new front wing.

The field is released in lap five. Max has a good restart, so that Hamilton does not get a chance to attack the Dutchman. Then Verstappen increases his lead to his title rival lap after lap, while Perez can keep up well with Hamilton. Hamilton comes into the pits in lap 30. The Brit changes to the hard tyre compound and comes back out on track in fifth position. Verstappen continues a couple more laps and comes into the pits in lap 34. In a faultless pitstop of 2.2 seconds are his medium compound tyres changed by the Red Bull Racing pit crew to a set of hard tyres. Verstappen comes back out on track in second position, well ahead of Hamilton, but behind teammate Perez who still has to make his pitstop. The Mexican continues to lap 41 before also changing his tyres. Perez comes back out on track in third position and is then nine seconds behind Hamilton. Verstappen is back in the lead because of the pitstop of Perez and is ten seconds ahead of Hamilton. 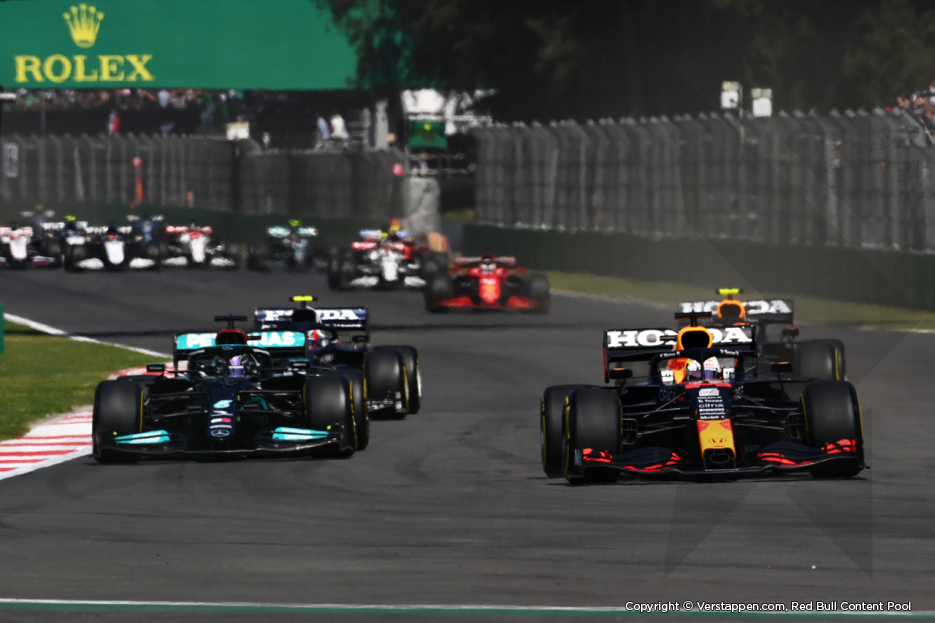 On fresh tyres Perez closes the gap to Hamilton, and with ten laps to go he gets within DRS range of the Mercedes driver. But even though Perez tries a couple of times to overtake, he is not able to succeed. In the lead Max wins his nineth victory of the season with a generous margin of sixteen seconds on Hamilton, who finishes second. Sergio Perez finishes behind the Brit in third position, making him the first Mexican to finish on the podium in his home race. Pierre Gasly finishes fourth for AlphaTauri, with behind him both Ferraris of Charles Leclerc and Carlos Sainz in P5 and P6. Sebastian Vettel finishes in P7, while Kimi Raikkonen, Fernando Alonso and Lando Norris complete the top ten. Max now has a nineteen point lead in the championship to Hamilton, with four races to go.