Max Verstappen second in crazy Saudi-Arabian GP: 'I gave it all'

Published on 05 December 2021 by Kees-Jan Koster 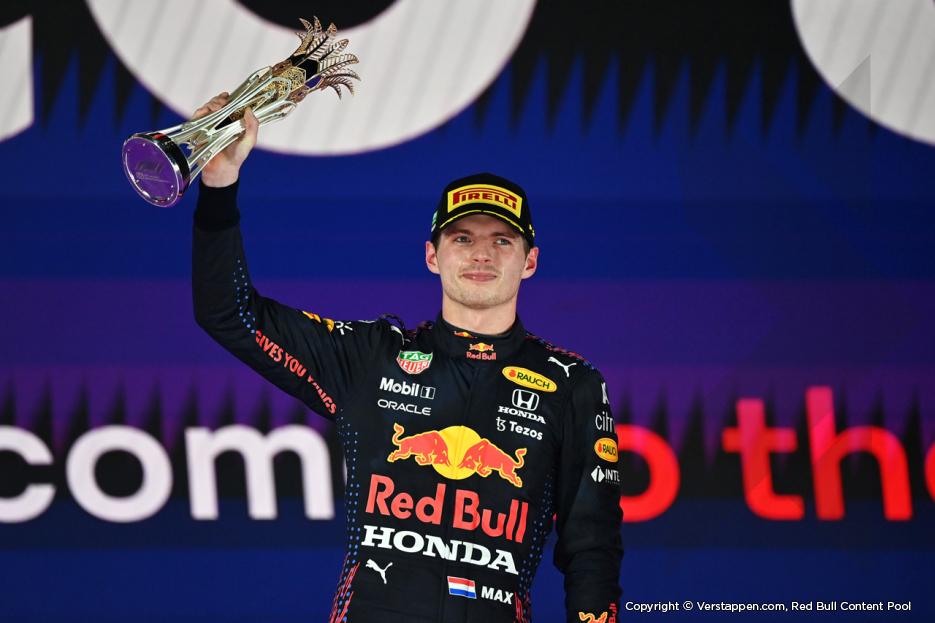 Max Verstappen finished second in a crazy Saudi-Arabian Grand Prix. The Dutchman started the race in third position on the grid on the street circuit in Jeddah but taking the lead under the safety car by staying out, while both Mercedes came into the pits for a new set of tyres. Then the race was red flagged giving Max a ‘free’ tyre change. The restart did not go so well for the Red Bull Racing driver who had to give up his place to title rival Lewis Hamilton when overtaking off the track after another red flag. Max got his act together and took again the lead of the race. A fierce battle commenced which led to a bizarre collision when Max tried to give the place back to the Mercedes driver. Both drivers were able to continue without much damage, but after five laps it was Lewis who drew the longest straw. Verstappen finished second after getting a five second penalty, when Valtteri Bottas overtook Esteban Ocon just before the finish line to finish third.

“It was an eventful race”, says Verstappen after the race. “A lot of things happened I do not fully agree with, but it is what it is. I gave it all, but I was not sure if the tyres were going to make it to the end. It was hot and very humid, so it was not an easy race. Especially when you lack some speed it was hard. We gave it everything and still finished second.”

The Red Bull Racing driver gives his view on the collision with Lewis Hamilton later in the race: “I slowed down to let Hamilton by, but he did not want to overtake. Then we touched, I do not understand what happened there.”

The title contenders are heading to the last race of the season with equal points. Max briefly looks ahead to the season finale in Abu Dhabi: “It will be decided there. Hopefully we have a good weekend.” 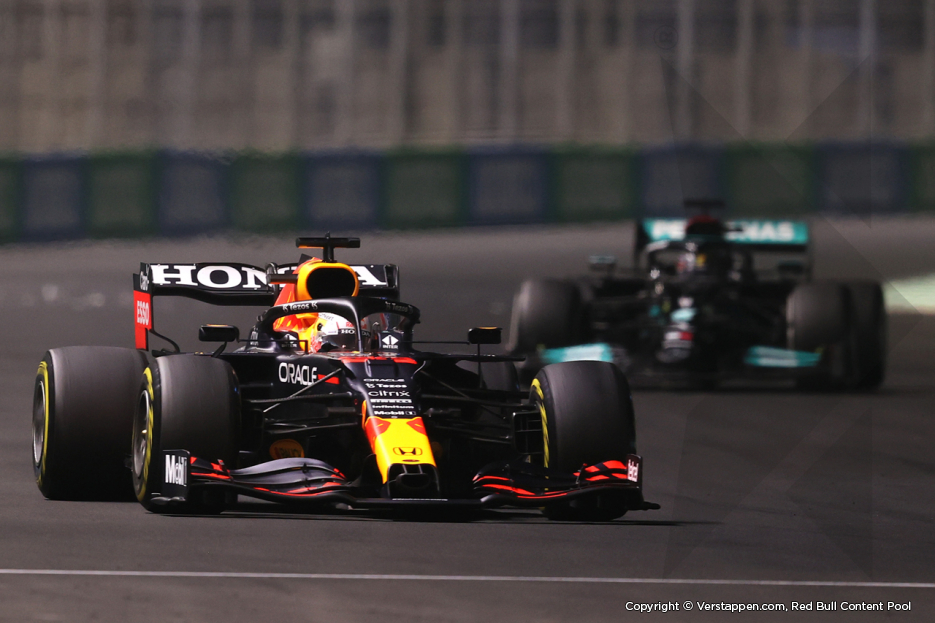 It is just after 18:30 Dutch time when the five red lights go out for the penultimate Grand Prix of the season. Max Verstappen has a good start from third on the grid but cannot overtake one of the Mercedes. Lewis Hamilton leads the pack and is the first to come over the line after the first lap, followed by Valtteri Bottas, Max Verstappen, Cherlec Leclerc, Sergio Pérez and Lando Norris.

After five laps Lewis Hamilton is one and a half seconds ahead of his teammate, who in turn is more than a second ahead of Verstappen. In the following laps the Dutchman stays within one and a half seconds, till the first safety car comes out: Mick Schumacher entered turn 22 to fast and crashes into the barriers. The young German can get out of the car unharmed, but his Haas is heavily damaged.

The Mercedes team decides to pit both cars for a new set of hard tyres. Valtteri Bottas seems to be very slow towards the pitlane, to Max’ annoyance who expresses his frustration over the radio. Verstappen stays out and takes the lead of the race. Not much later the race is red flagged to repair the Tecpro barriers. An advantage for Max who can swap his tyres to the hard compound. 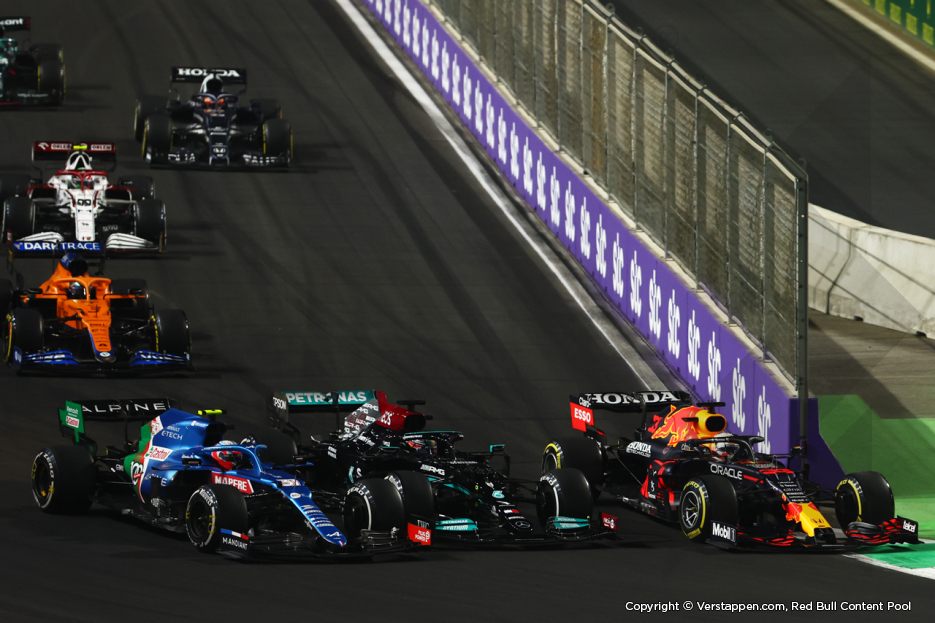 The drivers get back the grid 45 minutes after the start of the race for a restart. This time Max Verstappen does not have a good start. Lewis Hamilton takes his chance and overtakes the Red Bull Racing driver. Verstappen brakes late and comes alongside the seven-time world champion, but the Dutchman cannot take the corner. Hamilton diverts and is overtaken by Esteban Ocon in the Alpine who takes P2. Further down the field Sergio Pérez is spun by Charles Leclerc. Causing a chain reaction, so that Nikita Mazepin drives into George Russell and must retire from the race. We are in lap 16 when the race is again red flagged. Also, George Russell must retire his car.

When the field go back to the grid, Michael Masi decides that the overtaking move of Max was against the rules. Red Bull is offered to let the Dutchman start from third on the grid, behind Lewis Hamilton. Esteban Ocon starts from pole position. Max is back on the medium tyre and has a good start. He brakes late and overtakes Lewis Hamilton on the inside of the first corner. After the next corner he also overtakes Esteban Ocon and takes the lead of the race.

When starting the twentieth lap the top six is formed by Max Verstappen, Lewis Hamilton, Esteban Ocon, Daniel Ricciardo, Valtteri Bottas and Pierre Gasly. The gap to Hamilton is then one and a half second. The following laps are dominated by a couple of virtual safety cars to clear debris of the track. Caused by a collision between Yuki Tsunoda and Sebastian Vettel. The latter also collides with his former Ferrari teammate Kimi Räikkonen.

In lap 33 the field is released again. Max Verstappen and Lewis Hamilton have a twenty second lead to Esteban Ocon (P3) and continue their fight. Three laps later Hamilton is close enough to use DRS to overtake the Red Bull. The two drivers go side by side into the first corner, but Max prevails. But he goes wide again, and the team is advised to give the place to Hamilton. Verstappen slows down in the last sector, but by what looks like miscommunication Hamilton collides with the slowing Red Bull. 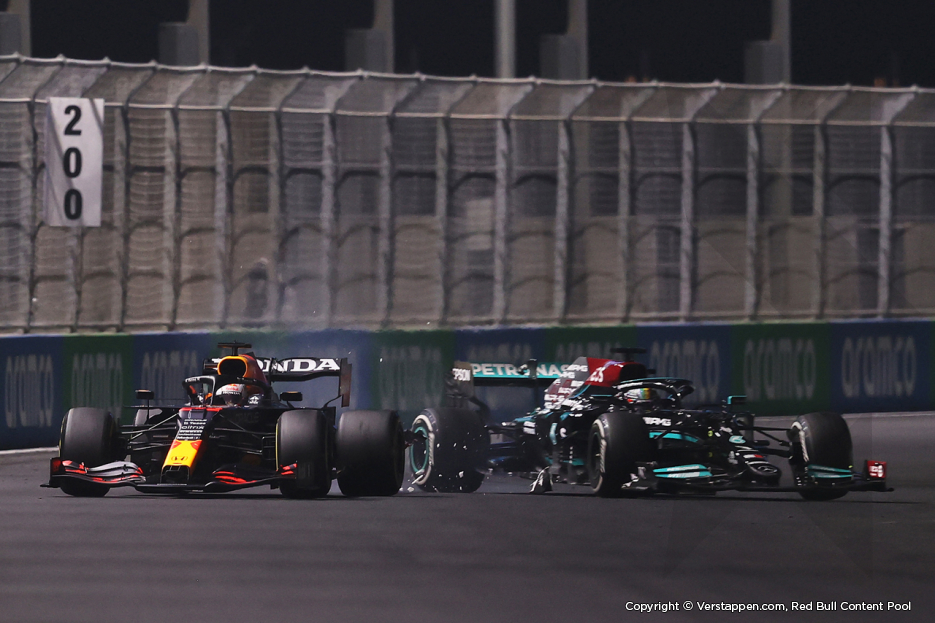 Both drivers can, with minimal damage, continue the crazy race, but Max is again told to give up the lead to Hamilton. This does not go very smooth, and Verstappen is still given a five second time penalty for one of the earlier overtaking moves, at which he gained an advantage off track.