Max Verstappen wins the Canadian Grand Prix: 'I was giving it everything I had' 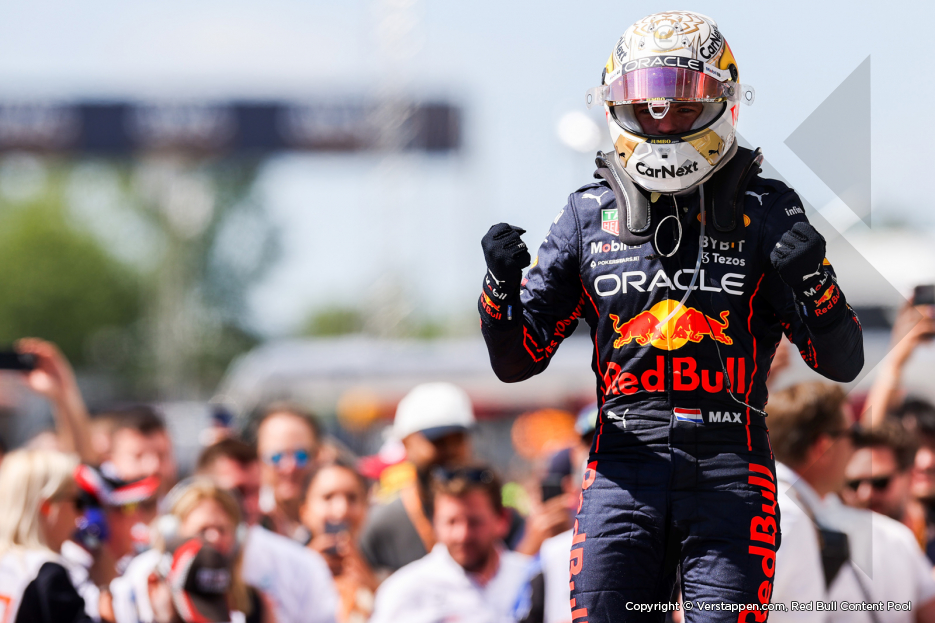 Max Verstappen won the Canadian Grand Prix. After an exciting final phase, in which he was constantly pressured by Carlos Sainz, the reigning world champion came over the finish line nine tenths ahead. For the 26th time the Dutch national anthem was played during the podium ceremony. Lewis Hamilton completed the podium in Montreal. His teammate Russell finished in fourth position. Charles Leclerc, who started the race from nineteenth on the grid, finished in P5. Max’ teammate Sergio Pérez, had to retire from the race. He had to park his RB18 in lap eight after suffering transmission issues. 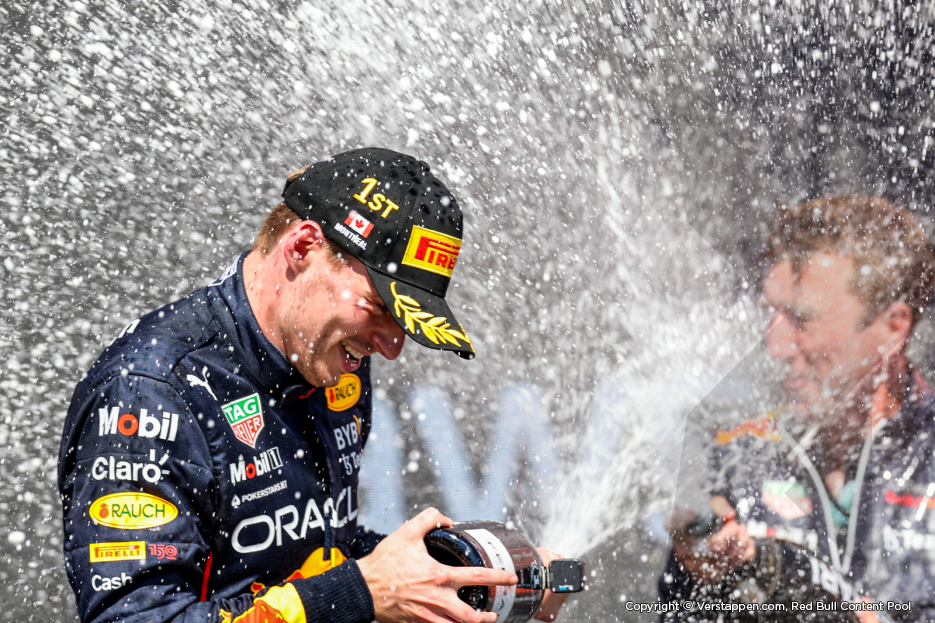 “The last few laps were a lot of fun”, says Max after the race. “I was giving it everything I had, and so was Carlos. Following is tricky around here, but I could see he was constantly pushing.”

Max came in for a pitstop, a couple of laps before a safety car. Thus, Sainz was right behind him on fresher tyres. “The safety car did not help. Ferrari was overall very quick in the race, so it would have been very difficult to close that gap to the end. I think I would have preferred attaching instead of defending, but luckily it worked out.”

After this race Max has increased the gap to his rivals in the championship. He is now 46 points ahead of his teammate, and 49 points ahead of Leclerc. Max: “We still have a long season to go, and a lot of things can happen or go wrong. We must try and prevent that. But this is of course very positive.” 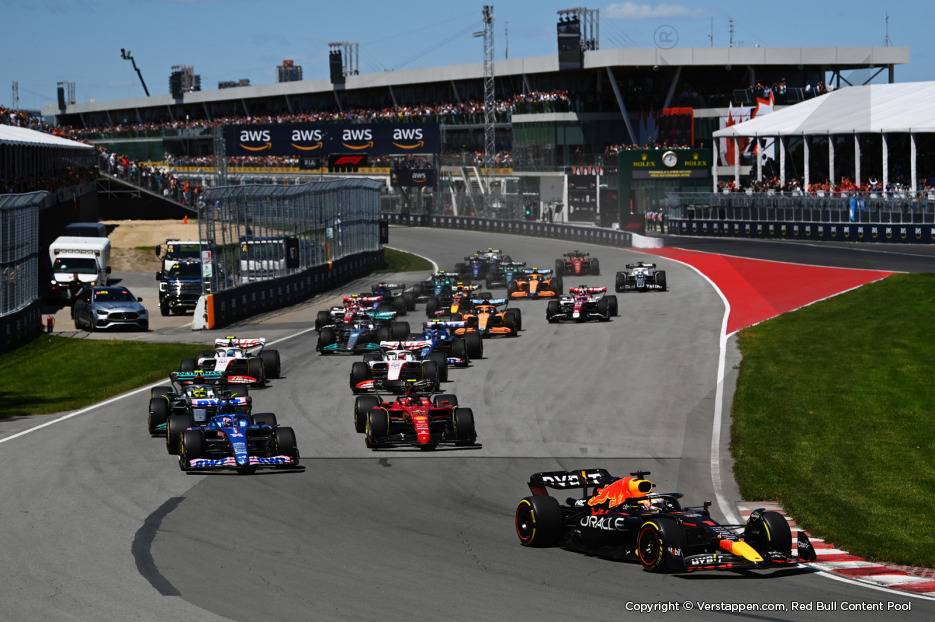 Two years after the last race on the Circuit Gilles Villeneuve there is another Formula 1 race in Montreal. After a good qualifying starts Max the Grand Prix from pole position. Next to him on the front row is Fernando Alonzo, starting for the first time in ten years from the front row on the grid. Sergio Pérez starts from P13, after crashing during qualifying. Charles Leclerc and Yuki Tsunoda start at the back of the grid because of grid penalties for changing components on their cars.

In contrast to yesterday it is dry today in Montreal, twenty degrees outside and a track temperature of 41 degrees. Because of yesterday’s rain there is a bit less grip on the circuit today. Max has a good start when the lights go out and quickly gains a couple of car lengths on Alonso. The top five did not change during the first lap of the race. Carlos Sainz is closing in on his fellow country man for third position. Soon the Ferrari proves to be quicker than the Alpine and with the support of DRS makes Sainz the overtake for P2.

In lap eight Pérez must park his RB18 next to the track. The Mexican reports over the radio that he is not able to shift gears. Max takes the opportunity during the virtual safety car to make a pit stop like a few other drivers. He comes back out in third position on hard tyres, behind Sainz and Alonso, who both stayed out. The Dutchman is closing in on the Alpine and overtakes the Spaniard in lap sixteen. Now the hunt for Sainz starts, who is five and a half seconds ahead. 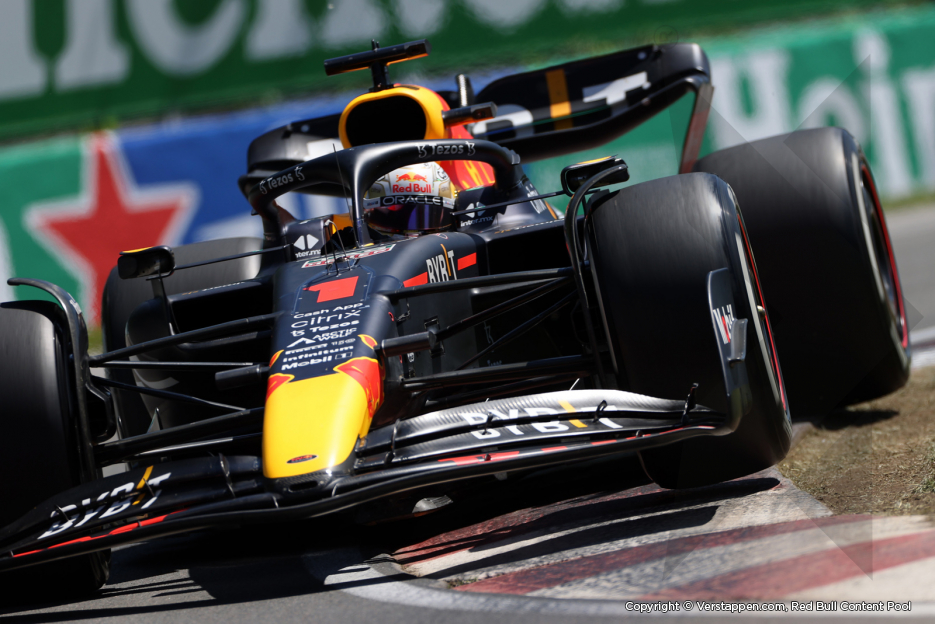 Meanwhile in lap twenty, Leclerc has moved up into P10. In that same lap there is another virtual safety car, as the Haas of Mick Schumacher shuts down. Many drivers come in, including Sainz who comes back out just in front of Hamilton in third position. Max is back in the lead after the stop of the Ferrari driver. But with new tyres Sainz easily gets passed Alonso, who has not made a pitstop yet. Alonso falls back into P4 when he is overtaken by his former teammate Hamilton. He finally makes his pitstop in lap 29 and has fallen back into P7. The top five is then formed by Verstappen, Sainz, Hamilton, George Russell and Esteban Ocon. Max reports over the radio that he is losing grip. It looks unlikely that the Dutchman will make it to the end of the race on this set of tyres.

Leclerc makes a pitstop in lap 42 and changes from hard to medium tyres. Because of a slow stop of 5.3 seconds, the Monegasque comes back out in twelfth position. One lap later comes Verstappen into the pits and changes to another set of the hard compound tyre. Although it was a decent stop taking 2.4 seconds he comes back out just behind Hamilton. One lap later Max regains P2 when Hamilton comes in for another pitstop. 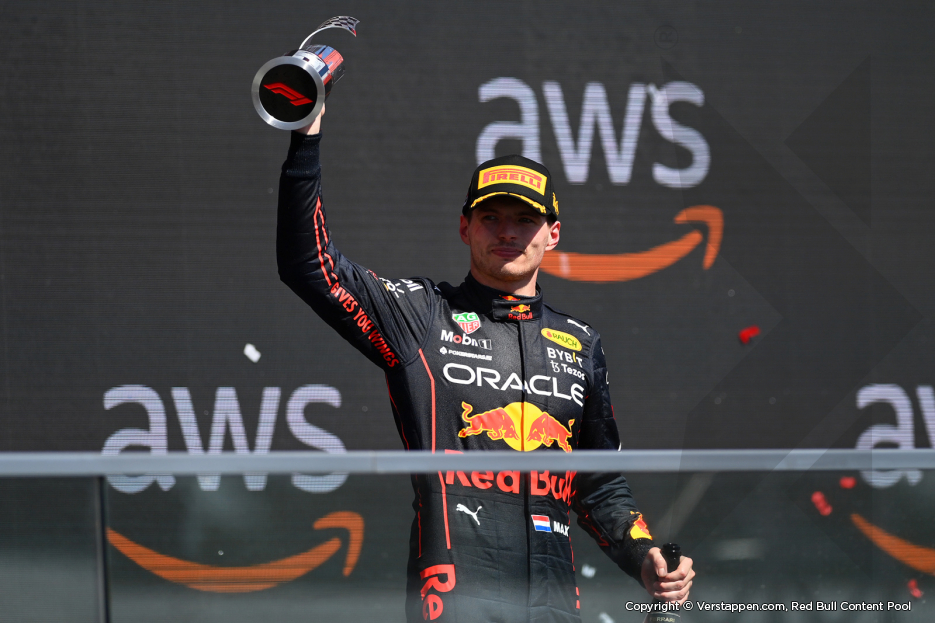 In lap 49 the safety car comes out after a crash of Tsunoda. The Japanese brakes to late when exiting the pitlane. The safety car is perfect for Carlos Sainz, who comes in from the lead of the race and changes to a new set of hard tyres. The stop of the Spaniard is not great: 3.7 seconds. But under the safety car he gets behind Verstappen, being on tyres six laps fresher. With sixteen laps to go the safety car comes back in. Sainz is right behind Verstappen after the restart. When the DRS is enabled again, he is still within one second behind Max. But even with the support of DRS the Spaniard cannot get passed Verstappen to get his first Formula 1 victory. Verstappen comes first over the finish line, nine tenths ahead of Sainz. Max increases his lead in the championship again. Hamilton finished third. Russell and Leclerc finish in P4 and P5, while Ocon and Alonzo complete the top seven.