Published on 02 October 2022 by Mike Motilall 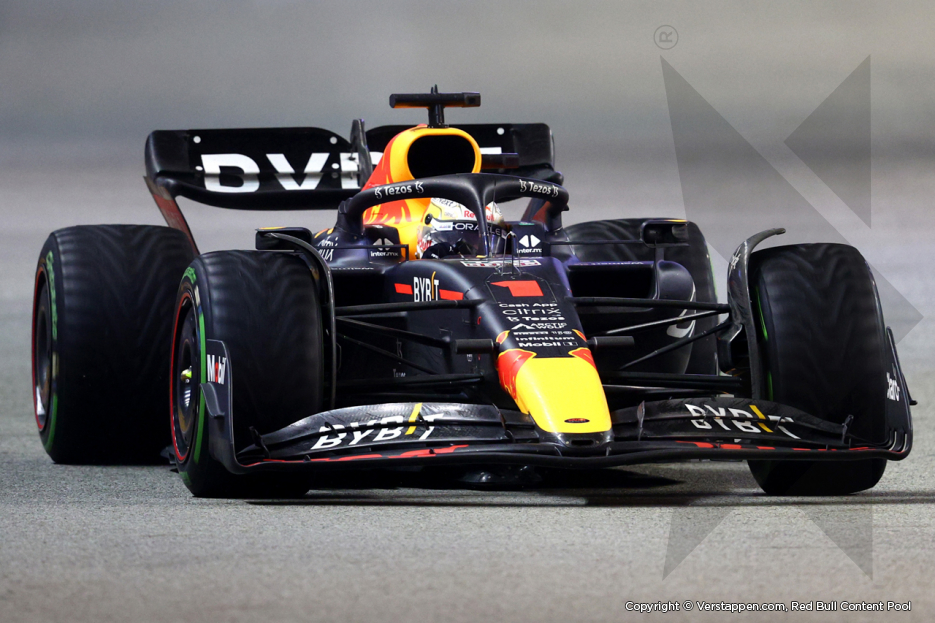 Max Verstappen came in seventh in a very tumultuous Singapore Grand Prix. The start of the race was delayed by well over an hour because of heavy rainfall. When the race finally got underway the track was still very slippery. Max got poorly off the line starting from P8 on the grid, but slowly moved up to P5. After the last safety car re-start, Max misjudged his overtake attempt on Lando Norris, this then forced him to head back in for a new set of tyres. The Dutchman rejoined at the back of the field, but managed to move back up to P7 at the finish. Red Bull Racing-team mate Sergio Perez won his second race of this season, followed by the Ferraris of Charles Leclerc and Carlos Sainz.

After the race, Max looks back: “It was a bad start. I dropped the clutch and the anti-stall kicked in. We need to analyze why that happened but because of that I lost a lot of spots. After that I tried to overtake a few cars, but that was very difficult because on this track it is very difficult to overtake. We were in fifth when I tried to overtake Lando on the slicks for fourth. When I got alongside I braked and bottomed out, then my front wheels jumped in the air. I locked up because of that and went straight on. Then I boxed again for new tyres because of massive flat spots. In the end I drove back into the points from the back of the field.”

“It’s of course not what you are here for but there was not much more in it than fourth place”, says a very realistic Verstappen, who realizes that his seventh place finish had been an ordeal by itself. “It started yesterday. It puts you in the middle of a train and when you even get a poor start, nothing goes your way. Because of that it was a very frustrating race. It is better to quickly forget this race and move on to Japan.”

In Japan, Max has another chance to win the championship, even though he is not bothered with that at this moment: “We are still leading the championship by 104 points, but I want a good weekend every time and this was just a frustrating weekend, it started yesterday in qualifying. It would be nice to turn champion in Japan but first we need to focus on driving a flawless weekend.” 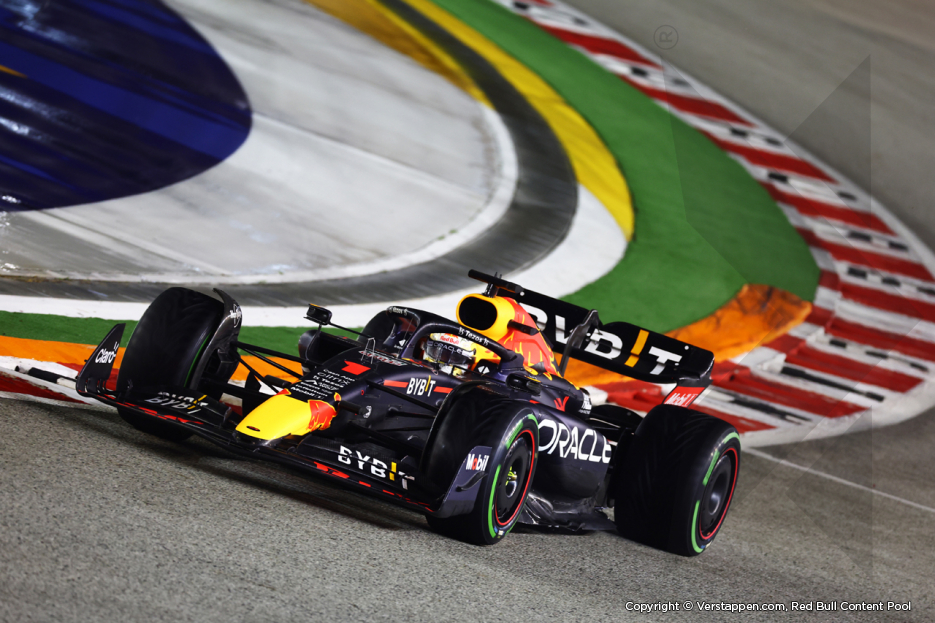 In the hours prior to the race, the Heavens open up on the Marina Bay Street Circuit. This causes the start of the race to be delayed by well over an hour. When the formation lap finally gets underway, it has stopped raining. But because there are still a lot of wet spots on the track, many drivers start the race on the intermediate tyres. George Russell starts from the pit lane in his Mercedes. Max gets poorly off the line starting from eighth and drops all the way back to P12. A fierce battle unfolds with Kevin Magnussen, who has to really work to keep Verstappen off his back. Sergio Perez has a better start off the line than pole sitter Leclerc, as the Mexican takes over the lead in the race. He is subsequently followed by Leclerc and Sainz in their Ferraris.

On the second lap, Max manages to find a way around Magnussen and is also able to take down Lance Stroll for tenth place. One lap later, Max passes Yuki Tsunoda and takes over P9. Nicholas Latifi fails to see the charging Zhou Guanyu in his mirrors on lap seven and the two drivers end up running into each other at Turn five. Zhou is forced to park his Alfa Romeo trackside with suspension damages, while Latifi limps back in his Williams to the pits; he is also forced to leave the battlefield. Because all of this, the Safety Car is deployed.

The field is let loose again on lap eleven. Verstappen has his wits about him and overtakes Vettel at Turn five. A few corners later, the Dutchman also takes down Pierre Gasly to claim P7 from him. At the front, Perez maintains his lead, followed by Leclerc and Sainz. Verstappen is quickly chasing down Fernando Alonso, who he is stuck behind of for quite some time already. Very unexpectedly Alonso hands over the sixth place to Max as the Spaniard is suddenly forced to park his Alpine trackside with technical issues on lap 21. Alonso, who has his 350th Grand Prix in Singapore, is not able to crown this milestone of having achieved the most Formula 1-race starts ever with a good result. A Virtual Safety Car is deployed and George Russell, who is running at the back of the field, seizes the opportunity to strap on the slicks. This gamble doesn’t pay off; when the green flag is waved, Russell is seconds per lap slower than the rest of the drivers on the intermediates.

On lap 26, Albon slides back-to-front into the wall at Turn eight. The British-Thai is able to return his car to the pits without any front wing but the Williams is too severely damaged to continue on. A brief Virtual Safety Car follows. Two laps later, Esteban Ocon drops out with some technical issue at Turn thirteen. Once more a brief VSC is triggered. 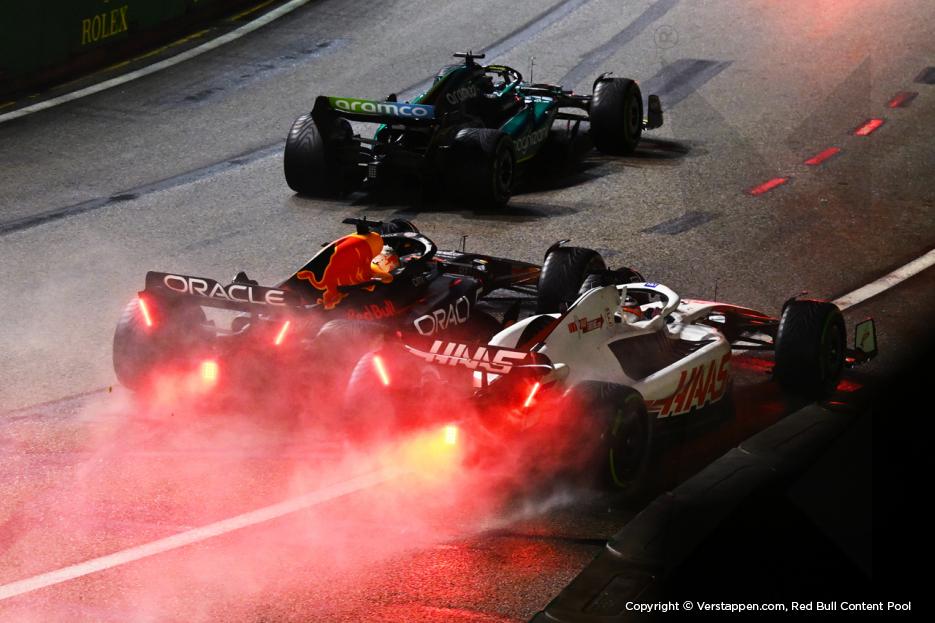 Lewis Hamilton has gone straight on at Turn seven on lap 33 and slips into the barriers. The Mercedes-driver is able to continue on and rejoins exactly in front of Verstappen. However, Hamilton has damaged his front wing and the Briton is forced to pit for a new one. Russell is now faster on his slicks compared to the rest of the drivers on the intermediates. This causes the entire field to change to slicks within a few laps, Max as well on lap 36. He changes his intermediates for the medium compound tyres and rejoins in fifth on track. Right at that moment, Yuki Tsunoda crashes out into the wall at Turn ten. The Japanese is able to exit his AlphaTauri unscathed and becomes the sixth driver to drop out from the race. The VSC is deployed once more. The top five is at that moment Perez, Leclerc, Sainz, Norris and Verstappen.

With still 35 minutes on the clock the field is let loose again. Verstappen immediately wants to engage Norris but locks up and goes straight on at Turn seven. He rejoins in eighth but has flat spotted his Pirellis, this forces the Dutchman to make an additional pit stop as he then switches to new soft tyres. Due to this extra stop, he drops back to P14 but quickly moves up to P12. This is because both Mick Schumacher and George Russell suffer a flat tyre resulting from an incident.

Max quickly makes short work of Magnussen, he takes down the Dane with still 20 minutes on the clock and takes over P11. Max continues his push forward by respectively overtaking Valterri Bottas and Pierre Gasly with a little less than fifteen minutes left in the race. In the closing stages of the race, Verstappen gets stuck behind Hamilton and Vettel. Because Hamilton locks up his brakes and goes straight on at Turn eight, Max is able to take over eighth place, on the last lap he ultimately relieves Vettel from P7.

At the front, Perez resists Leclerc pressuring him and subsequently takes his second win this season and Red Bull Racing’s sixth in a row. Leclerc’s and Sainz’ Ferraris finish second and third with behind of them both McLaren’s of Lando Norris and Daniel Ricciardo. For Ricciardo this fifth place is his best finish this season. Even Lance Stroll scores his best season’s finish with his sixth place. Behind him, Verstappen is seventh fastest, Sebastian Vettel, Lewis Hamilton and Pierre Gasly round out the top ten.

Max Verstappen has a 104 points lead in the championship compared to his immediate competitor Leclerc. This could enable the Dutchman to clinch his second F1-world title at the coming Japanese Grand Prix.