Max and Hamilton crash at Monza: 'Two persons needed to make the corner'

Published on 12 September 2021 by Mike Motilall 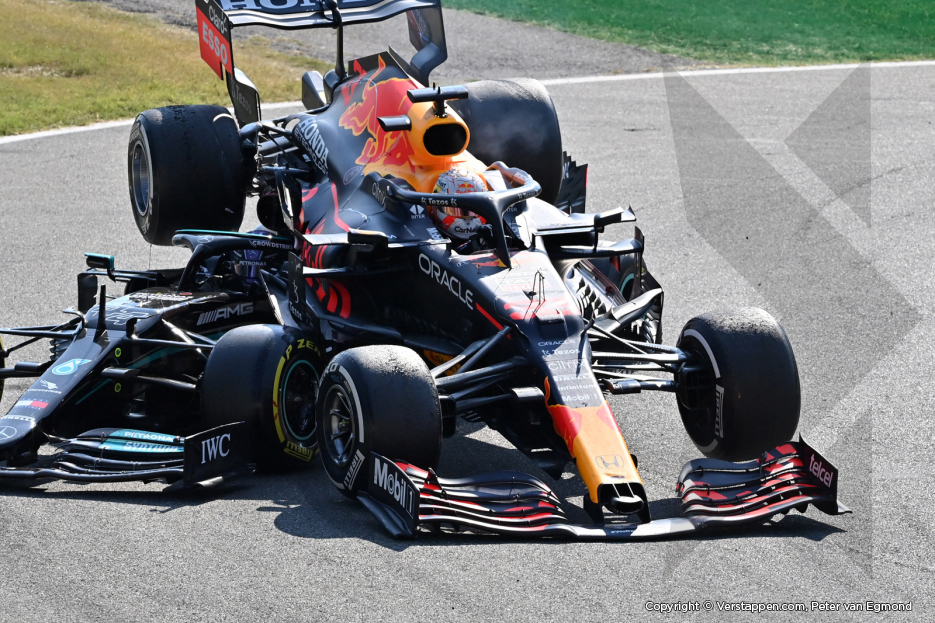 Both Max Verstappen and Lewis Hamilton crashed out at the Italian Grand Prix after the duo collided with each other at the first chicane as the Red Bull Racing-driver was trying to overtake the Mercedes. The McLarens managed to pull off a big surprise by coming in one and two on Monza. Daniel Ricciardo drove a flawless race and with Lando Norris in his wake the party for the British team was complete. Sergio Perez came in third, but was dropped to fifth as he was handed a time-penalty. Valtteri Bottas, who started at the back of the field, rounded out the podium in third place.

“During the race many things happened that, from our perspective, were not good”, Max starts off after the race. “I had a poor start because we had less grip than yesterday and I didn’t get well off the line. Our strategy was also not good because we got an undercut, we will need to analyze that. During my pit stop something went wrong at the right front wheel while we are normally very good at doing pit stops.”

Regarding the collision that led to retiring from the race, Max says: “We were very close to each other at Turn one and Hamilton kept squeezing me in the corner, this caused me to go on the green part to avoid us touching each other. Then I tried to go round the outside but he kept squeezing me. I didn’t expect that and it also was not necessary. At a certain point I didn’t have enough space to make the corner, that’s why we both went off.”

“I never want to crash of course. I just want to race cleanly”, says Max. “You need two people to make the corner together. If one person doesn’t want to work together, what can you do. I wanted to work with him, I wanted to race. Unfortunately we touched.” 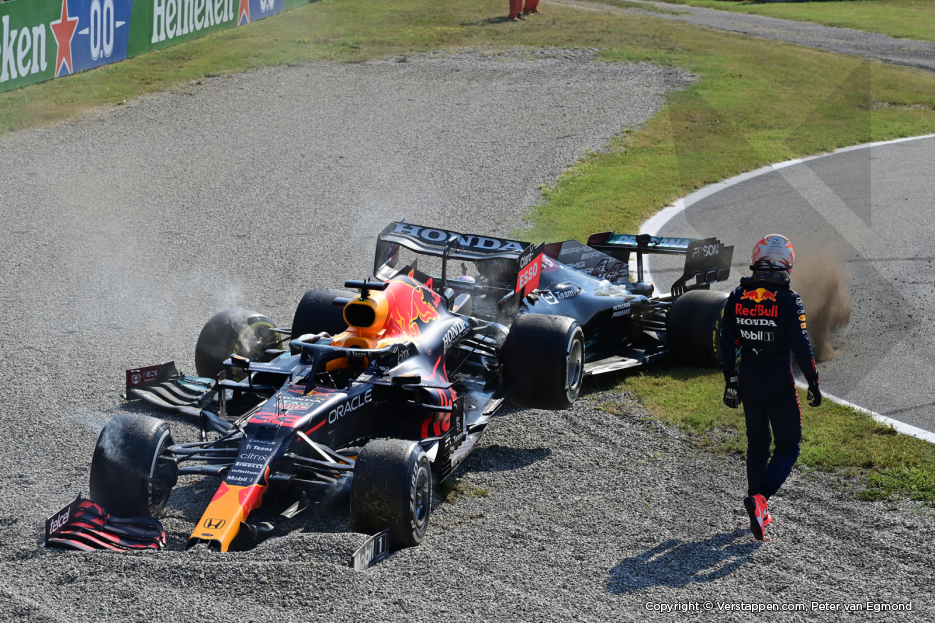 Even with pole position, Max doesn’t get well off the line, but Ricciardo however has a better start and immediately snatches the lead entering the first corner. The Dutchman briefly tangoes with Hamilton in the run up to the second chicane, both slightly touching each other, after which the Briton then loses a spot to Norris. Max retains the second place and ends up in between both McLarens.

In the midfield things go South for Antonio Giovinazzi, he misses the chicane and then gets hit by Carlos Sainz. This shortly triggers a virtual safety car and later ends up in a five-second time-penalty for the Italian for rejoining in an unsafely manner. Ricciardo is leading the pack ahead of Verstappen, Norris, Hamilton, Leclerc, Sainz and Perez.

Max is within DRS-range of Ricciardo but relays on the radio to his team that it’s difficult to get close. In the meantime Hamilton, who started on the harder compound, is mounting the pressure on Norris. On lap twelve he launches an attack, but the McLaren-driver manages to fend that off by the skin of his teeth.

Sergio Perez has by then gained some positions and overtakes Sainz for P6 as well, while Valtteri Bottas has climbed from the last spot all the way to P9.

On lap 18, Max tells his team that the rears are starting to slide. By then he has built up a six second lead on Norris. A few laps later, the Red Bull Racing-driver misses the chicane but is able to continue on.

Ricciardo comes in for his stop on lap 23 and mounts on the harder compound tyre. Max pits one lap later to get the same kind of rubbers but things went awry during his stop which lasted no less than eleven seconds. Hamilton has by then overtaken Norris, after which the latter comes in for his planned stop and rejoins just ahead of Max. 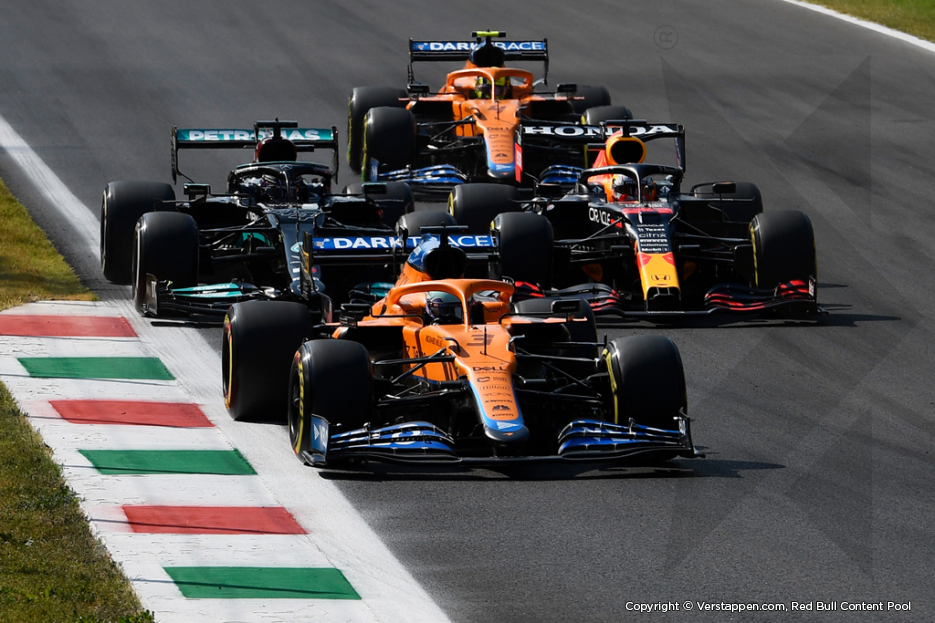 Then Hamilton also comes in but heads back out on track in between Norris and Max. Verstappen engages the Mercedes-driver immediately, but after they both come into contact with each other at the first chicane, the Red Bull ends up on top of Hamilton’s Mercedes. The two of them end up in the gravel trap and both title contenders are out of the race. The safety car is deployed and Leclerc is the one who benefits from this all: he is second after his stop, behind Ricciardo and ahead of Norris. Perez is running in fourth with Sainz and Bottas behind of him.

When the field is let loose again, Norris immediately attacks Leclerc and with one wheel on the grass he makes little work of the Ferrari as he takes over second place. Perez also takes on Leclerc and passes the Monegasque using the kerbs. For this offence he is handed a five-second time-penalty some time later. Not much later, Bottas follows suit and in a matter of a few laps, Leclerc loses three positions.

With still eighteen laps to go, both McLarens are making tracks, with Ricciardo leading at the front. Perez and Bottas are following close with right behind of them both Ferraris.

Bottas overtakes Perez with still ten laps to go, but the Mexican is not impressed and counters the Mercedes. When Nikita Mazepin parks his Haas F1-car trackside a virtual safety car is once more triggered. In the closing stages there are no changes in positions and Ricciardo wins the Italian Grand Prix. Norris completes the celebrations for McLaren as he finishes second fastest. Bottas rounds out the podium due to a time-penalty that was handed out to Perez and who was subsequently dropped to fifth.

Two hours after the flag dropped, the Stewards, who reviewed the incident between Hamilton and Verstappen, made their decision public. According to the Stewards, Max is predominantly to blame for the collision and as a consequence the Dutchman is handed a 3 place grid drop at the next Grand Prix in Russia as well as two penalty points.