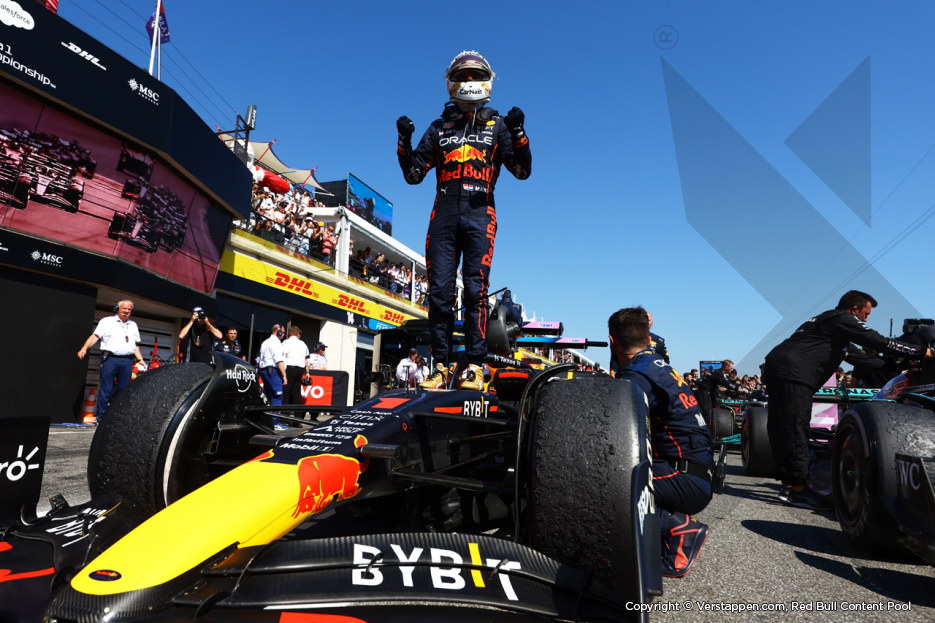 Max Verstappen took a controlled victory in the French Grand Prix. In a faultless race from the Dutch Oracle Red Bull Racing driver, he was joined by both Mercedes, with Lewis Hamilton and George Russell, on the podium. While Sergio Perez finished fourth. Charles Leclerc retired halfway from the race, when he crashed into the tyre barriers after making a mistake. Starting from the back, Carlos Sainz finished fifth.

“We had really good pace from the start, and I was putting pressure on Charles”, says Max. “Following around here with this heat, the tyres are overheating a lot, so I could not really go for a move. Only once in turn eleven. We tried to stay calm, we tried to stay close, and pitted a bit earlier. From there onwards you never know how the race will go, but the car was quick today.”

“Unlucky for Charles, I hope he is okay”, continues Max. “From there onwards I just did my race, looked after the tyres. Because of the pitlane being so long, you could not do another stop, but the tyres were wearing a lot. It was all about looking after the tyres to the end. We always tried to get the most points possible, and in that aspect today was a great day.” 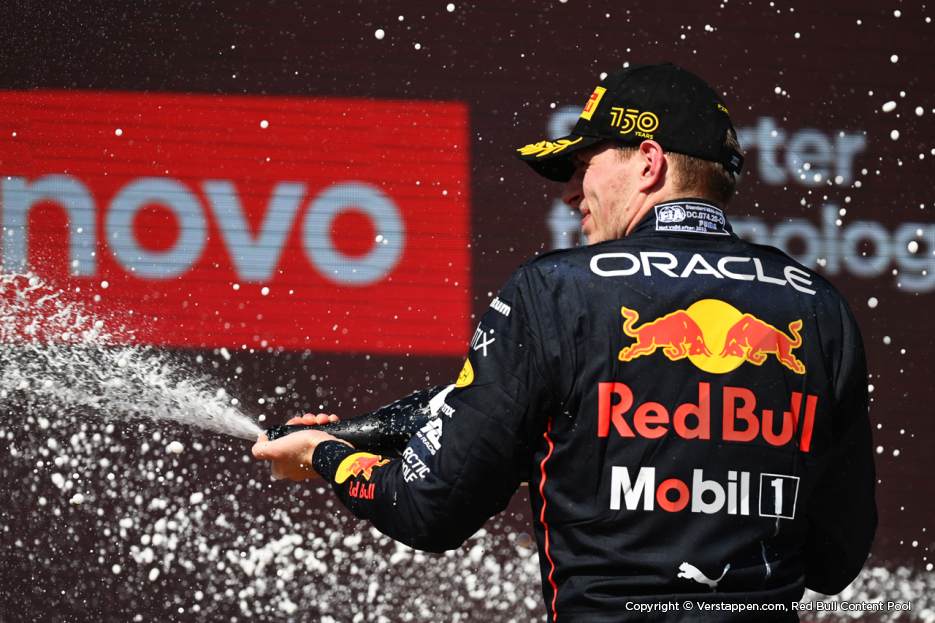 On the sweltering hot Circuit Paul Ricard, the race starts under clear blue skies. Leclerc can redeem his pole position for the lead of the race, while Verstappen follows closely. Meanwhile, Hamilton takes over third position from Perez. In the middle of the pack, it goes wrong between Ocon and Tsunoda, who is touched into a spin. Magnussen, who started from last place on the grid, had a superb start and is now in twelfth position. While Sainz, starting on hard tyres from the last row on the grid, is in thirteenth position after the first couple of laps.

When DRS is enabled after the third lap, stays Max within one second of the Ferrari and tries a couple of times to make a move on the Monegasque. After twelve laps Max falls out of DRS range and in lap sixteen the Dutchman goes into the pits, to change to hard compound tyres. Max comes back out on track in P7 and immediately overtakes Norris for P6.

In lap eighteen Leclerc crashes into the tyre barriers after losing the rear of his Ferrari. His race is over, and the safety car comes out. Almost everyone makes a pitstop, after which Max takes the lead, in front of Hamilton, Perez and Russell. Sainz is then in eight position and overtakes both McLarens after the restart to continue his race in sixth position. He also overtakes Alonso, and the Spaniard is then in P5. Meanwhile, Max continues to increase the gap to Hamilton.

Russell makes a mistake in lap 31 after which Sainz overtakes him on the outside for fourth position. However, the Ferrari driver did get a five second time penalty because of an unsafe release after his pitstop. When Sainz is in a fierce battle with Perez in lap 42, the team calls him in for another pitstop. The Spanish Ferrari driver does make that pitstop one lap later and comes back out on track in eighth position.

Meanwhile Russell tries to overtake Perez, at which the Brit touches the Red Bull car causing the Mexican to go straight through. It is deemed a racing incident and the Brit continues to put pressure on Perez. Sainz with new medium tyres overtakes Ocon, Norris and Alonso within a couple of laps and finished in fifth position. In the lead Max has expanded the gap to Hamilton to ten seconds.

With four laps to go, Zhou comes to a halt causing a short period with the virtual safety car. When the race is resumed, Russell is awake and immediately overtakes Perez for third position. The fight continues, with the roles reversed, but when the flag comes down, Russel takes the podium.

Max wins the French Grand Prix, his seventh victory of the season and with the associated 25 points he increases his lead in the Formula 1 championship to 63 points.